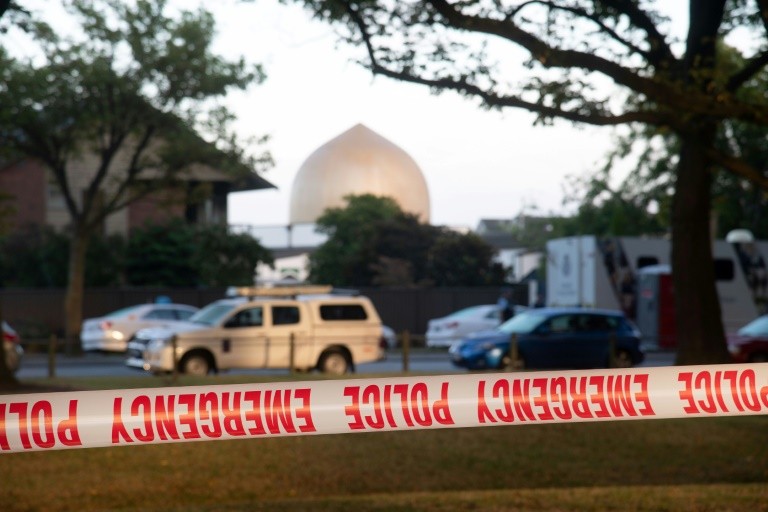 We’ve got a lot to learn about security.

In the wake of the horrific, tragic, and yes, terroristic mass murder in New Zealand, mosques around the world are pondering how to improve their security—and rightly so.  Sample headline from The San Diego Union-Tribune: “Mosque security tight around county after New Zealand shootings.”  As the article detailed, mosques are asking for extra patrols during services, and the police are being responsive; indeed, “patrol officers would keep an eye on all houses of worship overnight.”

It does appear, that for whatever sick reason, houses of worship are particularly vulnerable. Just here in North America, we might recall that in 2012, a crazy shot up a Sikh temple in Wisconsin, killing six.  And in 2017, another nut killed six at a mosque in Quebec City, Canada.  And in 2018, yet another psycho murdered 11 at a synagogue in Pittsburgh. That last shooting inspired Breitbart News’ Joel Pollak to write a blunt piece, entitled, “We Jews Have the Second Amendment; We Should Use It.”

In addition, over the last two decades, there have been fatal shootings at Christian churches in no less than 14 states.  The most notorious of these is no doubt the 2015 mass-killing at the Emmanuel African Methodist Episcopal Church in Charleston, South Carolina, which left nine dead.

So now, understandably, many American churches provide for their own security.  For instance, at the Ava Assembly of God, in Ava, Missouri, a team of 18 armed volunteers pulls watch duty.  One is reminded of the wisdom of the American science-fiction writer Robert A. Heinlein, “An armed society is a polite society.”

Indeed, it’s a safe bet that just about every potential target—which is to say, any place where the public gathers—is being eyed for a security upgrade.  As Breitbart News’ AWR Hawkins reported last month, security at the 2019 Academy Awards ceremony in Hollywood was “similar to when a U.S. president visits.”

Similarly, security details for prominent people, in both the public and private sectors, are sure to be beefed up.  Nobody, for instance, wants to see another shooting like the one that nearly killed Rep. Steve Scalise.  So in the wake of the New Zealand massacre, not only will security entourages get larger, but overall security plans—including panic rooms and even panic chutes—will become still more elaborate.

And who can argue that it should be otherwise?  It seems that in a crunch, just about every VIP agrees with the NRA’s Wayne LaPierre, who famously said, “The only way to stop a bad guy with a gun is with a good guy with a gun.”

Yet of course, from a security point of view, when bullets start flying, then, by definition, things have gotten out of control.  That is, everything else being equal, it’s best when no guns have to be drawn, and no bullets fired.  As the Chinese military philosopher Sun Tzu explained 2,500 years ago, the greatest victories are the battles that can be won without fighting.  In other words, beat the bad guy before he can attack.

So now, to apply Sun Tzu’s wisdom to the matter of security in a pluralistic and teeming society, we come to the issue of walls, including virtual walls—that is, anything that separates innocent people from those who would do them harm.  An effective wall, thus, is that which stops a killer cold.

We are all familiar with the idea of a wall as a form of national security; worldwide, it’s a tried-and-true safety measure—as any Israeli will tell you. And we might even get one here in the U.S. some day.

Yet in addition to protecting the frontier of a nation, walls also have value within the nation. Everyone appreciates the need for walls around personal property, of course, and yet walls also have great value in public places.  As it happens, this author has written extensively—here, here, here, and here—on the necessity of passive defenses, including bollards and other kinds of barriers, as a key form of public safety.

These days, too, many office buildings, in addition to bollards, have other barriers of a kind; they won’t let you in unless you have either an employee badge or an appointment, for which you have to show photo ID to a security guard.  Is that a hassle for the visitor?  Sure it is.  But it’s a comfort for the people inside the building.

Moreover, if we extend the idea of a wall into the realm of virtuality and metaphor, we can see that our airports are protected by virtual walls—all those security checkpoints.  (These checkpoints, of course, are backstopped by plenty of armed agents.)

Yes, it’s annoying to be scanned and maybe frisked on your way through the terminal, but it works.  That’s why we don’t have to worry—at least not as much—about 9/11-type catastrophes.  Indeed, the number of airlines hijackings worldwide, which peaked at 86 in 1969, has fallen to virtually none in recent years.

As an aside, we might add that the Department of Homeland Security, which was created only in 2002, now has a budget of nearly $50 billion.  Moreover, 1.1 million Americans now work as police officers, supplemented by 800,000 private security guards.  In other words, the thin blue line isn’t as thin as it used to be.  To which we can say, good.

In fact, we can extend the idea of separation-as-safety to other sectors, and in each case, the new security procedure is the result of painful lessons learned.  We might think, for instance, of seat belts and airbags; they’re a way of keeping passengers separate from sharp metal and other objects in a crash, and they’ve worked.  In the last half-century, the death rate per million vehicle miles traveled has fallen 80 percent.

And then there are those safety seals on bottles of vitamins and other medical products; yes, it’s a pain to peel off and punch through all that protective wrapping—and one can only guess how much all that material is contributing to climate change—but such annoyance is a lot better than being poisoned, as happened in Chicago back in 1982.

Moreover, new technology will also play a role in keeping us safe.  Today, there are at least 62 million security cameras operating in the U.S.

To be sure, some will say that all these security cameras are Orwellian, especially if they are supplemented by artificial-intelligence-powered facial recognition. These are valid concerns—even as, of course, more people are getting them for their homes and persons.

Still, because we must always weigh the equities of liberty and privacy, as well as safety and security, we Americans should be thankful that we have our Constitution, which is our ultimate shield—a civic shield—against harm.  It’s the Constitution that protects our rights, even as it empowers us to choose our public officials, and otherwise petition the government; it’s in that political give-and-take that we have our best hope of balancing sometimes clashing goals.

So we must grieve for those who were killed in New Zealand. And then let’s think hard and get ready for the next attack, because if we are prepared, maybe we can prevent it.