Paul VI was pope from 1963 to 1978 and oversaw the close of the Second Vatican Council, which introduced sweeping changes in the church, including the introduction of the use of local languages in the liturgy and a rapprochement between Catholics and other religions, notably the Jews.

The pope’s most controversial move during his turbulent, 15-year pontificate was the publication of the 1968 encyclical letter titled Humanae Vitae (“On Human Life”), which confirmed the church’s longstanding teaching regarding the immorality of the use of contraceptives to avoid pregnancy. Many inside and outside the church had expected Paul to overturn traditional teaching on contraception, along with the majority of the members of a special commission Paul had set up to study the question. 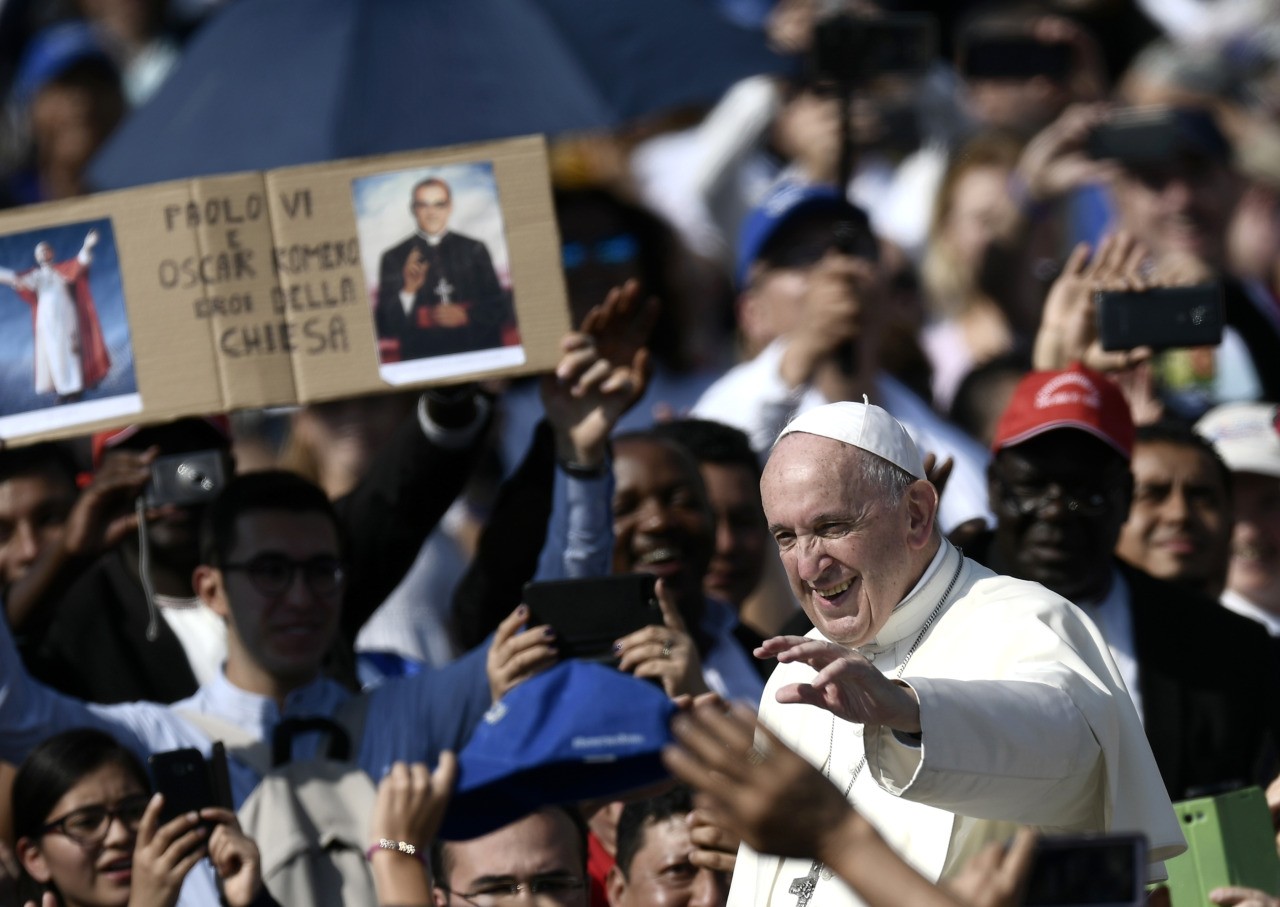 Pope Francis waves to the faithful after presiding over a canonization ceremony in St Peter’s Square at the Vatican, on October 14, 2018,  declaring Pope Paul VI and the martyred Salvadoran Archbishop Oscar Romero as models of saintliness for the faithful. (FILIPPO MONTEFORTE/AFP/Getty)

Pope Francis chose the year 2018 — the fiftieth anniversary of Humanae Vitae — for the canonization of Paul VI. Francis has often voiced his personal regard for Paul VI and has held up Humanae Vitae as a critically important document for today’s world.

In his 2016 letter, Amoris Laetitia (“The Joy of Love”), Francis cited Humanae Vitae four times, insisting that the teaching of Humanae Vitae “ought to be taken up anew in order to counter a mentality that is often hostile to life.”

A crowd of some 70,000 pilgrims, visitors, and dignitaries overflowed Saint Peter’s Square onto the Via della Conciliazione for the outdoor ceremony Sunday that took place under sunny Roman skies.

Among those attending the canonization Mass were Queen Sofia of Spain and the presidents of Italy, Chile, El Salvador, and Panama. The former Archbishop of Canterbury, Rowan Williams, was also present. Pope Paul VI is venerated among Anglicans, having reopened ecumenical dialogue with the Anglican communion in 1966 through a historic meeting in the Vatican with the archbishop of Canterbury Michael Ramsey.

For his part, Archbishop Oscar Romero was a controversial figure for his outspoken criticism of the Salvadoran military government during the 1970s. Touted as a champion of the poor for his denunciation of oppression, critics considered him to have crossed the bounds between pastoral leadership and partisan politics. 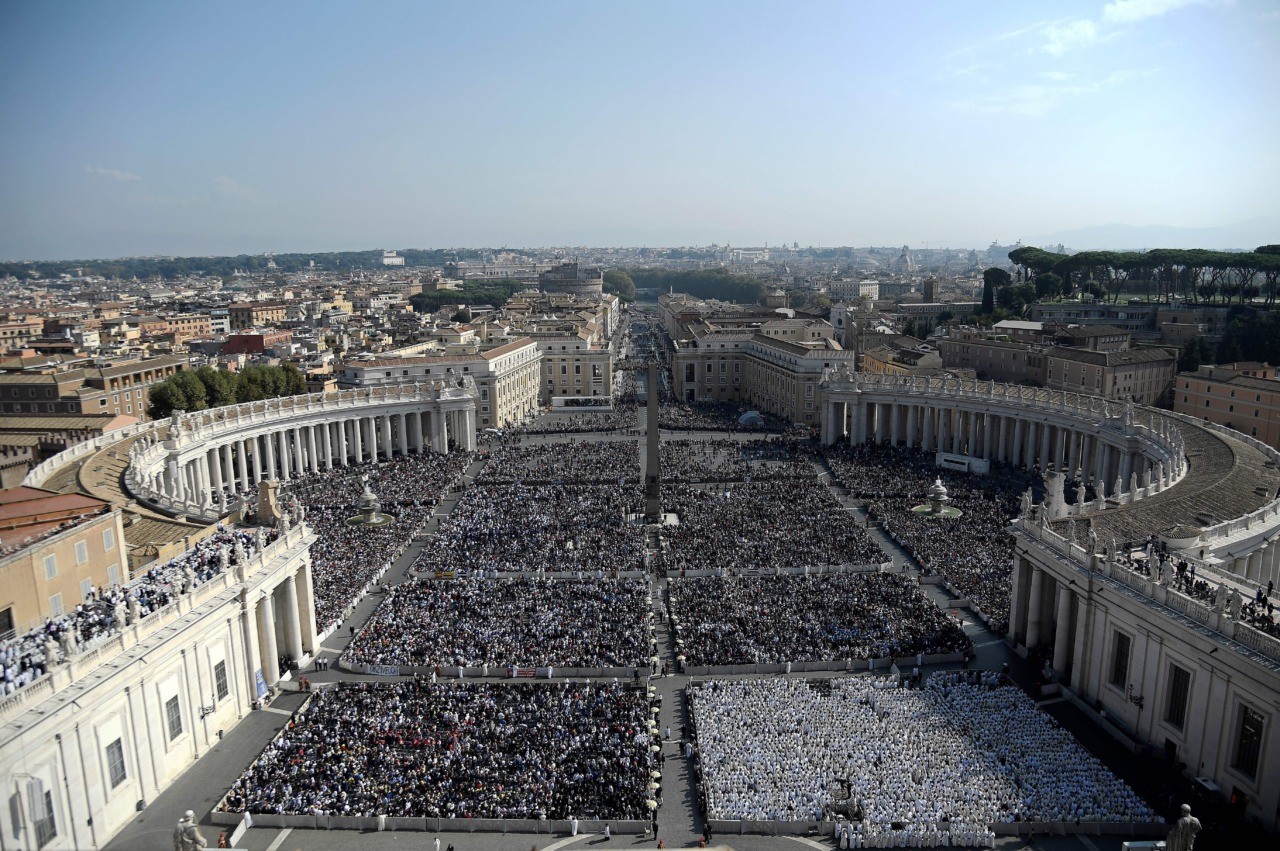 A general view of a mass for a canonization ceremony of Pope Paul VI and the martyred Salvadoran Archbishop Oscar Romero in St Peter’s Square at the Vatican, on October 14, 2018. (FILIPPO MONTEFORTE/AFP/Getty Images)

In his homily during Mass, Pope Francis said that Paul VI “spent his life for Christ’s Gospel, crossing new boundaries and becoming its witness in proclamation and in dialogue, a prophet of a Church turned outwards, looking to those far away and taking care of the poor.”

Even in the midst of fatigue and misunderstanding, Francis said, “Paul VI bore witness in a passionate way to the beauty and the joy of following Christ totally.”

“Today he still urges us, together with the Council whose wise helmsman he was, to live our common vocation: the universal call to holiness. Not to half measures, but to holiness,” he said.

For his part, Archbishop Romero, the pope said, “left the security of the world, even his own safety, in order to give his life according to the Gospel, close to the poor and to his people, with a heart drawn to Jesus and his brothers and sisters.”