BRUMADINHO, Brazil (AP) — Brazilian firefighters and Israeli rescue workers poked sticks into treacherous mud Monday looking for bodies as pressure mounted on the mining company responsible for a dam that burst and spilled a flood of iron ore waste.

By late in the day, the death toll rose to 65, with 279 people still missing, said Lt. Col. Flavio Godinho of the civil defense department in the southeastern state of Minas Gerais.

In a sign of the risks posed by the deep mud, Col. Alexandre Ferreira, a doctor with the military police of Minas Gerais, advised rescue crews, volunteers and journalists to take antibiotics to prevent cholera, the bacterial infection leptospirosis and other diseases.

Officials said the death toll was expected to grow “exponentially,” since none had been rescued alive since Saturday.

Search efforts were extremely slow because of the treacherous sea of reddish-brown mud that surged out when the mine tailings dam breached Friday afternoon. The mud was up to 24 feet (8 meters) deep in some places, forcing searchers to carefully walk around the edges of the muck or slowly crawl onto it so they would not sink and drown.

Teams focused their searches Monday morning in areas where a bus was immersed and where many workers were eating lunch at the mine cafeteria when the dam ruptured. 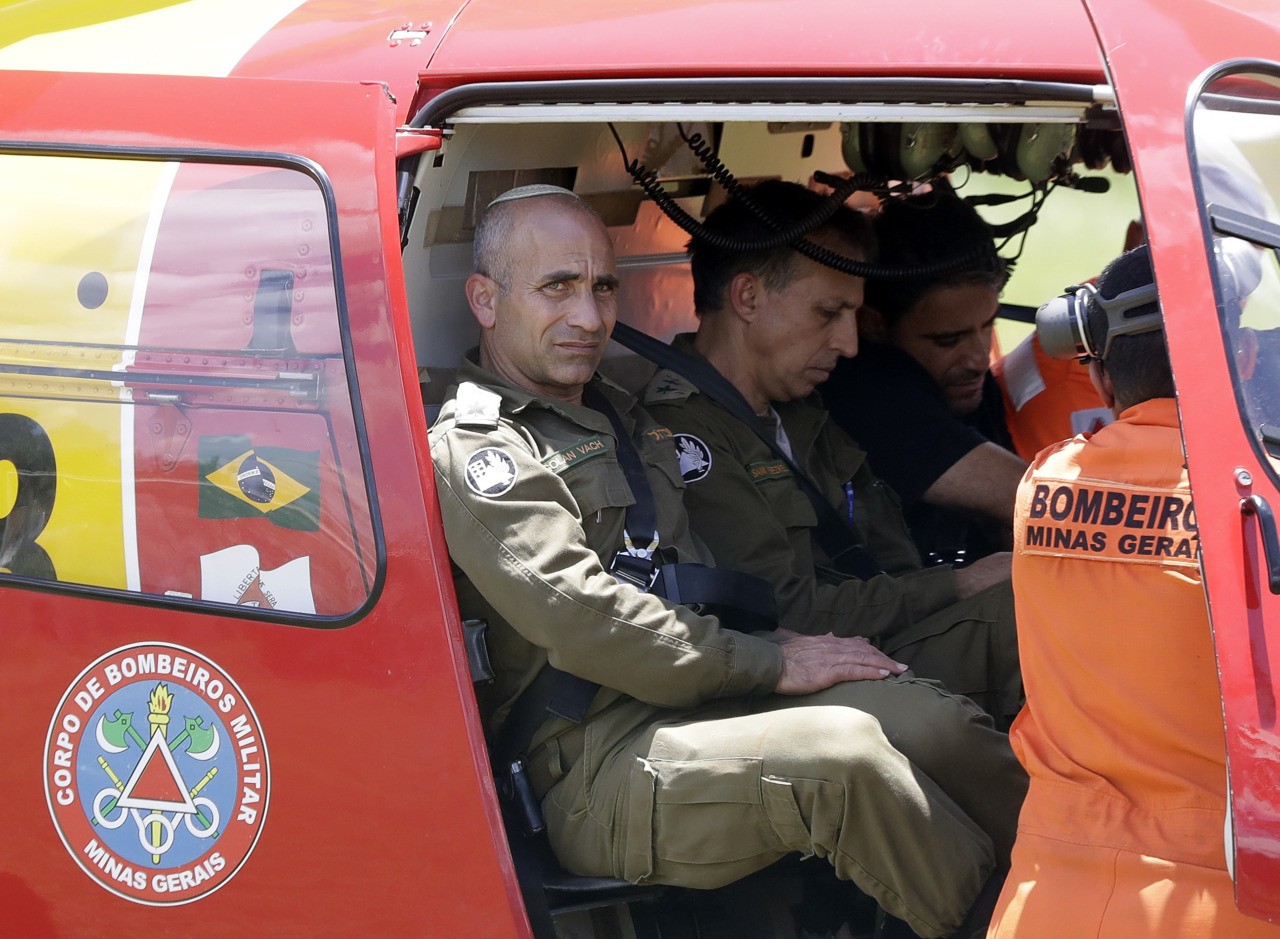 At the scene of the disaster, helicopters looking for bodies took off and landed nonstop. On the ground, dozens of rescuers with tracking dogs were searching for bodies through the mountains of mud. An Associated Press photographer witnessed at least 10 helicopters each carrying one body.

More than 100 Israelis equipped with specialized rescue technology joined the 200 Brazilian firefighters in the search.

The Israeli delegation is mostly made up of military search-and-rescue specialists and medical officers and also includes members of the Israeli Navy’s Yaltam scuba unit, as the military expected a significant amount of underwater missions in the flooded region.

The army said the search-and-rescue teams would use radar, underwater sonar, cellular detection systems and drones to locate the missing people.

Areas of water-soaked mud appeared to be drying out, which could help firefighters get to areas previously unreachable. Still, it was slow going for the search teams, residents were on edge and some started searching on their own for relatives. 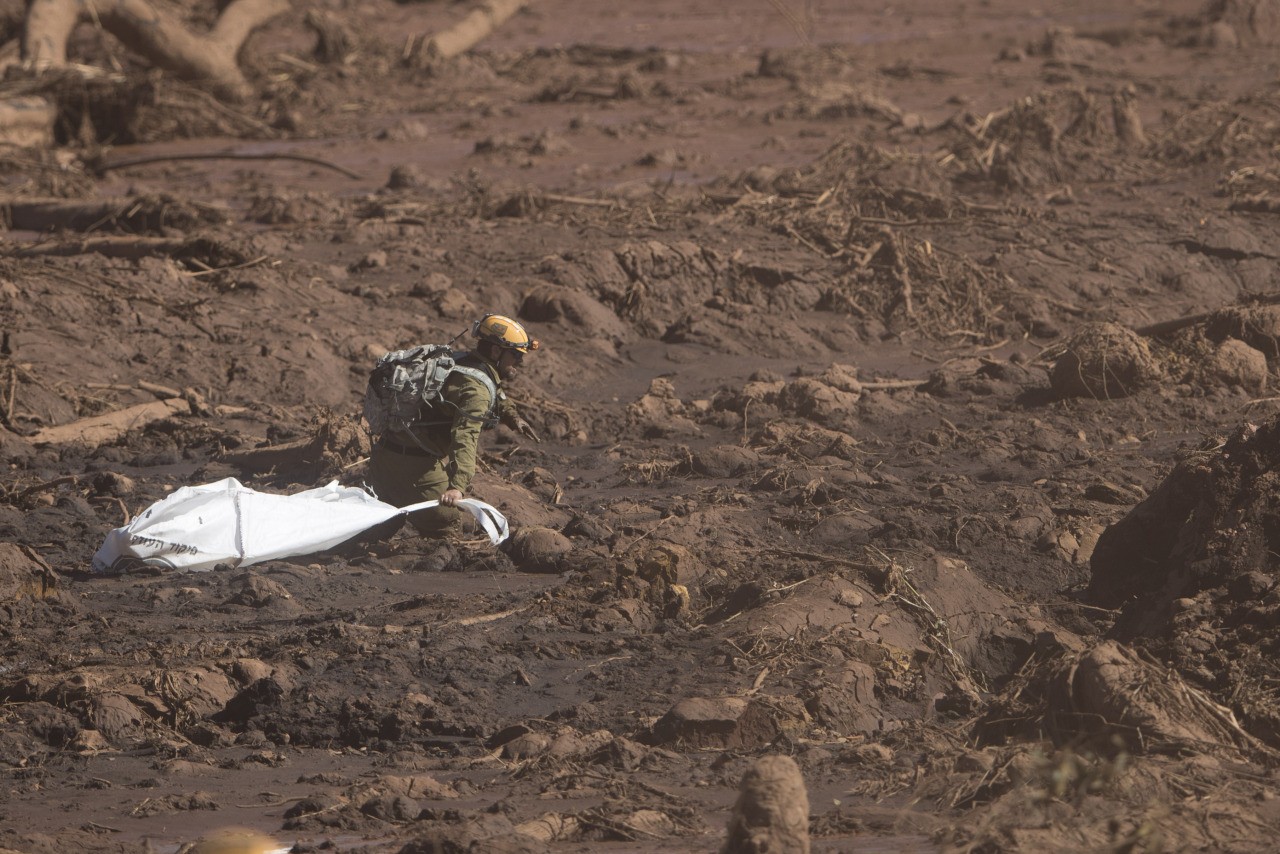 An Israeli rescue specialist drags an empty bag as he walks in the mud as he arrives at a site where a body was found inside a vehicle stuck in the mud, days after a dam collapse in Brumadinho, Brazil, Monday, Jan. 28, 2019. Firefighters on Monday carefully moved over treacherous mud, sometimes walking, sometimes crawling, in search of survivors or bodies four days after a dam collapse that buried mine buildings and surrounding neighborhoods with iron ore waste. (AP Photo/Leo Correa)

A Catholic priest for a church now being used as a command center for rescuers said many of his parishioners are believed to be buried in mud.

“It’s going to be difficult to rebuild our hearts,” said the priest, Rene Lopez. “This won’t take a month or a year. It’s an open wound for all of the people in Brumadinho.”

And there was mounting anger directed at Vale amid questions about the area’s largest employer following an apparent lack of a warning siren ahead of Friday’s collapse.

“The company didn’t take care of the people,” said Josefa de Santos, who has friends and neighbors among the missing. “I heard the cries of people asking for help, everyone was running and screaming. The siren didn’t go off at all, it was horrible.”

In an email, Vale told The Associated Press that the area has eight sirens, but “the speed in which the event happened made sounding an alarm impossible” when the dam burst.

Sen. Renan Calheiros called for Vale’s board of directors to step down and Attorney General Raquel Dodge told reporters that Vale executives could be held responsible.

Vice President Hamilton Mourão said a Brumadinho crisis committee established by the president was “studying” the possibility of removing Vale’s board of directors. His office later told AP that the government wouldn’t intervene, as Vale is a private company. 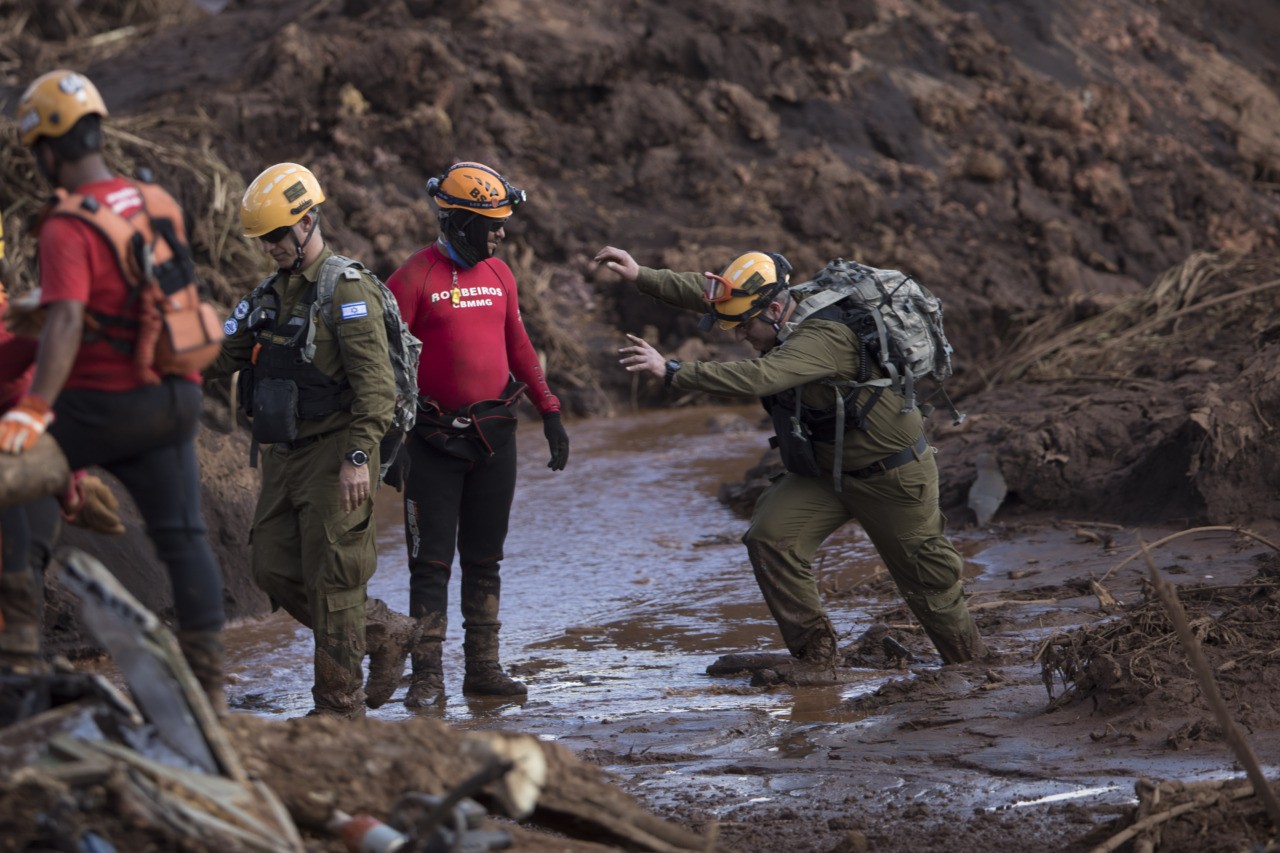 An Israeli rescue specialist, right, arrives at a site where a body was found inside a vehicle stuck in the mud, days after a dam collapse in Brumadinho, Brazil, Monday, Jan. 28, 2019. Firefighters on Monday carefully moved over treacherous mud, sometimes walking, sometimes crawling, in search of survivors or bodies four days after a dam collapse that buried mine buildings and surrounding neighborhoods with iron ore waste. (AP Photo/Leo Correa)

Over the weekend, courts froze about $3 billion from Vale assets for state emergency services and told the company to report on how it would help victims.

According to Vale’s website, the waste is composed mostly of sand and is non-toxic. But a UN report found that the waste from a similar Brazil disaster in 2015 “contained high levels of toxic heavy metals.”

That dam owned by Vale and Australian mining company BHP Billiton collapsed in the city of Mariana in Minas Gerais, killing 19 people and forcing hundreds from their homes.

About 250,000 people were left without drinking water thousands of fish died. An estimated 60 million cubic meters (646 million square feet) of waste flooded nearby rivers and eventually flowed into the Atlantic Ocean.