President Donald Trump brought the midterm campaigns to a close with a final flourish on Monday night in Missouri.

Ever the showman, Trump invited some of the most prominent voices in the conservative movement on stage to urge supporters to vote on Tuesday.

Talk radio legend Rush Limbaugh opened the rally located in his hometown in Cape Girardeau, Missouri, by marveling at Trump’s ability to connect with his supporters.

“The people in Washington really haven’t taken the time to understand why you voted for Trump; they just think you’re stupid for doing so,” he said, adding that he was “honored” to appear at a Trump rally.

Singer Lee Greenwood appeared live to sing “God Bless the USA” as Trump took the stage as the crowd cheered wildly for the president.

“That song is one of the great songs, but when he’s singing it to you direct, we really like that song,” he said.

Trump then invited Sean Hannity on stage, despite doing a pre-rally interview with the president on Fox News, calling him one of the great media figures in America.

“By the way, all those people in the back are fake news,” Hannity said immediately after taking the stage as the crowd cheered. 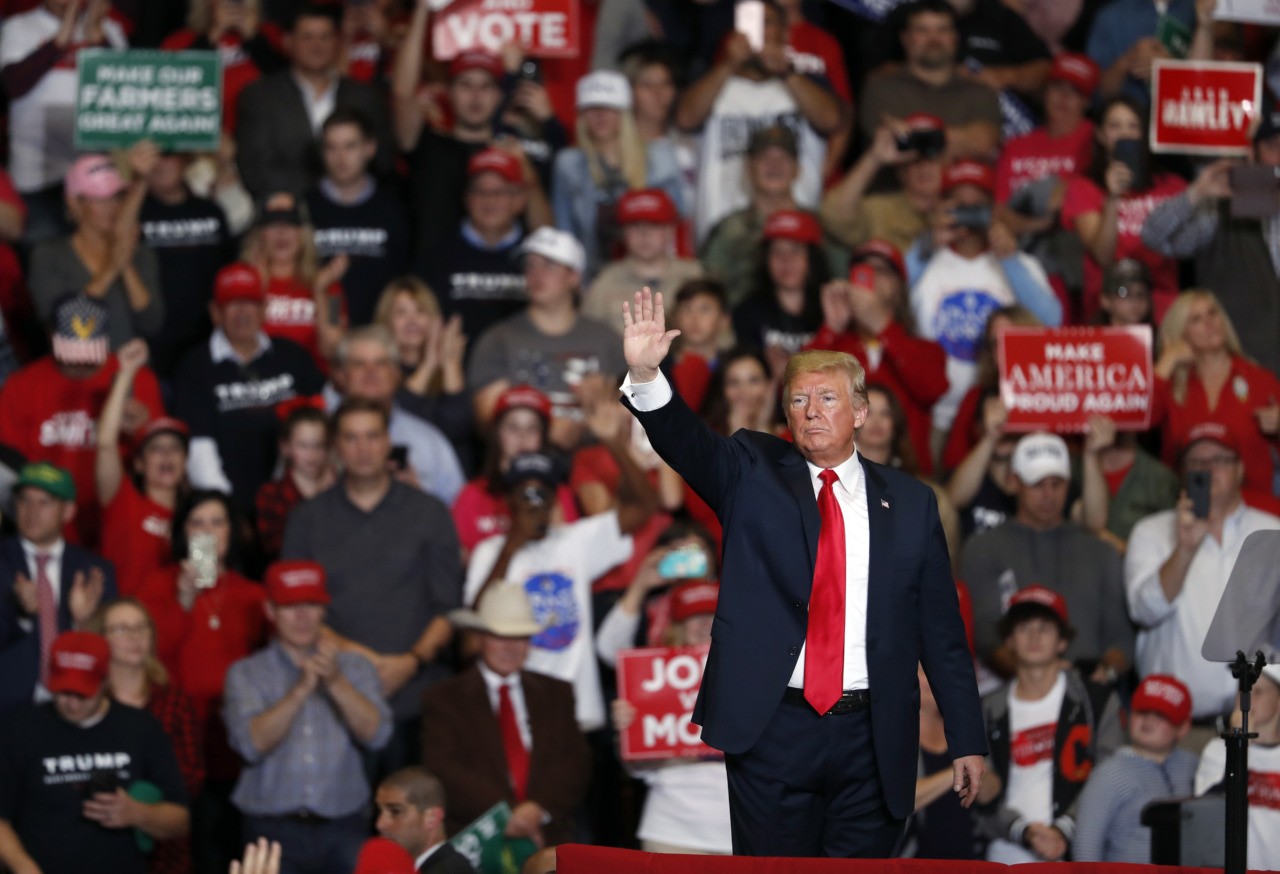 President Donald Trump waves to the crowd as he leaves the stage at the end of a campaign rally Monday, Nov. 5, 2018, in Cape Girardeau, Mo. (AP Photo/Jeff Roberson)

But Trump was not finished. He then surprised the audience by welcoming Fox News host Justice Jeanine Pirro on stage.

Pirro hailed Trump as the “tip of the spear” that fought for his supporters and urged them all to get friends and family to vote in the midterm elections.

“Get them out to vote for Donald Trump and all the people that are running for the Republican party,” she said.

Trump then invited his daughter Ivanka Trump on stage. 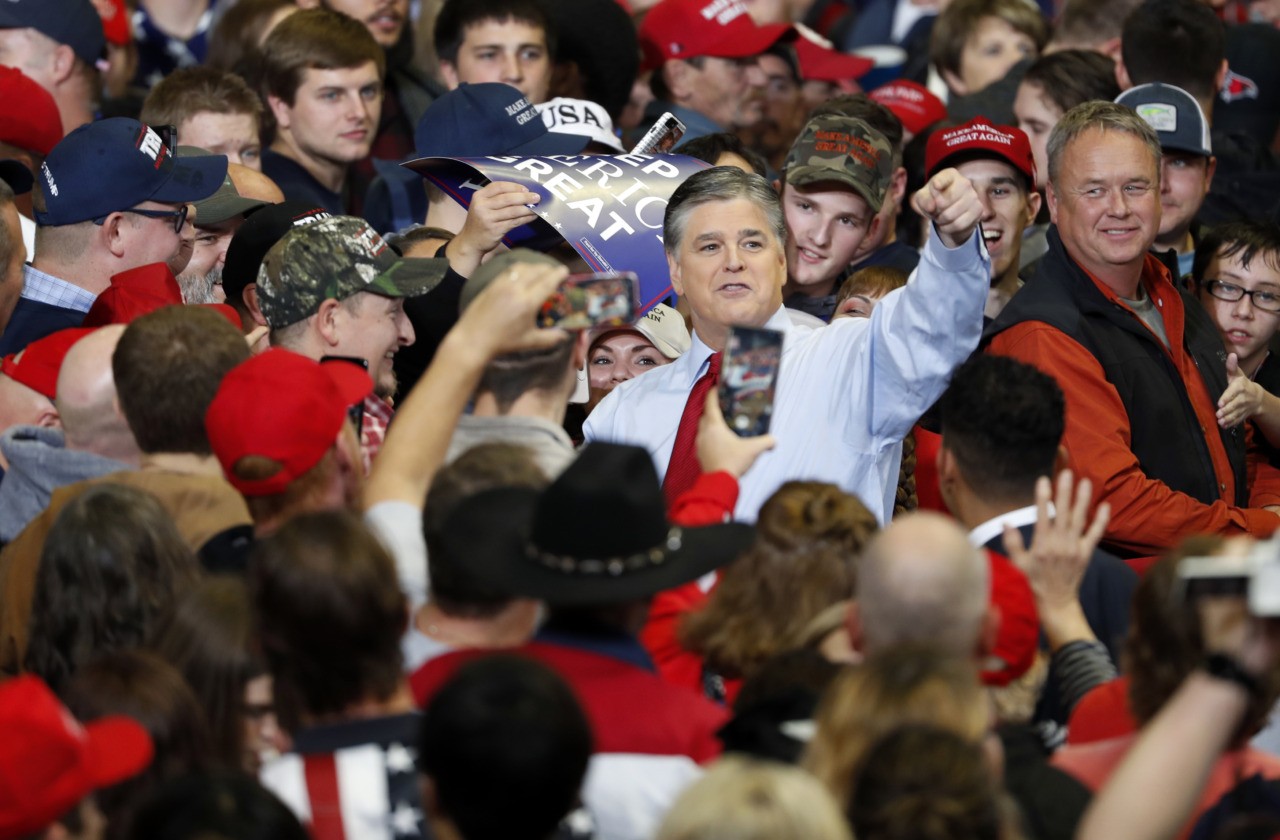 Television personality Sean Hannity points as he meets with members of the audience before the start of a campaign rally Monday, Nov. 5, 2018, in Cape Girardeau, Mo., with President Donald Trump. (AP Photo/Jeff Roberson)

Ivanka Trump told the voters that the entire administration was fighting for all of them – to allow them to achieve the American dream.

“The economy is roaring and tomorrow is ensuring that it stays that way,” she said, referring to the elections on Tuesday.

Trump said that the so-called elites were “not very smart” with “a lot of hatred in their hearts” for his administration.

The president also brought up his White House Press Secretary Sarah Sanders and Counselor to the President Kellyanne Conway as the crowd cheered wildly.

He also invited Republican National Committee chairwoman Ronna McDaniel to the stage, crediting her for working hard to help him win the state of Michigan in 2016.

“The president was in Michigan the night before we won in 2016, he’s in Missouri tonight, you need to deliver a win!” she said. 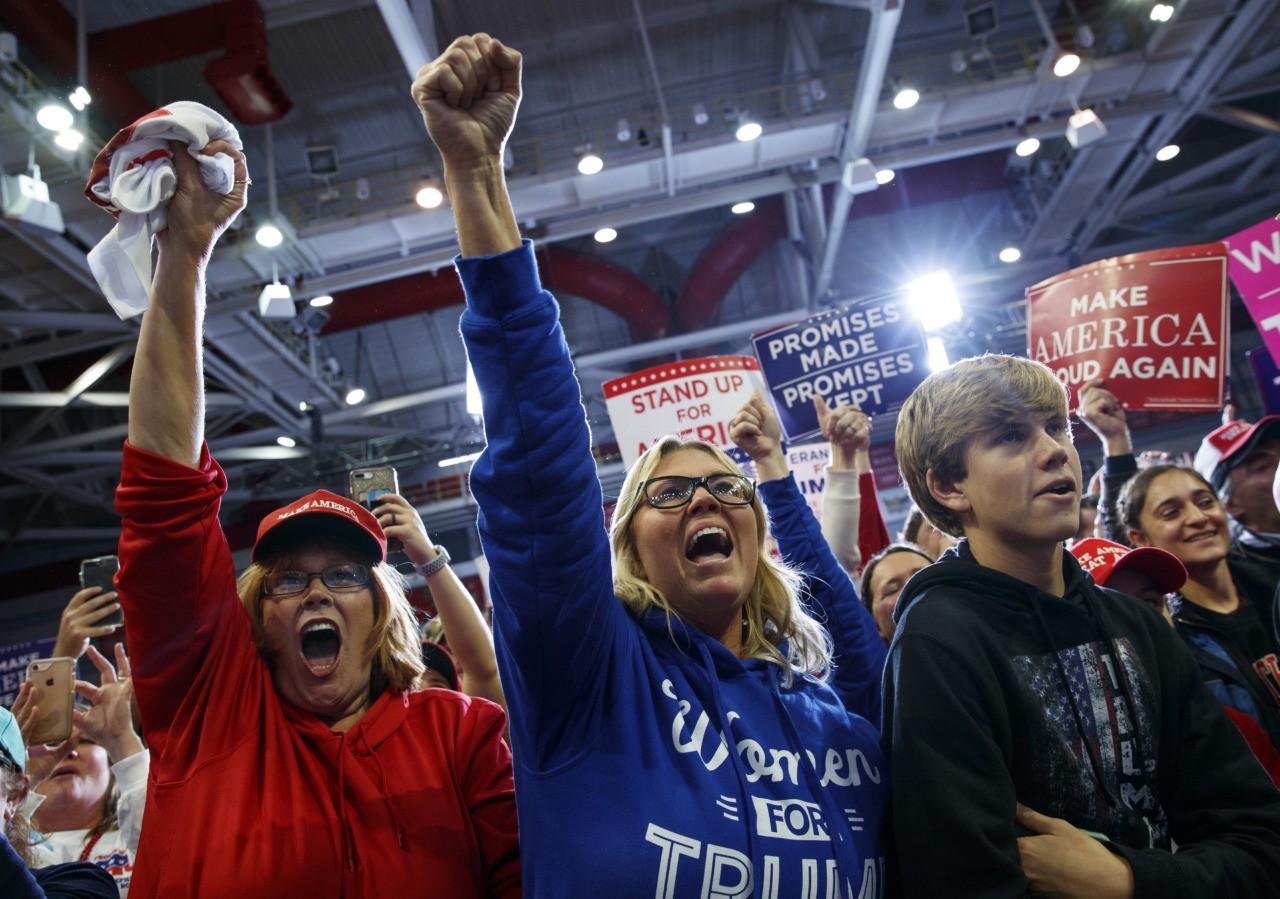 Supporters of President Donald Trump cheer as the president arrives to speak during a rally at Show Me Center, Monday, Nov. 5, 2018, in Cape Girardeau, Mo.. (AP Photo/Carolyn Kaster)

Trump urged all of his supporters to get out and support Republicans to keep the America First movement going.

“Two years ago, we shocked the Washington establishment and stunned the world. The entire world was stunned,” he said. “When we defied the pundits and the critics and rejected the failures of the corrupt status quo and elected a government that finally puts America first.”

The president hosted 43 campaign rallies in 23 different states in 2018, eleven of which took place in the last six days of the campaign.
On Monday, Trump hosted three rallies including Ohio and Indiana.