A selection of paintings allegedly crafted by Adolf Hitler have failed to attract any bids at auction in Germany.

Listed prices of between $21,000 and $50,000 alongside lingering suspicions about the provenance of the artworks were thought to have scared off potential buyers at Saturday’s auction in Nuremberg, the city in which Nazi war criminals were tried in 1945.

The auction house was forced to remove 26 pieces from its brochure over authenticity concerns before Saturday’s auction could begin. 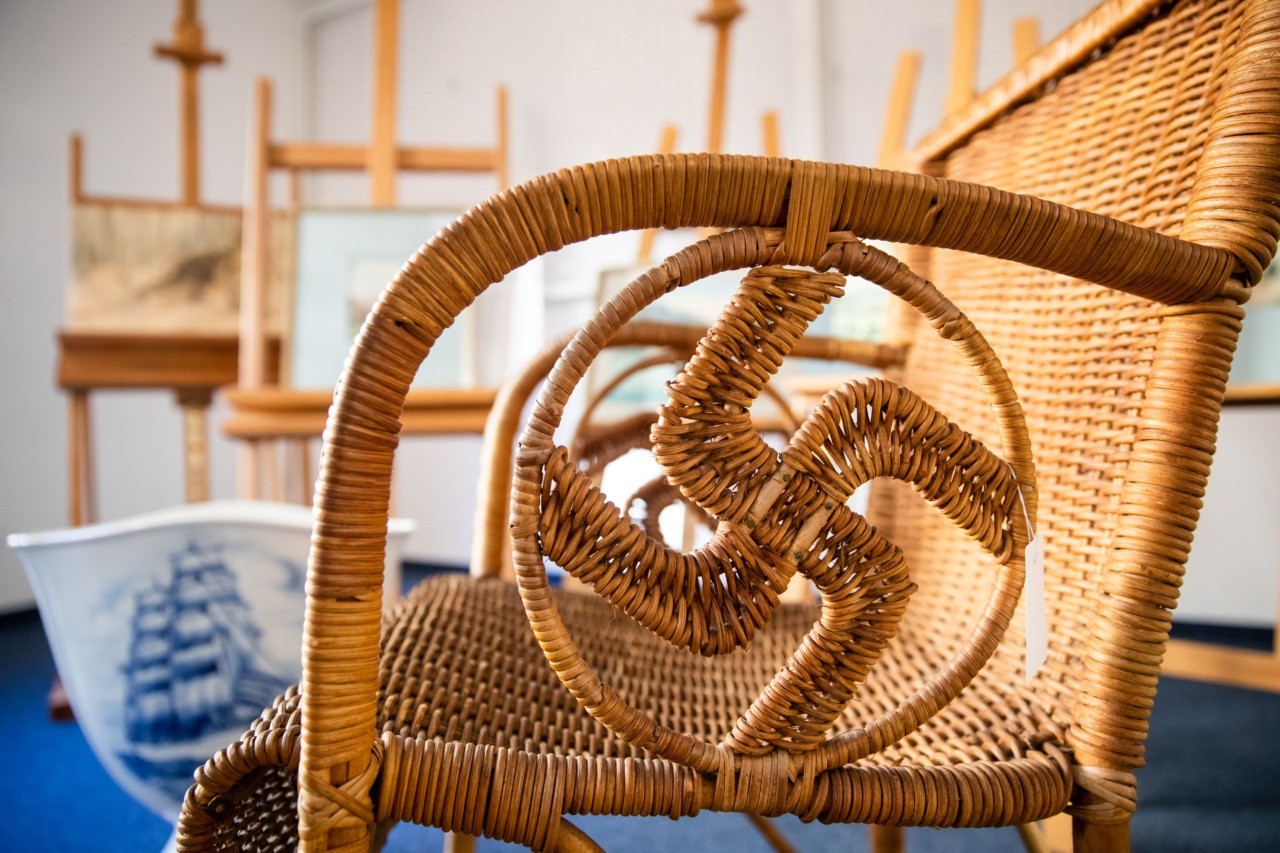 A picture taken on February 8, 2019 at the Weidler auction house in the southern German city of Nuremberg shows a detail of a wicker armchair bearing a swastika which is presumed to have belonged to the late Nazi dictator Adolf Hitler. (DANIEL KARMANN/AFP/Getty Images)

This came shortly after prosecutors confiscated 63 artworks bearing “A.Hitler” or “A.H.” signatures from the Weidler premises on Wednesday.

“Unfortunately, we must inform you that some of the pictures have been dropped because of a review,” the auction house said in a statement sent to German newspaper Spiegel.

Antje Gabriels-Gorsolke, spokeswoman for the Nuremberg-Fuerth prosecution department, told Agence France-Presse that they had opened an investigation into certain individuals “on suspicion falsifying documents and attempted fraud.”

“If they turn out to be fakes, we will then try to determine who knew what in the chain of ownership,” she said. 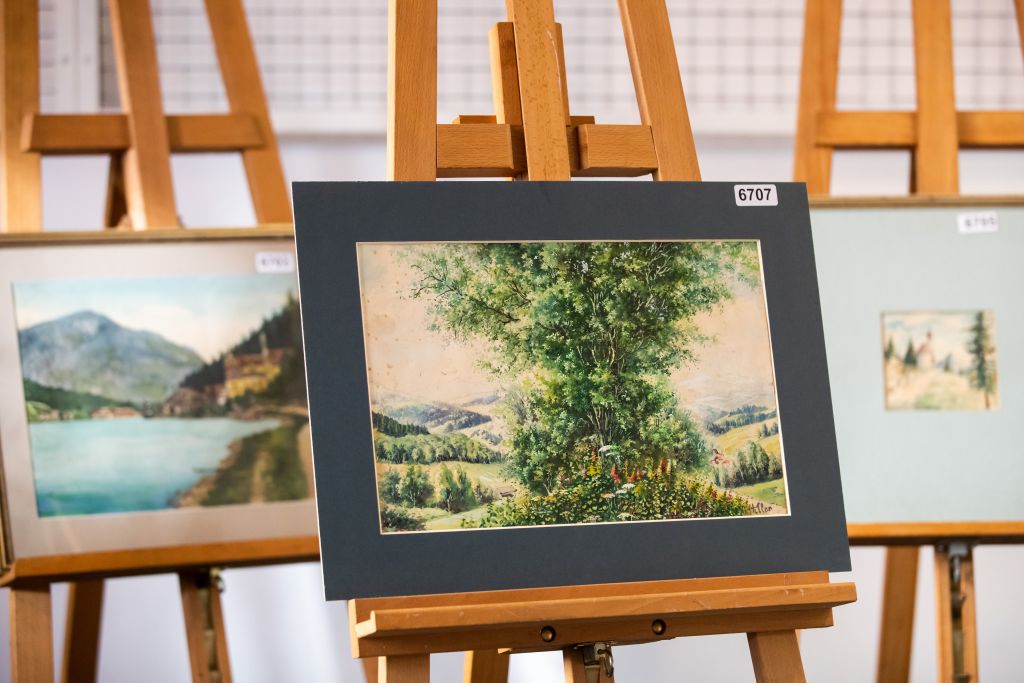 A picture taken on February 8, 2019 shows the watercolour entitled “Buschgruppe” (bush group) signed “A. Hitler”, which is on display at the Weidler auction house in the southern city of Nuremberg. ( DANIEL KARMANN/AFP/Getty Images)

Auktionshaus Weidler handled the auction, which came with catalog notes revealing that “the items come from Austrian or rather European private ownership, originally from famous artists of the Third Reich, their heirs or from the estates of collectors.”

Nuremberg’s mayor, Ulrich Maly, had earlier condemned the sale as being “in bad taste.”

Among the items that failed to sell were a mountain lake view and a painting of a wicker armchair with a swastika symbol presumed to have belonged to the dictator.

The watercolours, drawings and paintings bearing “Hitler” signatures featured views of Vienna or Nuremberg, female nudes and still life works, the auction house said. They were offered by 23 different owners.

This is not the first time that the German Nazi leader’s work has appeared in the public domain.

Sales of alleged artworks by Hitler – who for a time tried to make a living as an artist in his native Austria – regularly spark outrage that collectors are willing to pay high prices for art linked to the country’s Nazi past. 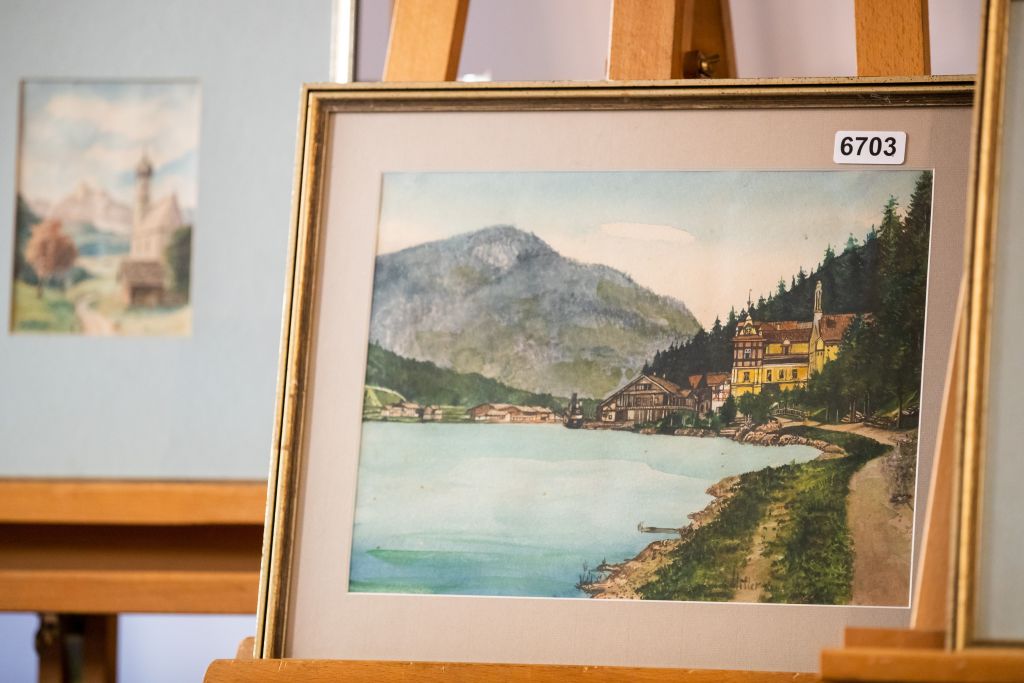 A picture taken on February 8, 2019 shows the watercolour entitled “Ortschaft an Vorgebirgssee”, a scene of a village near a mountain lake, signed “A. Hitler”, which is on display at the Weidler auction house in the southern city of Nuremberg. (DANIEL KARMANN/AFP/Getty Images)

As Breitbart News reported, in 2014, Auktionshaus Weidler sold a watercolor by Hitler for $161,000.

The auctioning of the paintings is “repulsive and sick,” the Guardian newspaper quoted the British art critic Jonathan Jones saying a year later. He asked, “Who are these collectors that fork out considerable sums for the art of a man who caused murder and cruelty beyond imagining?”

That year, 14 paintings and drawings by Hitler fetched a total of more than $443,000 in 2015 with buyers coming from China, France, Brazil, Germany and the United Arab Emirates.