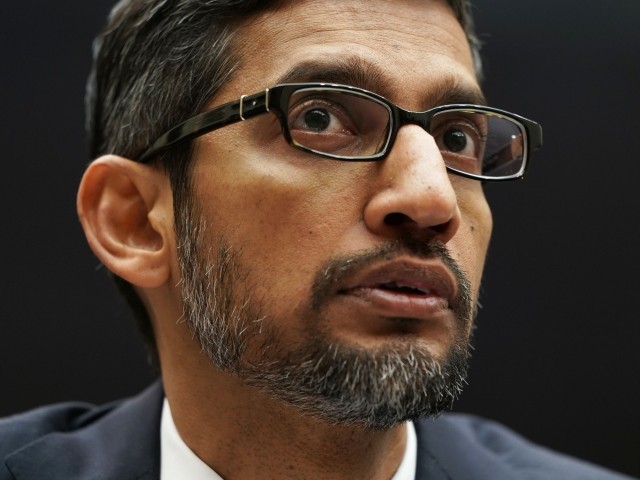 Google CEO Sundar Pichai repeatedly denied that the platforms used features and donations to turn out Latino voters in “key states” in 2016, despite the existence of leaked emails from its head of multicultural marketing claiming the contrary.

Pichai, who was testifying under oath before the House Judiciary Committee, repeatedly told Rep. Jim Jordan (R-OH) that the detailed description of voter turnout efforts in the leaked emails was not correct.

“We pushed to get out the Latino vote with our features in key states.”

“We supported partners like Voto Latino to pay for rides to the polls in key states.”

Pichai says “we are very concerned whenever there are allegations like that –” but Jordan interrupted and directed him to answer the question, whether “we” in both of Murillo’s sentences refers to the company Google.

Extraordinarily – particularly given that he was under oath – the Google CEO denied it.

“As Google we wouldn’t participate in any partisan efforts around any civic process, so I don’t think so.”

The statement is significant for two reasons – firstly because the statement is clearly false. Murillo’s email, which Breitbart News published in full earlier this year, clearly refers to efforts by Google to boost Latino turnout in key states.

Secondly, Pichai concedes that such activities would be a “partisan” activity. So, once it can be shown that Murillo wasn’t lying, Pichai has no way to claim that the get-out-the-vote efforts were non-partisan.

Pressed by Rep. Jordan, the Google CEO continued to deny the words of his own employee.

Pichai: “Congressman, as I said earlier, we found no efforts to substantiate those claims. The only efforts we do around elections -”

Jordan: “So your own head of multicultural marketing, who you praised her work in this email … was lying when she said you were trying to get out the Latino vote in key states?”

Picahi: “We, today, in the U.S., around elections, we make it — and this is what users look to us for — where to register to vote, where to find your nearest polling place, what are the hours they are open, we do those things effectively — “

Jordan: “That’s not what I’m asking. I appreciate that, Mr. Pichai. I’ve already said that’s being a good corporate citizen. What I’m asking is – why did you only do it in key states?”

Pichai: “We didn’t do any such activity as Google in these key states. There are employees, I think they are – ”

Jordan: “Did you push to get out the Latino vote in all states?”

Pichai: “As Google we don’t have goals around pushing out to get any particular segment … we don’t participate in partisan activities. We engage with both campaigns, we support and sponsor debates across both sides of the aisle…”

Jordan: “Your own head of multicultural marketing said you were pushing to get out the Latino vote, paying for rides to the polls for Latino vote, only in key states – you’re saying that’s not accurate?”

Jordan: “So she just made it up out of thin air the day after the election, wrote this email to your key executives, and it’s not true?”

Pichai: “Congressman, I’m happy to follow-up, but I think the employees today do their own activities-”

Jordan: “I don’t want the follow-up, I want the real answers right here in this committee.”

Jordan: “…Did you push to get out the Latino vote and pay for people to go to the polls in California and Texas?”

Pichai: “We as a company didn’t have any effort to push out votes for any particular demographic, that would be against our principles. We participate in the civic process in a non-partisan way.”

Breitbart News will continue to follow this story as it unfolds.