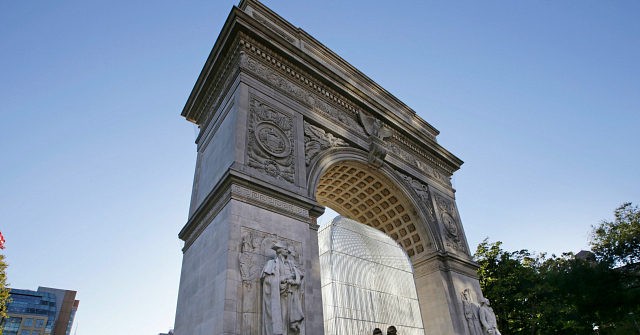 Protesters splashed red paint on the Washington Square Arch last night following the clash with police where marchers were pepper sprayed during the Queer Liberation March nearby. Pics not mine. pic.twitter.com/dTy1XGrIR5

The two suspects — a woman dressed in all white with a white bow in her hair and a man in a black shirt and black shorts — fled on Citi Bikes, law enforcement sources said, noting there was surveillance video of the 3:20 a.m. incident.

The early 20th-century statues — one of Washington as the nation’s first president and another depicting him as general of the country’s Revolutionary War forces — bled red as they dripped with the still-fresh paint just before 8 a.m.

Remnants of the red paint-filled balloons that were tossed at them and the back side of the arch were left at the scene in Greenwich Village in Manhattan.

The city’s Parks Department has since removed from the pair of statues of the country’s first-ever president.

According to officers on the scene, municipal workers have already cleaned the George Washington relief at Washington Square Park. https://t.co/Hb08R085wP pic.twitter.com/RyIdo1eih3

“This does do damage — you can see bits of the statue all over me,’’ one worker said in an interview with the Post.

The incident comes as Black Lives Matter protesters have targeted an array of monuments, including Confederate leaders and even presidents, in the wake of George Floyd’s death. Earlier this month, a statue of George Washington was torn down and draped in a burning American flag by protesters in Portland, Oregon.

The George Washington statue in the Hollywood District of NE Portland is the latest one to be vandalized. The statue and sidewalk have been graffitied. @KGWNews #GeorgeWashington #vandalism pic.twitter.com/RIxe9s2utL

On Friday, four people who allegedly attempted to topple a statue of President Andrew Jackson near the White House were charged with destruction of federal property.

On the same day, President Donald Trump signed an executive order aimed at protecting federal monuments across the country. He has threatened prison terms of up to ten years for offenders.