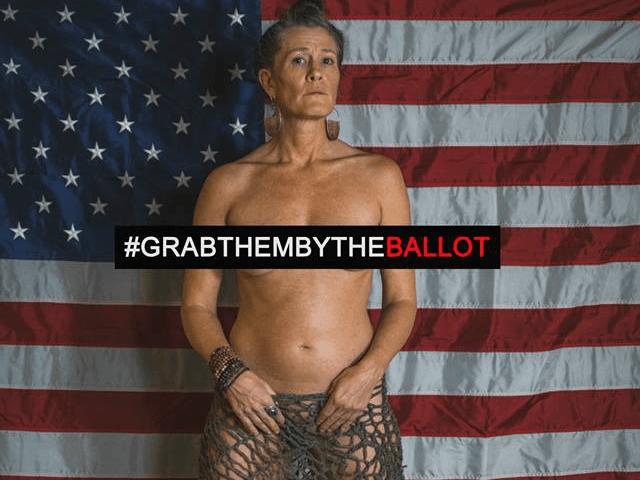 Several Democrat women stripped to their skivvies for a photo shoot that is part of a campaign to urge people to vote against Republicans this election season.

Ten women decided to pose nude with paper ballots covering their private areas in a Vermont studio on October 28 for a photo shoot called “Grab Them by the Ballot,” in the hopes they could convince people to cast their ballots for Democrats instead of Republicans this November.

Dawn Robertson, 48, a Harvard Law School graduate and founder of a recruitment company, told the Daily Mail she organized the photo shoot because of the rise of the #MeToo movement and hoped to push back on what she says is the Republican Party’s attack on women and transgender rights.

“What the Republicans are doing to transgender rights, the way they are attacking women’s reproductive rights and the collective trauma means that women are really coming to the forefront now,” she said.

Robertson said she was inspired by a photographer’s 2016 photo shoot called “Grab Him by the Ballot,” which was a reaction to the 2016 election when Donald Trump won the presidency.

“The difference is we are saying it’s not just Trump, it’s Kavanaugh and all the alleged abusers who have been exposed by the Me Too movement,” Robertson said.

The activist, who also writes about sexuality, decided to cherry-pick a handful of models, making sure the shoot represented those from minority backgrounds.

Some of the female models she chose were a Hispanic woman, a pregnant woman, and a transgender person who identifies as a woman.

Robertson said she recruited her models via social media and in person at a local grocery store.

“I pounded the pavement the night before the shoot because a woman had canceled,” she said.

Robertson said the end goal of her campaign was to get women and marginalized groups to vote.

“I hope that the pictures encourage women and marginalized communities to vote. I want them to know that their voice matters and this is serious s***,” she said.

But the campaign went viral in an unexpected way when several women flooded the Grab Them by the Ballot Facebook page with negative reviews on Thursday, with many calling Robertson’s campaign “cringeworthy.”

“This is so cringeworthy. I’m disappointed and disgusted by these women who are not only rude and mean if you don’t conform to their beliefs but also get mad at you just by asking questions. This campaign is a joke,” one woman wrote, giving a one-star review to the page.

“What a disgrace. This is not a campaign. This is a bunch of victims wanting attention for being victims,” another woman remarked in her one-star review of the Facebook page. “This right here is what gives women a bad name. Your campaign and your stupid actions are what makes people not want to take women seriously!”

“If I could give zero stars I would. Honestly, being a bully and looking down on others just because they don’t share the same political views as you, is what is ruining this country,” a third woman remarked, adding that the “morally disgusting and hypocritical” campaign does not “match the actual definition of feminism.”