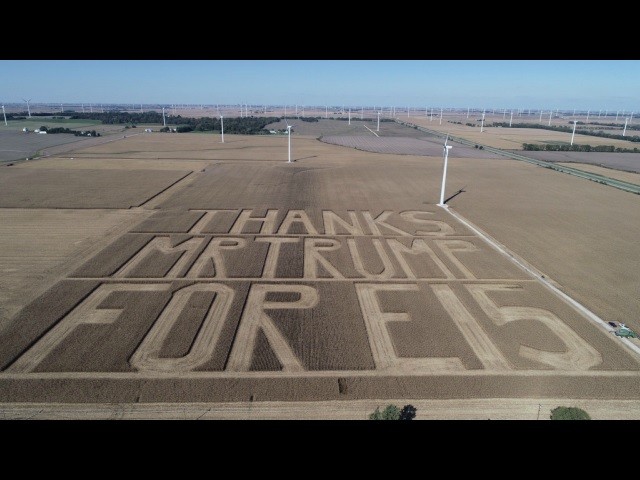 A group of Indiana farmers cut a 60-acre “thank you” message out of their crops to praise President Trump’s recent decision to allow year-round sales of corn-based E15 gasoline.

Bruce Buchanan, who farms 6,000 acres along with his son Allen for Buchanan Family Farms in Fowler, Indiana, told Fox & Friends Sunday he wanted to express his thanks to the president for the decision to expand E15 sales using a gigantic corn maze.

Buchanan carved the message out of 60 acres of corn on Tuesday and Wednesday, which read, “Thanks Mr. Trump For E15.”

“We literally mechanically harvested the corn as we proceeded to spell out the letters in the maze,” Buchanan said.

Photo Is from Bruce Buchanan of Buchanan Farms in Fowler, Indiana. pic.twitter.com/nc0Wmszm8s

Trump announced his decision to allow year-round E15 sales at a rally in Council Bluffs, Iowa, on October 9, lifting a ban on summer sales of the corn-based fuel.

“We know for a fact that, for the ag economy, income is down and prices are down. What this is going to do for that, we don’t know, and you don’t know, for sure. But we felt it was a pretty impactful thing for our president to do,” Buchanan told the Lafayette Journal & Courier.