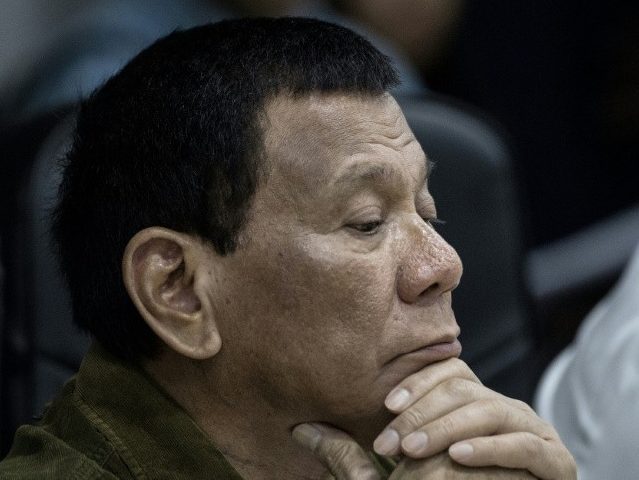 President Rodrigo Duterte of the Philippines, who has adopted as his signature policy a violent nationwide crackdown on drug use, claimed in remarks on Monday that he uses marijuana “to stay awake.”

Duterte later told reporters he was “of course” joking, trying to keep a rambling speech about how much he disliked the experience of attending this year’s Association of Southeast Asian Nations (ASEAN) summit from getting too boring.

Duterte was speaking at an event celebrating the Philippine Organizing Committee that put together the country’s delegation to ASEAN. The Philippine president typically deviates from the main themes of events he attends in his remarks, instead taking time to discuss matters of interest to him, such as his distaste for the Catholic Church. Last week, he threatened to “decapitate” a Philippine bishop for allegedly buying drugs, a claim Duterte did not back with evidence.

At the ASEAN event in Manila Monday, Duterte took the time to detail his many complaints about the conference, calling it a “killing activity,” implying that the world leaders who attend spend most of their time there slowly dying inside.

“Me, not so much,” he added, “because I take marijuana to stay awake. It doesn’t work, with others.”

Duterte used Sultan of Brunei Hassanal Bolkiah as an example of one of the world leaders who fell asleep during the event.

“Just between us, but Bolkiah slept during the events,” Duterte said during the public speech at the presidential palace Monday. “He has a talent to make it appear that he was not sleeping, so it is as if he is contemplating his oil.”

Duterte also complained about the “awful” food at the event, claiming he had to bring his own canned meats and eat them in his hotel room to avoid consuming catered ASEAN food for heads of state.

“The food sucked. Jesus, Mary, and Joseph, it’s true,” Duterte protested. “I have to bring Karne Norte and dried fish.”

He went on to complain that the heads of the ASEAN “think we’re boy scouts” and overbook each world leader’s schedules. “I can’t take it,” he added.

The ASEAN conference occurred last month in Papua New Guinea. At the time, Duterte skipped several significant meetings at ASEAN and went on to skip four meetings scheduled at the Asia-Pacific Economic Cooperation (APEC) conference in Singapore, which occurred immediately after the ASEAN summit. He also skipped the ASEAN gala, which he hosted in 2017 when the Philippines organized it. Duterte’s presidential spokesman, Salvador Panelo, told reporters that Duterte skipped the meetings for “power naps” necessary due to the “punishing” schedule he faced.

Duterte’s remarks about marijuana have triggered the most outrage, as police have killed thousands of Philippine nationals in shootouts since Duterte took office in 2016, vowing to kill the nation’s drug criminals and eradicate illicit drug use entirely. Marijuana use is illegal in the Philippines. An estimated 5,000 people have died since Duterte took office in incidents related to law enforcement against drug crime. The first police convictions for wrongful killing of drug suspects occurred on Friday; Duterte has vowed to pardon officers who kill Philippine citizens suspected of using or trafficking in drugs.

Asked to clarify his remarks Monday, Duterte said, “Of course I was joking. … I want to shake a tree in the middle of a [speech].” He added that his speech “would be boring” if he did not make jokes and that this was part of his “style.”

“It’s too late to change,” he concluded, adding, “If you believe it, you are stupid.”

In an interview in 2016, Duterte issued support for legalizing medical marijuana, insisting that cannabis “is really an ingredient of modern medicine now. … There are medicines right now being developed or already in the market that contains marijuana as a component but used for medical purposes.” Yet he rejected the idea of smoking cannabis recreationally, warning that those who “fight” the law by using it in the manner will “die.”

Rappler added that Duterte has previously admitted, without claiming to be joking, to the use of fentanyl, an extremely addictive and dangerous opioid believed to have played a role in nearly half the opioid overdose deaths in the United States in 2017. Duterte claimed to use fentanyl in a patch form to relieve chronic back pain.