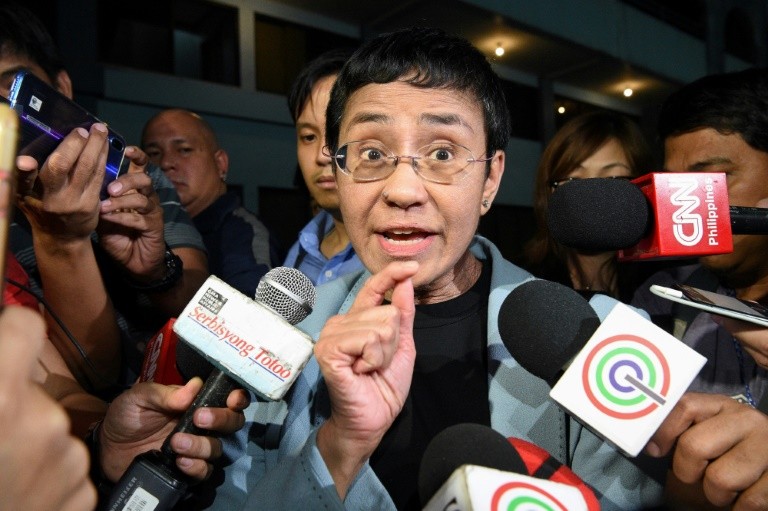 Police in the Philippines arrested Maria Ressa, the CEO of the major online publication Rappler, and former Rappler reporter Reynaldo Santos, Jr., on Wednesday on charges of “cyber libel” for an article quoting a government intelligence report accusing a wealthy businessman of having ties to drug trafficking.

Ressa became a target for the Philippine government under President Rodrigo Duterte early during his presidential tenure, which began in 2016, for Rappler’s critical coverage of his war on drugs and repeated calls for police to kill drug suspects without due process. In 2018, Time magazine named Ressa, along with several other journalists, its Persons of the Year for challenging strongmen governments.

Rappler’s own coverage of Ressa’s arrest notes that she was arrested on Wednesday evening by members of federal law enforcement from the National Bureau of Investigation (NBI), who entered the publication’s offices in plain clothes to execute an arrest warrant issued Tuesday. The court handling the case denied Ressa bail. In addition to the “cyber libel” case, Ressa and Rappler are facing five charges of tax violations and posted bail twice on those charges in December. As she remained in the Philippines following the bail, she has proven not to be a flight risk, leaving unclear why the judge presiding over her case refused her bail on this occasion.

The article triggering the arrest was published in 2012. It claimed that Wilfredo Keng, described in the article as “a Filipino-Chinese businessman dubbed by Forbes Magazine as one of the richest Filipinos in 2010,” lent his SUV to then-Chief Justice Renato Corona, a significant ethics violations. The article cited a Philippine intelligence report independent of the SUV case that tied Keng to drug trafficking – an accusation that could lead to death in Duterte’s Philippines. Rappler reported in 2017, before the criminal charges:

The report stated that Keng had been under surveillance by the National Security Council for alleged involvement in illegal activities, namely “human trafficking and drug smuggling.” He is supposedly close to lawmakers and had contacts with the US embassy at the time.

The offending article appeared in Rappler in May 2012. The “cyber libel” law that the article allegedly violates was passed in September 2012 and has no retroactive provisions. Keng did not object to the article until 2017, after Duterte’s government began accusing Rappler of running fake news and being illegally run by foreigners (the Philippines requires all national media to be owned and operated by Philippine nationals).

Ressa rose to international prominence in December 2018, appearing on an alternative cover of Time‘s Person of the Year edition. Late Islamist advocate Jamal Khashoggi, killed in the Saudi embassy in Istanbul late last year, appeared on the standard cover. Duterte’s government responded to the accolade by insisting that press freedom in the country remained “robust” and that Duterte “cannot intrude into that.”

Ressa and her publication continued to cover Philippine politics, however, often shining light of incidents of shooting deaths involving individuals, many of them politicians, accused of ties to the drug trade. As a result, the international community of journalists has responded to her arrest with outrage.

“The Philippine government’s legal harassment of Rappler and Maria Ressa has now reached a critical and alarming juncture,” Shawn Crispin, senior Southeast Asia representative of the Committee to Protect Journalists, said in a statement. “We call on Filipino authorities to immediately release Ressa, drop this spurious cyber libel charge, and cease and desist this campaign of intimidation aimed at silencing Rappler.”

“The arrest of … Ressa on the clearly manipulated charge of cyber libel is a shameless act of persecution by a bully government,” a statement by the National Union of Journalists’ of the Philippines read.

The typically outspoken Duterte has yet to issue any public comment on the Rappler situation at press time. Rappler continued to publish on Wednesday, including covering Ressa’s arrest, and the offending articles appear to still be available on the website.