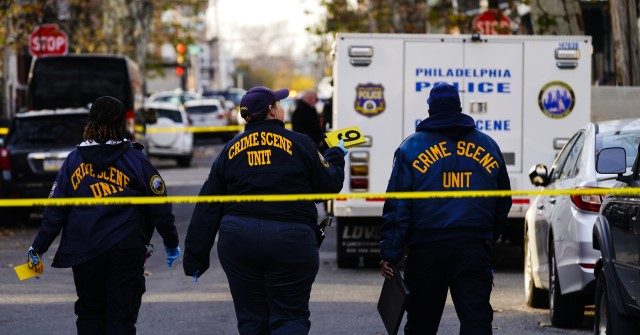 Philadelphia police have arrested a 29-year-old man who they say stabbed six of his family members while they slept early Friday morning.

Police were called to the 3000 block of North Front Street in the Kensington neighborhood of Philadelphia just after 4:00 a.m., where they found the six victims aged between 26-57, according to WPVI. Neither the suspect’s identity nor the victims’ identities have been released.

The victims were transported to Temple Hospital, the outlet reports.

BREAKING: 6 family members all stabbed in their sleep. @PhillyPolice say victims are 26 to 46 year old mother who is critical slashes in neck. Arrest made 29 year old bloody relative found walking away 3 blocks away near Front Street near Allegheny Ave @FOX29philly pic.twitter.com/rtK94ofmR6

The other victims were in stable condition.

Multiple young children were present at the home, but none were injured, authorities said, per WTFX.

Small explained that the victims were stabbed in three bedrooms on the home’s second floor. He noted blood was present on walls, doors, and the floor, and one of the bedroom doors was knocked from its hinges. Police say the suspect, who lives at the home, went from bedroom to bedroom stabbing the victims, one of whom is special needs.

“One of the knives, that’s all metal, is broken, which goes to show how violently these individuals were being stabbed,” Small told WPVI.

The victims provided police with a description of the suspect, and a person fitting the description was located three blocks away from the residence.

“This person was also covered with blood. His face, his clothing and he actually had some cuts to the inside of hands, which is common when you stab somebody,” Small said.

The man was apprehended and taken to a hospital for treatment of his hand wounds, WPVI reports. Family members positively identified the suspect, Small said.

A motive has yet to be determined.