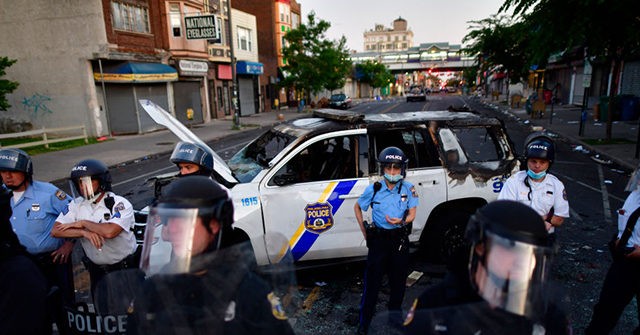 Several Philadelphia police officers suffered injuries, including chemical burns to the face, as a result of the violent protests that rocked the city over the weekend.

Protests in Philadelphia took an unruly turn over the weekend as rioters clashed with officers and turned on local businesses. Over 200 demonstrators were arrested while officers tried to maintain peace as rioters engaged in criminal behavior, setting vehicles ablaze and looting businesses.

Philly Police Commissioner Danielle Outlaw indicated over the weekend that several police officers were injured as a result of the violent demonstrations, suffering chemical burns to the face, among other injuries.

In a news conference, Philly Police Commissioner Danielle Outlaw confirmed that stores were being looted and at least 13 police officers were injured during the day. Seven suffered chemical burns to their faces, two had head injuries, and four had hurt limbs.

A Philly bike patrol officer was also injured after trying to stop a group of people in a vehicle from looting a businesses. The driver ran over the officer while trying to get away. The injured officer is in stable condition, suffering a broken arm:

Mayhem continued to unravel in the streets of Philadelphia on Sunday evening as demonstrators destroyed a line of police vehicles as officers moved to defend local businesses — many of which are minority-owned — from vandals and looters:

POLICE CARS DESTROYED: Rioters destroy a line of police cars, ghost riding them into each other and setting them on fire in West Philadelphia.