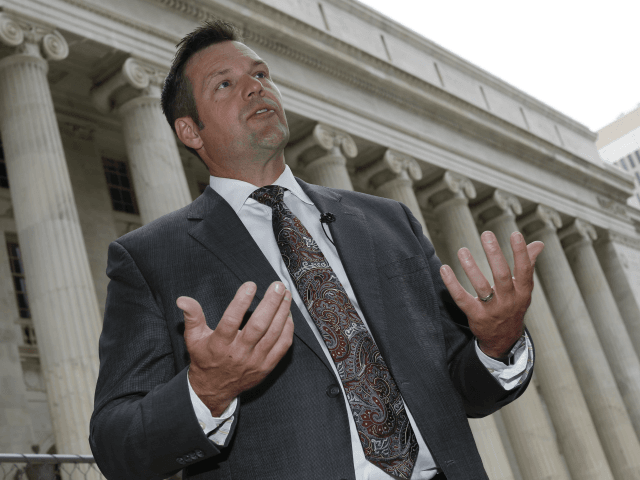 Trump is rumored to be replacing Nielsen by the new year, as he and allies of his “America First” have continuously expressed disappointment and rage at her leadership of DHS over the last year, sources have said.

For her replacement, NumbersUSA — an organization that represents the interests of American workers in the immigration debate — is urging supporters and activists to sign a White House petition that asks Trump to replace Nielsen with Kobach.

The petition, which can be found here, states:

No one is more qualified to address the ongoing border crisis and to carry out the Trump Administration’s immigration agenda than Kansas Secretary of State Kris Kobach. [Emphasis added]

Kobach later gained national prominence when he crafted a number of state and local immigration enforcement bills that went on to become law and defended those laws before the Supreme Court. [Emphasis added]

DHS has a wide range of responsibilities, but immigration remains a top issue for Pres. Trump, which is why he should nominate Kris Kobach as the next DHS Secretary. [Emphasis added]

Kobach has dedicated much of his career to combatting illegal immigration, being one of only a handful of elected Republicans who recognize the downward wage pressure on U.S. workers created by the annual importation of more than 1.5 million mostly low-skilled immigrants.

In some of his most recent Breitbart News columns, Kobach has advocated for stopping mass illegal immigration at the southern border and a migrant caravan of 7,000 to 10,000 Central Americans by enlisting state and local police to aid federal immigration officials.

“It’s an instant force multiplier to protect our nation’s borders,” Kobach writes of the plan.

Kobach previously advised Trump on immigration issues during the administration’s transition period, helping to lay out the plan for a border wall along the U.S.-Mexico border ahead of the president’s historic victory.