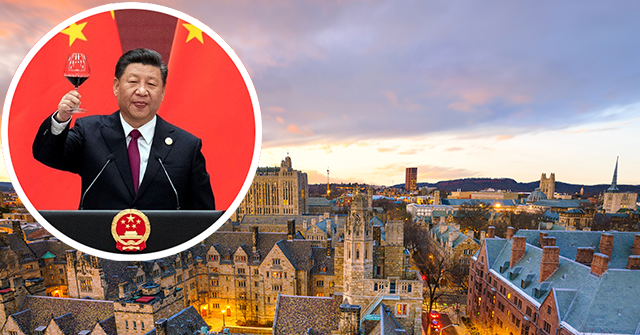 Bestselling investigative author Peter Schweizer says that U.S. colleges and universities are not complying with federal laws with regards to reporting the millions of dollars they receive in donations linked to the Chinese Communist Party. Schweizer details these findings in his latest book, Red-Handed: How American Elites Get Rich Helping China Win.

“Section 117 of the Education Act in 1965 is very explicit. It says that if U.S. colleges and universities take in foreign donations, substantial foreign donations, they are required to report those to the federal government,” Schweizer told the Star News Network.

“This is particularly applicable to China today, because hundreds of millions of dollars are flowing to American colleges and universities from Chinese nationals, many of them linked to the Chinese Communist Party, and to the Chinese state,” the Red-Handed author added.

Investigative journalist @PeterSchweizer sat down with @NeilWMcCabe2 to discuss the connections between American institutions of higher learning, like Yale, and China. pic.twitter.com/y5U2VUm0dU

Many U.S. colleges, however, have not reported any or all of their Chinese cash — such as Yale University and the millions of dollars it received from Joseph Tsai, co-founder of Alibaba and owner of the Brooklyn Nets — Schweizer said.

“The problem is that a lot of these donations to colleges and universities come with strings attached, and those strings attached can be subtle, but they’re direct and real, and I think it’s having a major effect on the conversation on China that’s taking place today on college campuses,” he said.

Schweizer added that the University of Pennsylvania is one of the worst offenders when it comes to unreported funds from the communist regime.

As Breitbart News previously reported, Chinese donations to UPenn soared after it announced the “Biden Center.”

“In the three years before the announcement, the university received around $15 million. In the three years after, the total was close to $40 million. The latter number is $60 million from China if you include contracts,” Schweizer writes.

Some of those donors were anonymous, but declared donors included the state-owned China Merchants Bank, and a company called Cathay Fortune owned by “a secretive Chinese billionaire who appears to have strong links with the Communist Party” named Yu Yong.

Moreover, action from the Biden administration is unlikely, as President Joe Biden recently made the president of the University of Pennsylvania, Amy Gutmann, his ambassador to Germany.

Schweizer’s Red-Handed: How American Elites Get Rich Helping China Win hit number one on the New York Times bestseller list, one week after its release by HarperCollins. Red-Handed follows his 2020 book Profiles in Corruption and 2019’s Secret Empires.