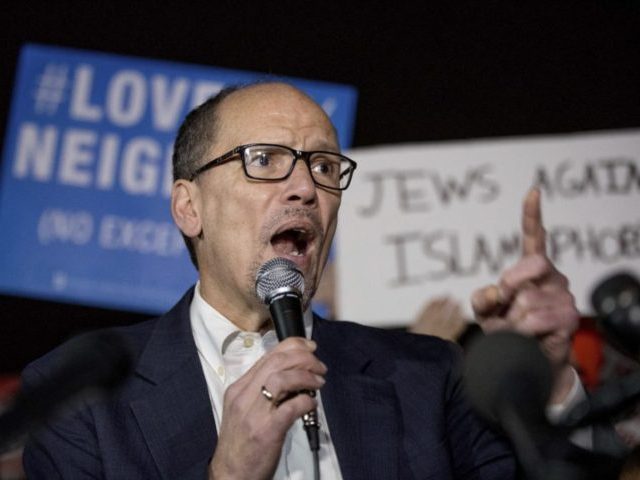 On Tuesday’s broadcast of CNN’s “OutFront,” DNC Chairman Tom Perez stated President Trump is using the migrant caravan as a distraction. He also discussed the Democratic Party’s message on the issue, saying that “We are a nation of laws and the laws that are on the books deal with issues of refugee and asylum status…and our laws require that people be treated with dignity and given that process.”

Host Jake Tapper asked Perez what is the Democratic Party’s message on the caravan.

Perez said, “Well, let’s talk about the facts first, Jake. As a result of policies that President Obama put in — and let’s deal with the facts, border crossings in fiscal year 2017, which started in 2016, when Barack Obama was in office, were at the lowest level since the 1970s. That was the trend data. That is what is happening on the ground. Caravans are not new. They have been happening for a number of years, and they are happening because the conditions in these countries are horrific. This is not something new. But Donald Trump is talking about this because he wants to distract voters from the fact that they want to cut Medicare, they want to cut Social Security, they want to cut Medicaid, and they want to make sure that if you have a pre-existing condition, you’re going to be out of luck.”

After Tapper pressed Perez on the Democrats’ message, Perez responded, “We are a nation of laws and the laws that are on the books deal with issues of refugee and asylum status, and those are the laws that have always applied. … It’s a humanitarian issue of significance, and our laws require that people be treated with dignity and given that process. But Donald Trump isn’t bringing this up for any reason other than to distract people. It’s his closing argument. When he’s in the biggest trouble, the biggest dog whistle he blows is the immigration dog whistle.”