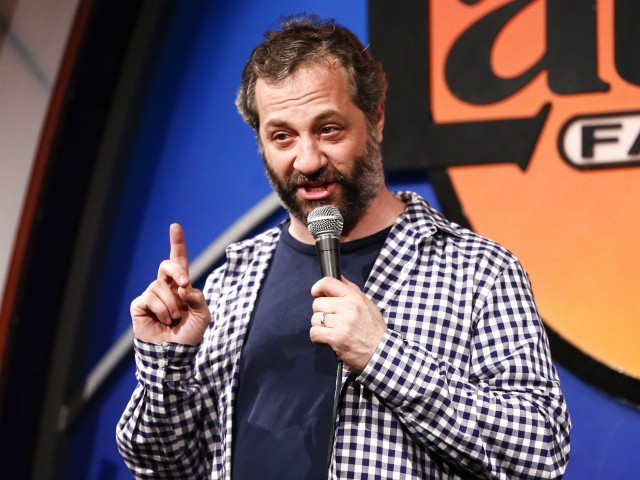 Penthouse Magazine published a 15-minute video on their new website Thursday that targeted Hollywood director Judd Apatow, using his own past of politically incorrect jokes against the left-wing director.

The article, written by Mandy Stadtmiller, accompanies a video that shows numerous examples of Judd Apatow himself, or in movies he’s written, directed, or produced, ripping on LGBT people, making incest jokes, mocking consent, and more.

“In this video, I have used the long-heralded journalistic ‘gotcha’ technique of spending hundreds of hours looking through Apatow’s work in order to find some footage that portrays his hypocrisy in positioning himself as a moral arbiter of the comedy world,” Stadtmiller writes.

“Everyone should be aware of this technique. No one should trust journalists. And I say that as one,” she continues. “To that end, I have spent the last few weeks doing what all tabloid-bred shit-heels do, which is dig through the corners of the internet, researching Judd Apatow: the man, the myth, the hypocrite.”

The writer takes issue with Apatow’s complete 180 and, as she puts it, his “historical revisionism” when attacking others despite his own history of anti-PC jokes.

To calmly attempt to transition from the man who made his millions off of faggot-and-tranny jokes in his always wildly sexist (in a hilarious way—sorry, guys, but sexism is hilarious, as is misandry) movies to his recent reinvention as Mr. Woke Stasi, El Capitan, is pretty badass. It actually reminds me of one of my favorite scenes from the brilliant, groundbreaking FX show Louie (have you ever seen it? Well, sorry fuckos, it’s gone forever now!) where Louie (Louis C.K.) has a shot at replacing Letterman. As he’s fully flop-sweating it out for the guy who’s auditioning him, Louie goes to a deep, deep place of desperation and fart-poop-fuck-boobies juvenilia to get the job. Because he’s fucking terrified. And it is so goddamned authentic that it makes your heart sing, and you feel like you’re not the only one who’s been both so low and so high at the same time. That maybe you’ll recover.

I don’t really think Judd Apatow should be “cancel culture”-d by any means, but I’ll tell you one thing. By Apatow’s standards, he surely does.

Indeed, Apatow now positions himself as a solidly left-wing force of social justice in Hollywood. But his movies and comedy style have been, by today’s social justice standards, “problematic.”

As the Penthouse video documents in part, movies like The 40-Year-Old Virgin, Superbad, and Step Brothers were full of bro-humor and graphic sexuality.

More recently, the 51-year-old director has been blending in better with his Hollywood peers, promoting ad boycotts against conservatives and calling President Donald Trump a “Nazi.”

At the time of publishing, Apatow had not responded to the Penthouse report.