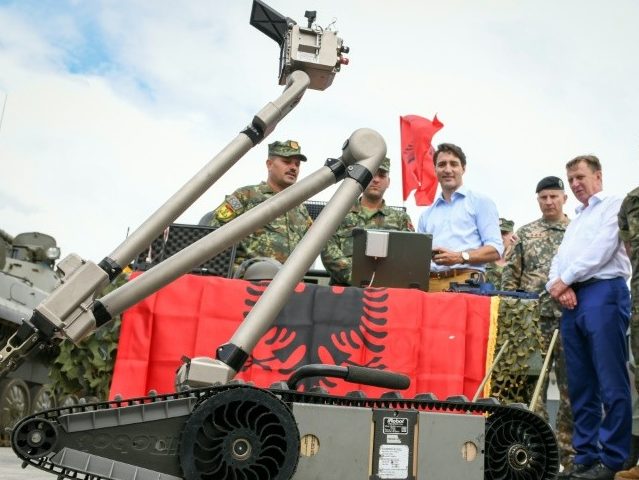 WASHINGTON, DC — The United States is at risk of losing its technological edge in the key war-fighting domain of artificial intelligence (AI) to adversary China, top Pentagon officials cautioned lawmakers on Tuesday.

U.S. military and independent experts have acknowledged that China and, to a lesser extent, Russia are investing heavily in AI, prompting concerns of a race to militarize artificial intelligence.

The Pentagon has recognized that AI can be used to enhance military power.

This year, an expert from the Center for Strategic and International Studies (CSIS) warned lawmakers that China had developed a plan to “overtake” America’s dominance in militarizing artificial intelligence, robotics, and quantum computing, noting that the communist nation is “rapidly closing the gap” with America.

Lt. Gen. VeraLinn “Dash” Jamieson, the deputy chief of staff for intelligence, surveillance, and reconnaissance on the Air Staff at the Pentagon, warned in late July that China is leaving the United States behind on AI advances.

During a hearing Tuesday by the House Armed Services Subcommittee on Emerging Threats and Capabilities, Rep. Elise Stefanik (R-NY), the panel’s chairwoman, asked Pentagon officials if the United States is falling behind China when it comes to the “AI arms race.”

Dr. Lisa Porter, the deputy undersecretary of defense for research and engineering, responded by saying the United Staes is actually “ahead,” but cautioned that America is “in danger” of losing its edge.

“I would say we are not behind, right now we’re actually ahead. However, we are in danger of losing that leadership position. …If you look in terms of our talent particularly in our academic base, the United States along with our partners in the U.K. and Canada, in particular, are seen even by the Chinese as having quite a lead,” Porter testified.

Porter attributed America’s AI superiority to its investments in the field over the last decades.

The U.S. government “has been funding this field for decades so we have built an extremely robust and deep bench in the disciplines that are required to advance this field,” she declared, adding, “We [also] have this vibrant private sector that is able to turn around and take that research and rapidly converted to commercial products and create new markets.”

We have a lot going for us, and I believe China has unfortunately or fortunately if you’re from China I guess, they have figured out that that’s one of the key ingredients to our success that we have a multi-tiered approach in this country to ensuring that we continue to stay in the cutting edge ,we invest heavily in academia, and we invest heavily in our labs. … They recognize that and that’s why you’re seeing tremendous increases in their investments, particularly in academic as well as the start-up community.

Echoing Porter in his written testimony, Dana Deasy, the chief information officer at the Pentagon, noted that investments in AI by Russia and China are “eroding” America’s advantage in the field.

Other nations, particularly China and Russia, are making significant investments in AI for military purposes. These investments threaten to erode our technological and operational advantages and destabilize the free and open international order. The Department of Defense, together with our allies and partners, must adopt AI to maintain its strategic position, prevail on future battlefields, and safeguard this order.

Porter conceded that there are limitations to AI, saying the system is “hard to trust.”

Despite all of the successful examples of current machine learning systems, they are narrow in what they can do, they are brittle, and they cannot explain what they do – which makes them hard to trust. Furthermore, current systems require robust processing power. And finally, current systems are susceptible to various forms of spoofing, known as “adversarial AI.” We are working to address these challenges and vulnerabilities – metric selection, data curation, trust, processing power, and adversarial AI – through multiple efforts.

Deasy noted that the Pentagon is actively integrating AI into its operations:

Under the NDS [2018 National Defense Strategy], the Department will accelerate the adoption of AI to expand our military advantages and create a force fit for our time. AI will enhance operational effectiveness, improve readiness, and increase efficiency in the general business practices of the Department. … This AI transformation will ensure that we maintain the ability to execute the Department’s vital mission of protecting the security of our nation, deterring war, and preserving peace.

The Pentagon is looking to “ultimately” develop “AI systems that have the ability to reason as humans do, at least to some extent,” Dr. Porter declared.

“Such a capability would greatly amplify the utility of AI, enabling AI systems to become true partners with their human counterparts in problem-solving,” she explained. “As an example, an AI system with sense-making capabilities could advise a warfighter in a time-sensitive situation on what action to pursue, enhancing the decision-making process by discounting the human’s own biases.”

William Carter from CSIS warned that China is catching up and perhaps even surpassing the U.S. military’s new technology capabilities, namely those related to “artificial intelligence and robotics, miniaturization and ubiquitous connectivity, and quantum computing.”

China has “developed a national strategic plan—in fact, many of them—to overtake us in the race to dominate these new technologies, and are rapidly closing the gap in innovation, deployment, and militarization of these new systems with the U.S.,” he told lawmakers in January.

“We estimate the total spending on artificial intelligence systems in China in 2017 was $12 billion. We also estimate that it will grow to at least $70 billion by 2020,” Gen. Jamieson said in July.

Meanwhile, the Pentagon reportedly spent about $7.4 billion on all emerging technologies in fiscal 2017, including AI.