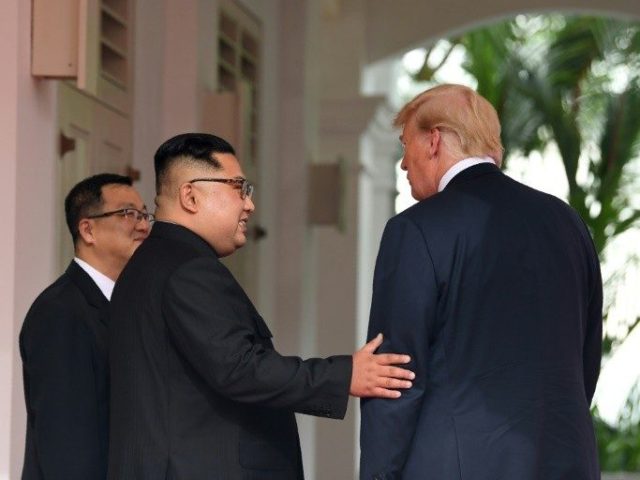 Vice President Mike Pence said from the sidelines of the Association of Southeast Asian Nations (ASEAN) summit on Thursday that President Donald Trump will hold a second meeting with North Korean dictator Kim Jong-un next year. Pence said the United States expects Kim to submit a firm denuclearization plan at the meeting.

“Everything begins with relationships, but now we need to see results,” Pence said in an interview with NBC News in Singapore on Thursday.

Pence stressed the progress made with North Korea so far: “No more missiles being fired, no more nuclear tests and our hostages have come home.” He added that he was honored to be at the ceremony in Hawaii when American troops received Korean War remains from North Korea.

Pence said the U.S. will keep sanctions against North Korea in place “until we have a plan, and that plan is implemented, to achieve complete, verifiable, irreversible denuclearization.”

“The mistakes of the past can easily be described as one administration after another, in both political parties, with regard to North Korea where promises were made for denuclearization, relief was given to North Korea, then promises were broken,” he said.

NBC’s headline for the interview was “Second Trump-Kim Summit to Go Ahead Without List of Nuclear North Korean Weapons,” but the vice president did not actually say that. On the contrary, he made several references to complete and verifiable denuclearization, a goal that could not be achieved without a complete inventory of North Korea’s existing weapons.

The interview posted by NBC can be seen in its entirety below:

“I think it will be absolutely imperative in this next summit that we come away with a plan for identifying all of the weapons in question, identifying all the development sites, allowing for inspections of the sites and the plan for dismantling nuclear weapons,” Pence replied.

How NBC News got from Pence stressing the importance of “identifying all of the weapons in question” and “identifying all the development sites” to Pence saying the summit can “go ahead without a list of nuclear North Korean weapons” is a mystery. The Washington Post, on the other hand, listened to the very same interview and came up with the headline, “Pence: Second U.S.-North Korean Summit Is Deadline For a List of the Country’s Nuclear Sites.”

NBC contrasted Pence’s alleged indifference to a full inventory of North Korean weapons with the Center for Strategic and International Studies report released this week about continued maintenance performed at North Korean missile bases, quoting report author Victor Cha’s admonition that “we can’t negotiate over things they don’t admit having.”

President Trump addressed the CSIS report (or, more precisely, the New York Times story about it) on Tuesday and said U.S. intelligence is fully aware of those missile bases:

The story in the New York Times concerning North Korea developing missile bases is inaccurate. We fully know about the sites being discussed, nothing new – and nothing happening out of the normal. Just more Fake News. I will be the first to let you know if things go bad!

Pence met with South Korean President Moon Jae-in at the ASEAN summit in Singapore on Thursday to discuss the second Trump-Kim summit. He said President Trump is “hopeful” the meeting will “lay the groundwork for achieving our long-term objective of denuclearization.”

Moon responded by saluting the “strong Korea-U.S. alliance” that made the diplomatic breakthrough with Pyongyang possible and thanked President Trump for his “strong leadership and determination.”

He added that Kim Jong-un also expressed “gratitude” for Trump’s role in the process during conversations between the North and South Korean leaders.

“If the second North-U.S. summit is realized, I expect there will be significant progress for the peace process and the complete denuclearization of the Korean Peninsula,” Moon predicted.

Moon also expressed appreciation for Vice President Pence’s attendance at ASEAN, noting that Pence has “a deep connection with Korea just like his father.” The vice president’s late father Edward Pence, Jr. was awarded the Bronze Star for his service in the Korean War.

Reuters and AFP on Thursday anticipated the Trump administration will have trouble maintaining the maximum sanctions Pence recommended because China and Russia have already “eased” pressure, while South Korea is “mulling lifting its own measures against Pyongyang.” President Moon’s administration frequently denies that it plans to lift sanctions against North Korea without international approval.