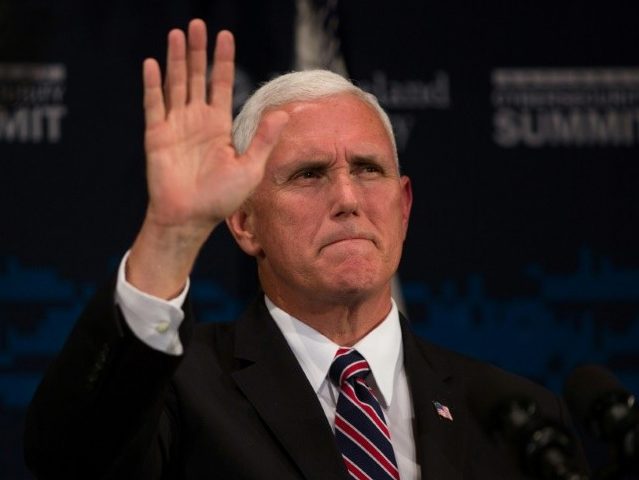 Vice President Mike Pence decided to face his foes head on, refusing to exit the Capitol building through a side entrance as protesters swarmed the area following the confirmation of Justice Brett Kavanaugh to the Supreme Court.

Pence and his security detail had been exiting toward the front steps of the Senate when he appeared to stop for a second as the crowd stationed in the plaza outside the Capitol chanted “Shame! Shame! Shame!”

Assistant Sergeant-at-Arms Jim Morehand reportedly told Pence he could exit through a back entrance if he wanted to escape the protesters. As Pence’s security detail told him about the updated exit plan, the vice president stopped and told his handlers, “Let’s do it.”

The doors opened to the mob of protesters while Pence walked toward his motorcade, waving to the crowd on the way down the steps. Many of the protesters wore black, carried signs with profane language, and disparaged Kavanaugh and President Trump while the Senate voted to confirm Kavanaugh.

The Senate voted to confirm Kavanaugh to the high court in a 50-48 vote, making him the 114th justice to serve on the Supreme Court. The victory for Trump and Republicans shifted the balance of power on the high court.

Today is a historic day for our country as a majority in the U.S. Senate voted to send a new voice to the Supreme Court who will uphold the timeless vision of America’s founders — Judge Brett Kavanaugh. My full statement below: pic.twitter.com/OYlkQEMOCR

The vice president called Kavanaugh’s nomination a “historic day for our country,” adding that Kavanaugh would “arrive at the court with the prayers and esteem of millions of Americans.”