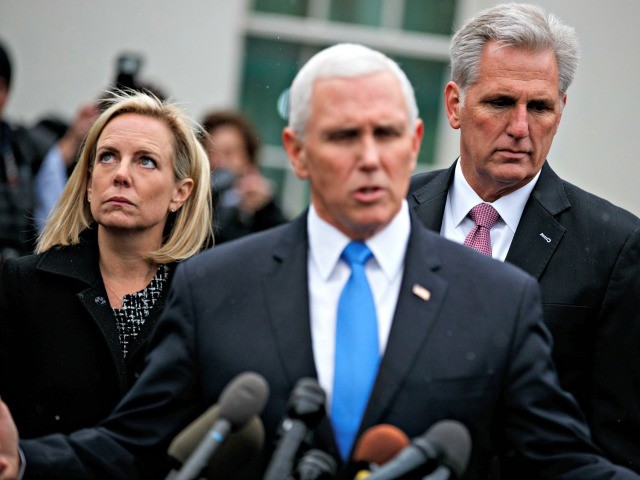 Pence detailed a moment during Wednesday’s White House shutdown meeting with Speaker Pelosi and Senate Minority Leader Chuck Schumer. President Donald Trump asked Speaker Pelosi if she would negotiate border security and wall funding if he opened up the government quickly. “The Speaker of the House said ‘no,’” Pence recounted. He believed at that point the president “thought there was no longer any reason to be talking at this meeting.”

VP Mike Pence recalls the moment President Donald Trump asked House Speaker Nancy Pelosi if she would negotiate border security and wall funding if he did quickly open the government and she flatly refused saying “No” #shutdown #walkout pic.twitter.com/BuZZY3uozb

President Trump walked out of the meeting, announcing on Twitter, “Just left a meeting with Chuck and Nancy, a total waste of time.”

The vice president said the offer put in front of Democrats during Wednesday’s meeting included not only President Donald Trump’s priorities for securing the southern border and addressing the crisis there, but also the priorities of Democrats.

Pence pointed to the 60,000 individuals being apprehended coming across the border every month, two thirds of which are families and unaccompanied minors. “It’s not a situation that our Border Patrol system was ever designed to deal with,” he said calling for reforms and a wall.

The vice president said it should be distressing to tens of millions of Americans and hundreds of thousands of federal workers that Democrats’ only answer is “we will not negotiate.”

“The president said, if I open up the government now would you then negotiate border security and the Speaker said ‘no.’”

Pence directed Americans to call their Congress member and Senator on the issue of securing the southern border and dealing with the humanitarian crisis there.

“Congress should just do their job,” Pence said with marked emphasis.

“I think the president was very calm in trying to continue to put different options on the table to solve this serious crisis at our border,” Scalise told reporters outside the White House. “Last night [the president] laid out some of the problems and challenges we’re facing as a country and how we can get a solution.”

“Today what he did was start to offer some more ideas,” Scalise recounted. He said their teams worked over the weekend, “but at some point the other side has to put a counter offer on the table. ‘No’ is not a valid answer if you’re serious about solving this problem.”

Experts tasked with securing the nation have put the cost of moving toward securing the border at $5.7 billion, a number Scalise referenced. He then rebuked House Speaker Nancy Pelosi for jokingly offering just one dollar to address the problem of border security. He said her reaction and refusal to propose a counteroffer is not fair to those Americans missing a paycheck under the shutdown.

Scalise strongly stated that no one slammed a hand on the table as had been reported.

“On the behalf of the Department of Homeland Security I’m just thoroughly disappointed,” said Secretary Nielsen. “This is a crisis. It is a humanitarian crisis. It is a security crisis and the reality is that walls work.” She said everywhere they’ve put up walls it has worked to reduce illegal immigration by 90-95 percent.