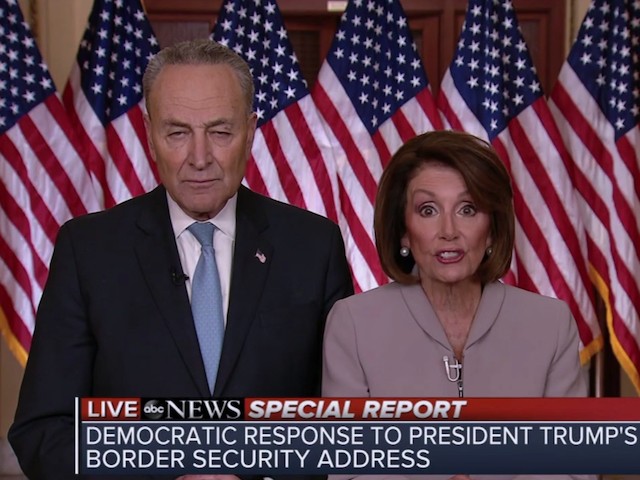 During the Democratic response to President Donald Trump address on border security, House Speaker Nancy Pelosi (D-CA) said the president’s comments were “full of misinformation and even malice.”

Pelosi said, “I appreciate the opportunity to speak directly to the American people tonight about how we can end this shutdown and meet the needs of the American people. Sadly much of what we heard from President Trump has been full of misinformation and even malice. The president has chosen fear. We want to start with the facts. The fact is on the very first day of this Congress, House Democrats passed Senate Republican legislation to reopen government and fund smart, effective border security solutions, but the president is rejecting these bipartisan bills which would reopen government over his obsession with forcing American taxpayers to waste billions of dollars on an expensive and ineffective wall, a wall he always promised Mexico would pay for.”

She added, “The fact is, President Trump has chosen to hold hostage critical services with health, safety, and wellbeing of the American people and with hold the paychecks of 800,000 innocent workers across the nation, many of them, veterans. he promised to keep government shutdown for months or years, no matter whom it hurts. That’s just plain wrong. The fact is, we all agree we need to secure or borders while honoring our values. We can build the infrastructure and roads at our ports of entry. We can install new technology to scan cars and trucks for drugs coming into our nation. We can hire the personnel to facilitate trade and immigration at the border. We can fund more innovation to detect unauthorized crossings. The fact is, the women and children at the border are not a security threat. They are a humanitarian challenge, a challenge that President Trump’s own cruel and counter productive policies have only deepened. And the fact is, President Trump must stop holding the American people hostage and stop manufacturing a and must reopen the government.”