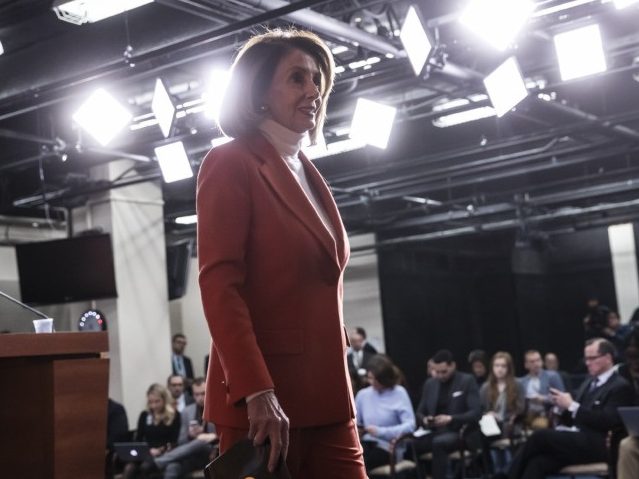 House Minority Leader Nancy Pelosi (D-CA) hopes to exchange her title to Speaker when the 116th Congress convenes in January and is working hard to make that happen, including keeping a high profile in the media.

On Monday the New York Times Magazine published a more than 6,000-word article on its interview with Pelosi, mostly praising the longtime leader in the Democrat party but also revealing she is putting more stock in cooperating with President Donald Trump than launching an effort to impeach him.

“We have to be strategic in whatever we do,” Pelosi told the Times, a nod to those in her party who believe regaining a majority in the House opens the door to investigate the Trump administration.

“In terms of subpoena power, you have to handle it with care,” Pelosi said. “Yes, on the left there is a Pound of Flesh Club, and they just want to do to them what they did to us.”

“That’s not who we are,” Pelosi said. “Go get somebody else if that’s who you want.”

Pelosi told me that she and the House Democrats had every intention of working with President Trump on things like lowering prescription-drug costs, rebuilding America’s infrastructure and protecting the young undocumented immigrants known as Dreamers from deportation. She reminded me of her long stints on the House Appropriations and Intelligence Committees — panels on which, “left to our own devices, we could always find our way in a bipartisan manner.”

“Two really winning issues for us, right?” Pelosi said. “In the districts we have to win?”

“I don’t even think they’re the right thing to do,” Pelosi said.

Not that Pelosi had high praise for Trump and, in fact, compared him to the mass murderer Italian dictator Benito Mussolini.

“Mussolini, he didn’t care what they said about him, as long as they were talking about him,” Pelosi said.

“This second speakership would make her the principal counterweight to a president she unabashedly described to me as ‘a very dangerous man,’ Draper wrote. “It would also most likely be the final act of the 78-year-old legislator’s long career as the most powerful woman in the history of American politics.”

After interviewing a wide swatch of Pelosi supporters, the Draper article addresses those that have increasingly called for a change in leadership in the House during the eight years Democrats were the minority party:

Younger members impatient to distinguish themselves in a body of 435 saw little hope of achieving committee chairmanships; Pelosi, unlike her Republican counterparts, maintained the tradition of allotting them based on seniority. She did this out of deference to the Congressional Black Caucus, according to several former staff members, because African-American members have historically not been granted high party standing except through longevity. But between the unavailability of chairman posts and a leadership pipeline clogged with 70-somethings — Pelosi; Hoyer, the minority whip; and James Clyburn, the assistant minority leader — younger House Democrats have been left to ponder other opportunities.

“You have some of the institutional members say, ‘Who are these upstarts?’ ” Rep. Beto O’Rourke (D-TX) told Draper in 2015. “One member of Congress compared us to spoiled kids, like teenagers who want a car on their 16th birthday. But you look at my class: Tulsi Gabbard, she’s not going to stay in the House for long — she’ll run for governor. Joe Kennedy, the same. Pat Murphy, the same. And they’re all talented, ambitious and good fund-raisers. I’ve just got to think that when you see that 20-year road to be in a position of consequence, other options look a lot more attractive.”

The Times article notes a conference call after the midterms election among some of those who want to challenge Pelosi and put new leadership in place in the House.

“The nine or so dissidents — led by Kathleen Rice of New York and Ed Perlmutter of Colorado — had begun reaching out to about a dozen successful Democratic candidates to see if they were now willing to make good on their publicly expressed skepticism about Pelosi as leader,” the Times magazine reported.

“For me — and I’m even more emphatic about it than I was two years ago — this is about change,” Perlmutter said. “You look in the middle of the country, at the districts we picked up — a lot of the candidates said they wouldn’t support her, or avoided the question. Hundreds of millions of dollars have been spent demonizing her, and it’s permeated the public’s view of her. That’s not her fault. But what she hasn’t done is have a succession plan. And that’s an element of being a leader.”

“In the Trump era, Pelosi told me, it was obvious that the Democrats could not afford to let the president dominate every news cycle,” Draper wrote.

“I do see the role as less workhorse and more show horse now,” Pelosi said.

Describing her as the “probable speaker,” Draper ended his piece by Pelosi setting up her unexpected but proven legacy.

“I suggested that there were sometimes surprises you couldn’t predict,” Draper wrote.

“I don’t think anybody could have predicted it in me,” Pelosi said.