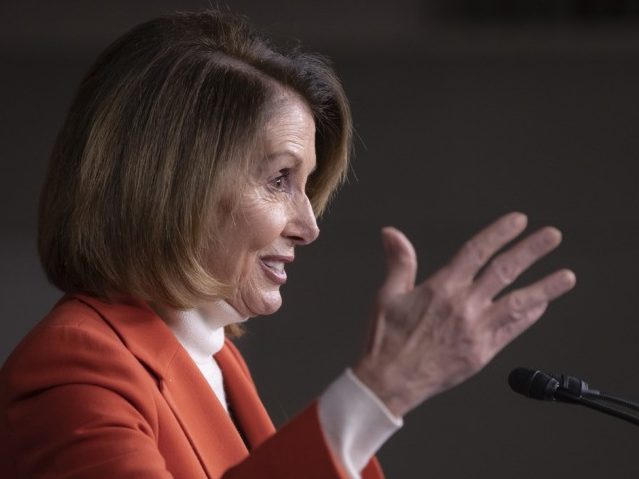 House Minority Leader Nancy Pelosi (D-CA) is busy putting in place the support she needs to regain the Speaker’s gavel when the Democrats retake the majority in January, while an undercurrent of opposition seeking a “fresh face” in leadership continues.

But part of Pelosi’s strategy is warning members of her party that taking her down would give power to a minority of Democrats, similar to the conservative House Freedom Caucus and the influence it has wielded over the eight years of a Republican majority.

“At a meeting Friday of the centrist New Democrat Coalition, a group she rarely visits, Ms. Pelosi argued that allowing her adversaries to take her down would thwart the will of a majority of the party and leave it paralyzed in the same way that the ultraconservative Freedom Caucus has stymied House Republicans,” the New York Times reported.

Pelosi is confident she has the votes in the closed session where she would be nominated, but 17 Democrats have signed a letter thanking her for her service and calling for the next generation of leadership.

The Times reported that Rep. Kathleen Rice (D-NY), one of the lawmakers who signed the letter, said no challenger would come forward until it was a clear Pelosi could not get enough votes on the House floor to get the gavel.

“The whole concept of ‘you can’t beat somebody with nobody’ is a Nancy Pelosi talking point,” Rice told reporters last week. “I get it, it’s pretty compelling.”

“But because of the dynamic that she has set up in harnessing all the power at the top, the first step is showing that she cannot get to 218, and then I believe the challengers will emerge,” Rice said.

So far, Rep. Marcia Fudge (D-OH) is the only one publicly saying she is considering a challenge to Pelosi but has not committed.

spokes for @RepMarciaFudge tells WaPo that she’s not going to make a final decision until after Thanksgiving holiday and is keeping a low profile this wk.

A friend of hers tells us that the travel/fundraising aspect of spkrshp is still weighing on her, may push her away from bid

The speakership vote on the floor on January 3 could result in drama and possible damage to the party’s renewed image and authority.

“It’s going to be about Democratic disarray,” Norman J. Ornstein, a congressional scholar at the American Enterprise Institute, told the Times. “This is almost the definition of a circular firing squad, and the impact that could have on 2020 is quite significant.”

Pelosi, who became the first woman Speaker of the House in 2007, has been one of three Democrat of a certain age that have been in leadership positions for the past 15 years — Pelosi, 78, House Minority Whip Steny Hoyer (D-MD), 78, and Rep. James Clyburn (D-NC).

Pelosi, meanwhile, remains undeterred, according to the Times.

Ms. Pelosi, a legendary legislator, vote-counter, campaigner and fund-raiser who served as speaker from 2007 to 2011, has expressed supreme confidence that she will be elected again in January. She has enlisted powerful allies to weigh in on her behalf and worked to build an air of inevitability around her bid, including through a letter of support circulated by a veteran lawmaker, Representative Nita M. Lowey of New York, and signed by 61 Democratic women as of Friday afternoon. (An additional four women elected this month have since said publicly that they will back her.)

“Would-be challengers are keenly aware of the immense power Ms. Pelosi wields, and fearful of institutional retribution and reputational damage if they step forward to test the status quo,” the Times reported.