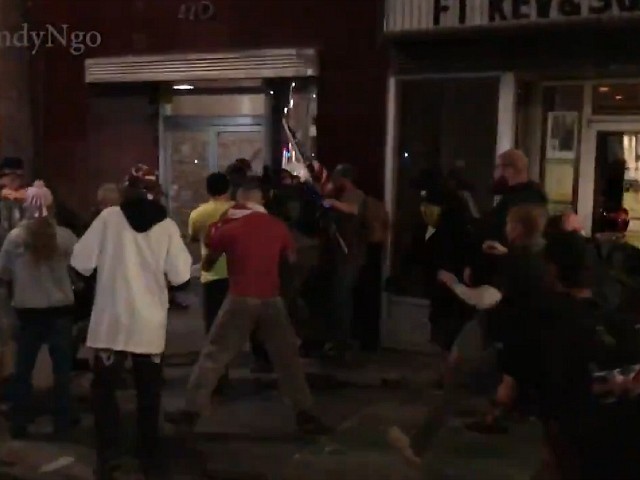 The streets of Portland, Oregon, became violent over the weekend as the right-wing Patriot Prayer group clashed with black-clad and masked Antifa as ongoing protests and counter-protests in the city often go unchecked by police.

The violent clash on Saturday came after a protest on Friday was held following the death of Patrick Kimmons, whom police shot on September 30 after he allegedly shot two other men.

At Friday’s protest, a 74-year-old man drove through a crowd of protesters who responded by attacking the car and breaking a window. The incident was captured on video.

“Portland Mayor Ted Wheeler came under fire over a viral video showing Antifa protesters blocking traffic and harassing drivers, but he says he supports the decision by police to watch from a distance without getting involved,” the Washington Times reported.

“I was appalled by what I saw in the video, but I support the Portland Police Bureau’s decision not to intervene,” Wheeler said at a Friday press conference. “This whole incident will be investigated.”

That’s when Patriot Prayer organized what it billed as a “law and order” rally on Saturday to demand Portland police respond to such violence and called for Wheeler to resign.

But when they arrived on Saturday, they were met by Antifa counter-protesters.

Journalist Andy Ngo captured much of the clash between the two groups on video, which he tweeted as it unfolded.

And then it became a full-on brawl — with lots of pepper spray flying everywhere. I couldn’t really see what I was recording until now. #Portland pic.twitter.com/5NlOZXHYHw

“And then it became a full-on brawl — with lots of pepper spray flying everywhere. I couldn’t really see what I was recording until now. #Portland,” Ngo tweeted.

“The mayor has been accused of taking a kid-gloves approach to the protests that routinely roil the liberal enclave, such as the summer occupation of the Immigration and Customs Enforcement building, which saw Portland police refuse to assist unless federal officers were in physical danger,” the Times reported.

The Portland Police Bureau reported seeing protest and counter-protest participants outfitted with hard knuckle gloves, knives and firearms earlier in the evening. Police said they made no arrests Saturday night, but will continue to investigate.

The two sides exchanged taunts and threats as police stood by and warned against physical confrontation.

The melee, which lasted more than a minute, ended when riot cops rushed in and fired pepper balls at the street fighters.

Wheeler has not tweeted about Saturday’s violence.