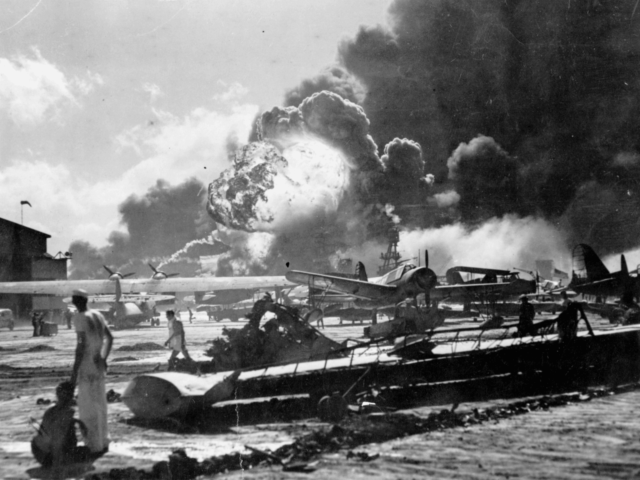 O’Donnell joined Breitbart News Editor-in-Chief Alex Marlow on Friday’s edition of SiriusXM’s Breitbart News Daily on the 77th anniversary of what Franklin Delano Roosevelt described as a “date which will live in infamy.”

Marlow invited O’Donnell to share some historical context in the lead-up to Japan’s attack on America’s navy at Pearl Harbor.

“Seventy-seven years ago, at 7:48, over 350 planes hit the United States at Pearl Harbor, but the lead-up to that is interesting,” said O’Donnell. “The United States was basically very concerned about Japan’s activities in China, where they had invaded earlier. There had been a series of diplomatic negotiations that failed, and we had conducted, basically, an oil embargo upon Japan, and that’s really what brought Japan to its knees. It then decided to attack Malaysia where there were large oil reserves, and it needed to neutralize the Pacific fleet in order to conduct those operations, so it went after Pearl Harbor.”

O’Donnell continued, “Japan had been really obsessed with a single knock-out blow since the Russo-Japanese War in 1904-1905 where they basically annihilated the Russian fleet in the Tsushima Straits. This is where they really had a sense that they were looking for a strike or a surprise attack that could wipe out the entire American fleet, so they went with Pearl Harbor as an initial strike to slow us down. … They knew that they would not be able to really win in a war of attrition with us because the manufacturing capability of the United States was just enormous, at the time.”

O’Donnell added, “There was a lot of information out there that the Japanese was mobilizing for war, but nobody could completely put all of thse dots together. There are a lot of conspiracy theories out there about this, but a lot of the dots were just not connected. We were technically at peace at the time [with Japan]. The Japanese military had a major debate whether or not to announce war an hour or 30 minutes before Pearl Harbor’s attack, or after. Basically, it didn’t come off that way, the Japanese delivered a very muddled message — they didn’t even include a declaration of war — an hour after the attack took place.”

Marlow asked why America had been unprepared for the Japanese attack.

“Many factors [led to American unpreparedness],” explained O’Donnell. “Isolation, being one; wanting to stay out European or Pacific affairs. Another factor is the Great Depression. America is really brought to its knees by the depression. Economically we’re in a dire shape, and there’s not really any money to spend on the military. At least decisions are made not to spend as much money.”

Marlow inquired, “Give me one more lesson for our citizens, or maybe our elected leaders to hear [from Pearl Harbor].”

Marlow asked about “physical” versus “mental” national preparedness for war. “I do feel like sometimes, at this particular moment, we’ve got some great generals [and] equipment, but I don’t know if we’ve got the mental willpower. … What do you think?”

O’Donnell responded, “I think preparedness is a multifaceted thing.It’s not only having the equipment and the training, but also the tactics. You don’t want to fight the last war. You want to fight the next war; what’s coming up, and war is constantly changing and evolving, and the other thing is will. It’s political will. Whether or not you have the willpower to sustain a major war.”

“I think Breitbart’s done a great job of highlighting American history on these anniversaries such as Pearl Harbor,” stated O’Donnell. “With World War I, Breitbart really focused on many of the major battles of World War I that were chronicled in the book, ‘The Unknowns.’”