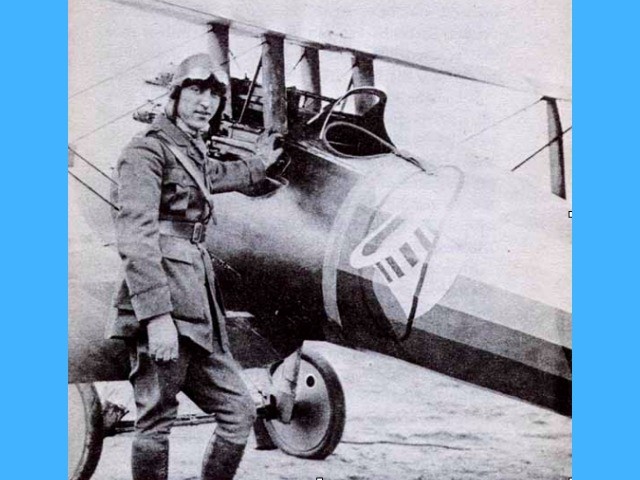 The American pilot turned his De Haviland DH-4 biplane sharply to avoid fire from a German plane in the air above St. Mihiel, France. As he did, castor oil that had leaked from the engine dripped onto his uniform and splattered on his goggles. The pilot grimaced. The oil, which was used to lubricate the engines on DH-4s, got everywhere. He could even taste it in his mouth. That meant he would likely have terrible stomach cramps and the accompanying diarrhea by the time he returned to base.

The discomfort was far from the worst part of being an American military pilot in 1918. The De Havilands were constructed of canvas stretched over a wooden frame. If one of the many bullets spewing out of the German planes and ground-based machine guns happened to strike his fuel tank, the “Flying Coffin,” as the pilots called the DH-4s, would instantly ignite. And because he had no parachute, the pilot would likely burn to death before his plane crashed to the ground.

Still, it was a risk he and the other American pilots were willing to take.

This week marks the 100th anniversary of the Battle of St. Mihiel. This was the United States’ first major offensive of World War I and one of the first battles ever that featured coordinated, combined arms attacks by airplanes, tanks, infantry and artillery. The primary mission was to reduce a salient, a bulge in the front lines where German forces had pressed forward. The unspoken, larger goal was for the relatively untested American forces to prove to their European Allies that they could turn the tide of the war.

The story of that epic battle is retold in my new, best-selling book, The Unknowns: The Untold Story of America’s Unknown Soldier and WWI’s Most Decorated Heroes Who Brought Him Home. Recently released, The Unknowns follows eight American heroes who accomplished extraordinary feats in some of the war’s most important battles. As a result of their bravery, these eight men were selected to serve as Body Bearers at the ceremony where the Unknown Soldier was laid to rest at Arlington Cemetery.

Several of those Body Bearers, including Corporal Thomas Saunders of the combat engineers, Color Sergeant James W. Dell of the field artillery and Sergeant Samuel Woodfill of the infantry, as well as Sergeant Edward Younger, the man who selected the body that became the Unknown Soldier, fought in the battle.

Also present that day was America’s greatest WWI ace, Captain and Squadron Commander Eddie Rickenbacker. Because he was a former race car driver, the Army had first assigned Rickenbacker the task of driving the car belonging to General John J. Pershing, commander of the American Expeditionary Forces (AEF). But the boring job of chauffeur held little attraction for the adrenaline junkie, who soon sought and received a transfer to the 94th Aero Squadron.

The 94th originally consisted of Ivy League graduates and millionaire trust fund babies who considered Rickenbacker a country bumpkin. One Yale alumnus sneered, “[Rickenbacker] was a lemon on an orange tree.” But the race car driver soon proved himself, and after the war, he was the head of Eastern Airlines.

On the morning of September 12, 1918, bad weather grounded the aircraft as the battle began, but when the fog burned off in the midday sun, Rickenbacker became one of nearly 1,500 American, French, Italian, British, and Portuguese pilots in the skies. Surprised by the show of air power, the Germans scrambled to get more than 500 planes aloft. The resulting epic dogfight was the largest concentration of military aircraft the world had ever seen up to that time. The silent movie Wings, the first movie to win an Academy Award for Best Picture, depicted the battle in a climactic scene.

For Rickenbacker, receiving the orders to attack at St. Mihiel was “an exciting moment in my life.” He recalled, “I suppose every American in the world wanted to be in that great attack. The very sound of the guns thrilled one and filled one with excitement. The good reputation of America seemed bound up in the outcome of that attack.”

After dressing and eating quickly, Rickenbacker and the others waited for the weather to improve enough to get off the ground. After noon, they got their chance. “At 60 feet above ground [flying] straight east to St. Mihiel, we crossed the Meuse River and turned down its valley towards Verdun,” he remembered. “Many fires were burning under us as we flew, most of them well on the German side of the river. Villages, haystacks, ammunition dumps and supplies were being set ablaze by the retreating Huns.”

Darting through the choking smoke, Rickenbacker spotted an attractive target: a group of German horse-drawn artillery galloping up the roadway. “Dipping down at the head of the column I sprinkled a few bullets over the leading teams,” Rickenbacker later wrote. “Horses fell right and left. One driver leaped from his seat and started running for the ditch. Half-way across the road he threw up his arms and rolled over, upon his face. He had stepped full in front of my stream of machine-gun bullets!”

He added, “All down the line we continued our fire — now tilting our aeroplanes down for a short burst, then zooming back up for a little altitude in which to repeat the performance. The whole column was thrown into the wildest confusion. Horses plunged and broke away. Some were killed and fell in their tracks. Most of the drivers and gunners had taken to the trees before we reached them.”

The battle continued for several days, giving Rickenbacker many opportunities to face off against German pilots. At one point, three German Fokkers massed around the American ace. “At odd moments I would try to admire their extraordinary adroitness in handling their machines, for the heavens seemed quite crowded with those three dancing Fokkers. No matter where I turned there were always at least two of them there before me!” he said. “I need no more living proof of the flying ability of that celebrated German Squadron of fighting pilots. They whipped their machines about me with incredible cleverness.”

Despite the skillfulness of the German pilots, Rickenbacker managed to shoot down four enemy planes in the skies above St. Mihiel. He received two Distinguished Service Crosses for his actions in the battle. Before the month was over, he was involved in another dogfight where he took on seven German planes on his own. “Disregarding the odds against him, he dived on them and shot down one of the Fokkers out of control. He then attacked one of the Halberstadts and sent it down also.” His heroism would later result in a Medal of Honor for the pilot.

At St. Mihiel, the Allied planes — with their three-to-one numerical advantage — ultimately proved to be too much for their German counterparts. On the ground, the Americans also cruised to a victory. Lieutenant Colonel George Patton,304th Tank Brigade commander, who would rise to fame in World War II, was proving how effective U.S. tanks could be on the modern battlefield. The Marines and Army also performed well, bisecting the salient and then chasing the Germans back to the Hindenburg Line.

It was an overwhelming victory for First Army. Over the course of four days, the Americans captured 15,000 German prisoners, along with hundreds of artillery pieces and machine guns. Publicly, Pershing expressed pleasure with the AEF’s performance in its first battle fighting as a cohesive unit. “We gave ’em a damn good licking, didn’t we?” he bragged.

Critically, the offensive sent the Germans into a state of disorder and confusion about where the American hammer wielded by First Army would fall next. It was an important initial victory, but the AEF now faced a far greater challenge. They had just two weeks to conduct the Herculean task of moving their army and artillery more than 50 miles north to the Meuse-Argonne.

There, Americans would test their offensive capabilities against a defensive nightmare that seemed all but impregnable. U.S. flyboys would again play a vital role.

Patrick K. O’Donnell is a bestselling, critically acclaimed military historian and an expert on elite units. He is the author of eleven books. The Unknowns is his newest, and it is featured in Barnes & Noble stores. O’Donnell served as a combat historian in a Marine rifle platoon during the Battle of Fallujah and speaks often on espionage, special operations, and counterinsurgency. He has provided historical consulting for DreamWorks’ award-winning miniseries Band of Brothers and for documentaries produced by the BBC, the History Channel, and Discovery. PatrickkODonnell.com @combathistorian