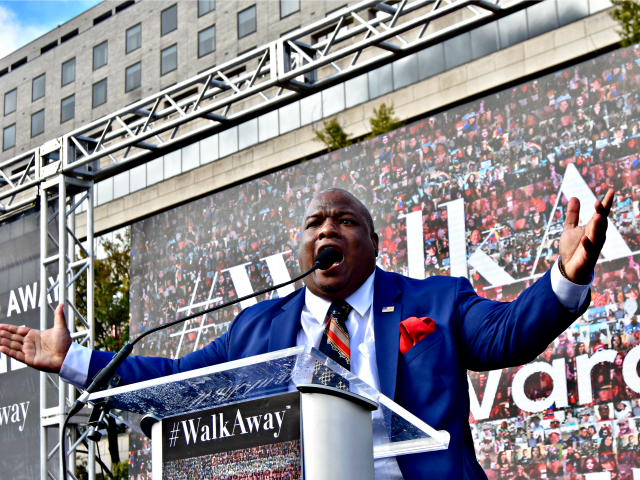 Pastor Mark Burns gave a fiery speech to the hundreds of former Democrats gathered at Freedom Plaza in downtown Washington, DC, Saturday, declaring to the world that he and many others “are tired” of Democrats’ “race-baiting” tendencies.

“I am so excited to be here today, to make a loud declaration to the world that we are tired of those race-baiting Democrats,” Burns told the crowd Saturday afternoon, speaking to hundreds of conservatives who had pledged to #WalkAway from the Democrat Party.

Burns, who serves as pastor of Harvest Praise & Worship Center in Anderson, SC, said he was happy to stand with the #WalkAway movement like so many others who were tired of “the bigotry” and divisive nature of “identity politics” in the Democrat Party.

But the South Carolina pastor stressed that despite Democrats’ divisive nature, the #WalkAway movement encompasses everyone.

“It doesn’t matter if you’re black, white, brown, red, Christian, Jewish,” Burns said. “If you love this country…you are part of the #WalkAway movement.”

Burns also took time to rail against the liberal media, saying that the people of this “Christian nation” belong to God and not the media.

“This is why they hate us. They hate us because they can’t stop us,” he added.

The South Carolina pastor fired up the crowd, encouraging them that Republicans are going to win the 2018 midterm elections and keep a majority in the House and Senate.

“We’re gonna win these midterms and make sure we retain the House and Senate to support who I believe the greatest president America has ever seen, Donald J. Trump,” he said, prompting the crowd to respond with chants of, “Trump, Trump, Trump!”