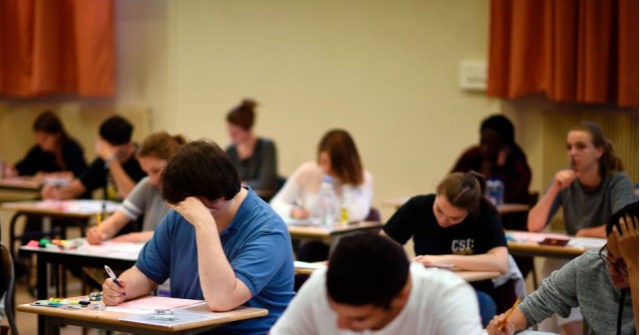 The commissioner of the New Hampshire Department of Education (DOE) responded Thursday in a press statement to the concerns of some parents who reported their children taking the recent SAT test were requested to write an essay on an excerpt from a 2014 op-ed by current presidential candidate Sen. Bernie Sanders (I-VT).

“The column in question was probably a poor choice, in hindsight,” said Commissioner Frank Edelblut. “However, it doesn’t affect the ability of students to be able to read and process the concept of the piece and whether or not the author made a persuadable argument — which is the purpose of the essay in the first place.”

As the DOE explained, students taking the College Board’s SAT test in 2019 were asked to write an essay on a passage from Sanders’ Wall Street Journal op-ed titled, “There’s No Need to End Saturday Mail Delivery,” which was published on March 4, 2014, and reprinted on Sanders’ website.

Breitbart News reached out to the College Board, asking if the exact test question could be sent, and whether students were required to contrast Sanders’ views against privatization of the U.S. Postal Service with that of an individual with a different perspective.

Zach Goldberg, executive director of media relations and external communications with the College Board, promptly replied to the inquiry, but did not send the test question:

The SAT asks students to read and analyze a variety of passages, including published works with a range of perspectives. For example, students taking the SAT have recently encountered passages written by President Ronald Reagan and Republican members of Congress, including Senator Ted Cruz and Representative Darrell Issa. Students are instructed not to explain whether they agree or disagree with the author.

The New Hampshire DOE stated it is working with the College Board on the issue “to ensure that there aren’t any concerns from Granite State parents in the future.”

About 13,000 students in New Hampshire took the SAT this year, both the written version on March 27 and the digital test administered through April 9. One concerned parent raised the issue of the question about Sanders’ column on April 10, reported the DOE.

As part of the essay section of the SAT, students were given a section of a topical column to analyze and are required to read it, explain how the author builds an argument to persuade an audience, and support their explanation with evidence from the section.

Students are not asked to agree or disagree with the position taken in the section or asked to write about their personal experience.

While the College Board did not provide Breitbart News with the specific excerpt from Sanders’ op-ed that was used in the SAT question, Sanders wrote in his column:

There are very powerful and wealthy special interests who want to privatize or dismember virtually every function that government now performs, whether it is Social Security, Medicare, public education or the Postal Service. They see an opportunity for Wall Street and corporate America to make billions in profits out of these services, and couldn’t care less how privatization or a degradation of services affects ordinary Americans.

For years, antigovernment forces have been telling us that there is a financial crisis at the Postal Service and that it is going broke. That is not true. The crisis is manufactured.

The New Hampshire DOE noted it received this information from the College Board:

According to the College Board, SATs are developed three years in advance and the final test is pre-tested a year before going live. In other words, the column was first considered for the current test a year before Sen. Sanders’ first campaign for president and pre-tested a year before his announcement for the 2020 election. According to the College Board, recent SATs have included passages written by President Ronald Reagan, U.S. Sen. Ted Cruz, R-TX, and U.S. Rep. Darrell Issa, R-CA.

1) Why was there an Essay Question on my daughter’s SAT test asking her to explain why Bernie Sanders speech was effective??

Regardless of any political beliefs this is underhanded and just wrong.

2) The whole country takes mandatory SAT’s yesterday and my daughter was one of them … she told me that the last question was critiquing a speech that Bernie Sanders made on not privatizing the post offices. His arguments/opinions put out there without any opposing views.

Banfield reported on one parent’s comments regarding the essay question:

“Notice how the question is couched. It’s sort of like asking, ‘Explain why Hillary Clinton isn’t President even though she deserved to win.’ It’s an opinion framed as a fact.

The problem isn’t that they included a speech from a political candidate. The problem is that they presented opinion as fact. It’s called a ‘mind virus.’”

The College Board’s SAT college admissions tests and the Advanced Placement (AP) program have been the subject of significant controversy in recent years.

David Coleman, College Board president, was a chief “architect” of the Common Core State Standards. Once he became president of the College Board, he set out to align the SAT with Common Core, as he also welcomed members of former President Barack Obama’s reelection campaign — Organizing for America (OFA) — to his student data-collection team.

At a conference of the Bill Gates Foundation-supported Strategic Data Project in May 2013, Coleman admitted the Common Core standards were not “state-led.”

“When I was involved in convincing governors and others around this country to adopt these standards,” Coleman said during his keynote, “it was not ‘Obama likes them’ — do you think that would have gone well with the Republican crowd?”

After convincing 45 state boards of education to adopt the unproven Common Core standards  — which one education analyst now calls the “worst large-scale educational failure in 40 years” — Coleman assumed the head post at the College Board and tapped Nate Silver, Google CEO Eric Schmidt, the Strategic Data Project, and Harvard’s Center for Education Policy Research to assist with the collection of student data.

As Banfield observed, in February 2018, Coleman was rebuked for using the Parkland, Florida, school shooting to promote the College Board’s AP program.

Education Week observed that, in an email letter to members of the College Board, Coleman noted a speech by Marjory Stoneman Douglas High School student Emma Gonzalez, and boasted that her address was “infused with references to her AP Government class.”

“I am compelled to share the unadulterated, impassioned voice of a student, drawing on her education as both shield and sword in the aftermath of terrible events,” Coleman wrote.

Coleman also noted that a reporter who interviewed student David Hogg wrote: “In the past year, Hogg’s interest in journalism has grown stronger. His AP U.S. History class recently learned about the Pentagon Papers and the role journalists — ‘the fourth check on the government,’ he said — play in the United States.”

Coleman’s letter led to a firestorm of criticism from education professionals at all levels:

In all seriousness, who are the individuals at the @CollegeBoard that wrote and approved the sending of this message?!

Absolutely disgusted with the horrible judgement. An apology should be made immediately in addition to fixing the mistakes that would allow this to be sent. pic.twitter.com/bbETbcaMm9

Seriously, @CollegeBoard How many people did you have take a look at that email that David Coleman just sent about the Florida shooting? Did you try to turn a national tragedy into a promotional opportunity? I’ve seldom seen something in poorer taste.

Is this really the right moment to extol the virtues of the AP Program? https://t.co/VK8XdAI5jQ

In April 2018, a planned updated edition of an APUSH textbook taught students that white Christian Americans are finding it “difficult to adjust” to becoming a minority. The textbook suggested that President Donald Trump’s election occurred because his apparent “racism connected with a significant number of primary voters.”

“This move resulted in calls to break the College Board’s testing monopoly,” Banfield wrote. Politicizing U.S. History was not going to happen without controversy or a fight.”

That “politicization” led to more colleges abandoning the SAT as their admissions test of choice.

“Though a massive publicity campaign about the ‘redesigned’ SAT encouraged more students to take that exam, it failed to stem the rapidly growing movement toward test-optional admissions policies, in which neither the SAT or rival ACT are required of most applicants,” said Robert Schaeffer, public education director of the National Center for Fair & Open Testing (FairTest).

Since plans for the revised test were announced,130 colleges and universities dropped SAT and ACT requirements. That’s a pace of one every two weeks. Schools increasingly recognize they do not need the SAT — old or new — to make high-quality admissions decisions.

More than 1,020 accredited, bachelor-degree institutions now will evaluate all or many applicants without regard to test scores. The test-optional list includes more than half of all “Top 100” liberal arts colleges and a total of 320 schools ranked in the top tiers of their categories by U.S. News & World Report.

A new competitor to the College Board’s SAT and rival ACT is the Classic Learning Test (CLT), an effort to encourage a return to classical education in the United States. In just two years, the number of students who took the CLT has grown from 1,000 in 2016 to more than 10,000 in 2018. A sample test can be viewed on the CLT’s website.

National Review reported on the rapid success of the CLT:

In short order, the CLT has started to become to standardized tests what homeschooling and the classical-education movement are to public schools: a flourishing alternative for parents and teachers whose vision of learning differs sharply from what goes on in most of America’s classrooms. Its continued success may even persuade some schools to return to more traditional content.

“We’re trying to encourage familiarity with the Western canon and offer a rigorous measure of reasoning, education, and academic formation,” said Jeremy Tate, one of the founders of CLT. “We’ve removed the great questions of life from our public schools. Nobody studies philosophy, ethics, or religion. Any element of the transcendent is gone. Everything is utilitarian and the students are bored.”