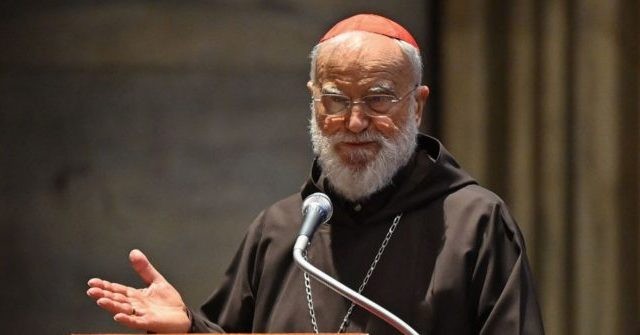 ROME – The preacher of the papal household railed against political divisions that “polarize Catholics” in his homily on Christ’s passion and death Friday.

“What is the most common cause of the bitter divisions among Catholics? It is not dogma, nor is it the sacraments and ministries, none of the things that by God’s singular grace we fully and universally preserve,” said Cardinal Raniero Cantalamessa in the Good Friday service in Saint Peter’s Basilica.

“The divisions that polarize Catholics stem from political options that grow into ideologies taking priority over religious and ecclesial considerations and leading to complete abandon of the value and the duty of obedience in the Church,” he warned during the evening ceremony, attended by Pope Francis and a handful of clergy and members of the faithful.

“In many parts of the world, these divisions are very real, even though they are not openly talked about or are scornfully denied,” said Cantalamessa, a Franciscan friar who has been preacher of the papal household since 1980. “This is sin in the strictest sense of the word. The kingdom of this world becomes more important in the person’s heart than the Kingdom of God.”

“Brotherhood among Catholics is wounded,” he continued. “Divisions between Churches have torn Christ’s tunic to shreds, and worse still, each shredded strip has been torn into even smaller pieces. I speak of course of the human element of it, because no one will ever be able to tear the true tunic of Christ, his mystical body enlivened by the Holy Spirit.”

The cardinal said that the union of the Church is guaranteed by Christ but divisions among Christians are a scandal that sullies the witness of believers.

“In God’s eyes, the Church is ‘one, holy, catholic, and apostolic’ and will remain so until the end of the world,” he said. “This, however, does not excuse our divisions, but makes them more guilty and must push us more forcefully to heal them.”

Cantalamessa said that divisions among Christians is the work of Satan, who is the divider par excellence.

“Promoting division is the work par excellence of the one whose name is ‘diabolos’ that is, the divider, the enemy who sows weeds, as Jesus taught,” Cantalamessa said. “We need to learn from Jesus’s example and the Gospel.”

The cardinal said that despite the strong political polarization of his time, Jesus did not side with any party, refusing to be drawn into one or the other.

Cantalamessa also urged his hearers to make a serious examination of conscience to see whether they have encouraged these divisions, and if so, to “be converted.”