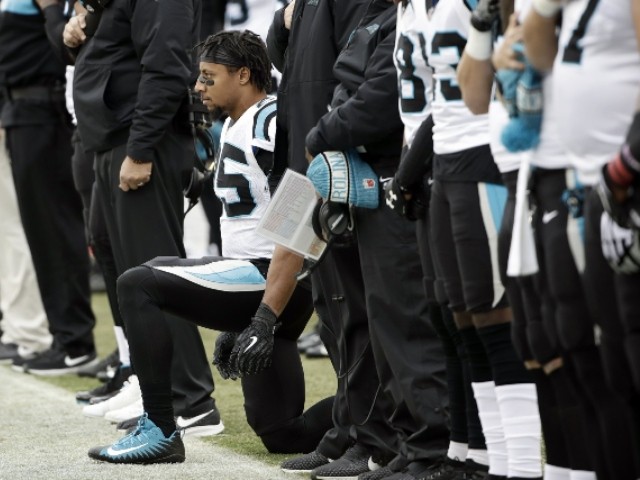 Calling him a “sellout,” Carolina Panthers safety Eric Reid is on the attack for the second time against Philadelphia Eagles player and fellow social justice activist Malcolm Jenkins.

After the Panthers’ Sunday victory over the Baltimore Ravens, Reid again slammed Jenkins for the 2017 player’s coalition deal with the league to spend $89 million in league money on social justice issues in exchange for ending the anthem protests, according to CBS Sports.

Reid accused Jenkins of working to enrich himself with the NFL spending deal and to “get his organization funded.”

The former San Francisco 49er added that Jenkins called him on the phone to ask him what the league could do to induce him to end his anthem protests. Jenkins offered five million in NFL spending, but Reid insisted he told Jenkins “no” and then ended the conversation.

Reid also said that Jenkins phone call was enough for him to recommend that his block of players quit the players coalition.

Eric Reid expanding on his comments about Malcolm Jenkins https://t.co/DLSpJMrGIL

While Jenkins and his group of players have stopped their protests, Reid has re-started his protests upon being signed by the Panthers.

But Washington Redskins cornerback Josh Norman was incensed by Reid’s renewed attack and jumped in on Jenkins’ side slamming the Panthers player for his attack on Jenkins. Norman said that Reid was not just attacking Jenkins alone, but was perpetrating “a slap in the face” to every player in the coalition.

“He’s not only taking a shot at [Jenkins]; he’s taking a shot at everyone in the Players Coalition,” Norman said according to The Washington Post. “I’m a part of that, a lot of guys are a part of that, and I feel his direction was as if, because he was a part of it at one point in time, he went to the direction of, ‘okay, if Kaepernick is not the leader, then this is all for naught.’ And our take was, ‘I’m sorry, but if guys voted for [Kaepernick] to be that, then okay, so be it,’ but it wasn’t that.”

Norman went on to ridicule Reid. “If you want to be a parakeet: ‘What you say, Kap? What you say?’ You can say that all you want, but the thing is, you can’t tell another man what they doing if they not going to come in here and be a man about themselves and tell us the direction of what you want to do,” Norman sneered.