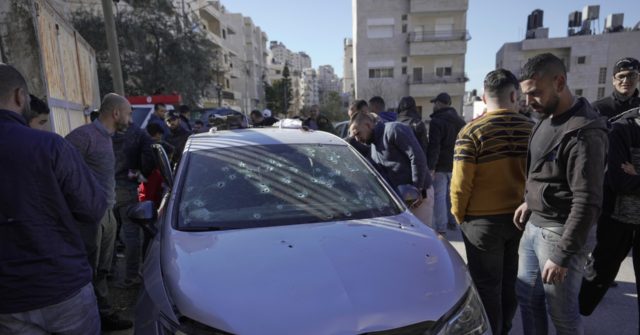 Three armed Palestinian terrorists were killed in a rain of bullets by Israeli forces Tuesday in a rare daytime operation in the West Bank, in what the Palestinian Authority referred to as a “horrific crime.”

“Our forces proved today, again, that there is no immunity for terrorists,” Israeli Prime Minister Naftali Bennett said in a statement. “Whoever hurts us will be hurt.”

The three gunman, who were part of the Al-Aqsa Martyr’s Brigade that is affiliated with PA President Mahmoud Abbas’ ruling Fatah faction, were part of a cell that was behind shooting attacks against Israeli soldiers and civilians in recent weeks.

More than 80 bullets were fired at a car carrying the terorists, Palestinian media reported.

Israel Police said that the three were shot after they tried to shoot at officers from the Yamam police counterterrorism unit with M16 assault rifles.

Palestinians hung a Nazi swastika flag next to an Israeli military base in a village near the West Bank city of Hebron on Saturday. https://t.co/cSy3OQIBSM

The Jerusalem Post quoted a Yamam commander as saying: “The cooperation between the Shin Bet [security agency] and the IDF is unparalleled in the fight against terrorism. The terrorist cells know that the Shin Bet, the Yamam and the the IDF will reach any terrorist who tries to harm our forces and the citizens of the State of Israel.”

“I recently ordered that preventive actions against shooting attacks and troop presence in central arteries and areas of the [West Bank] be stepped up,” he wrote on Twitter. “We’ll continue with proactive operations, prevent [attacks] and capture anyone who tries to hurt people.”

Thousands of Palestinians turned up for the funeral of the three in Nablus, calling on terror groups including the Islamic Jihad and Hamas to avenge their deaths.

Member of Knesset from the Arab majority Joint List party, Ofer Cassif, slammed the Israeli operation on Tuesday calling it an “extrajudicial execution” and “a mafioso and cowardly act that will only lead to further bloodshed,” the Times of Israel r

The Palestinian Authority Foreign Ministry condemned the shooting “in the most severe terms,” saying the terrorists were “executed.”lled

The PA further called on the international community, including the UN, “to condemn this heinous crime and work to bring the perpetrators to justice.”