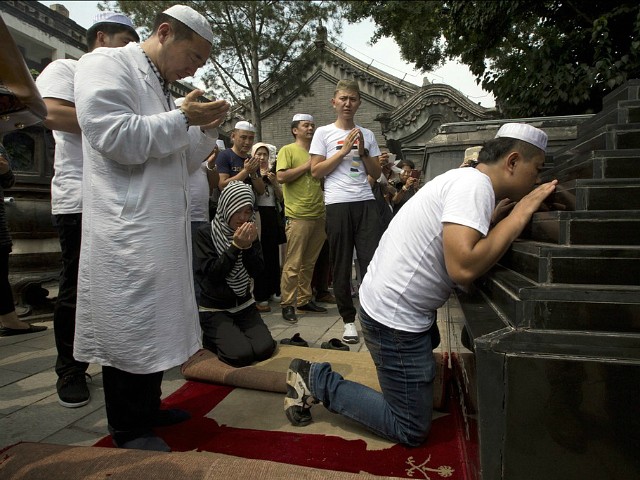 The national security adviser to Pakistan’s Prime Minister Imran Khan recently dismissed China’s internment of millions of Muslims in concentration camps as a “non-issue,” a declaration the World Uyghur Congress, an advocacy group for the persecuted minority, condemned on Thursday as “shameful.”

National Security Adviser Moeed Yusuf made the comments during the first televised interview of a Pakistani official on Indian television since tensions escalated between the two countries in Kashmir in 2019. Yusuf repeatedly referred to human rights atrocities against Muslims, particularly the Muslim Uyghur minority in China’s Xinjiang region, as a “non-issue” and claimed that Pakistani officials had confirmed China was committing no human rights crimes there.

Pakistan is formally an Islamic country that adheres in part to sharia, the Islamic law, despite being home to sizable Christian and Hindu minorities. Pakistani courts have the power to sentence a defendant to death if convicted of certain types of blasphemy, such as defamation of Muhammad or desecration of a Quran.

Islam is one of five legal religions in China – along with Taoism, Buddhism, Catholicism, and Protestant Christianity – but the Communist Party only allows its practice under the control of the Party in a “patriotic” manner. Ethnic minorities often face accusations of “unpatriotic” Islamic practices, and Beijing has used the alleged threat of jihadist infiltration to impose policies such as the construction of concentration camps, banning fasting during Ramadan and Islamic garb on public transit, and banning children from mosques.

India’s The Wire broadcast the interview, led by journalist Karan Thapar, on October 15:

Speaking about Prime Minister Imran Khan’s silence on the Uighurs while making accusations of genocide in Kashmir, @YusufMoeed said this was “a false equivalence” and the Uighurs were a “non-issue”.

He said that he had personally studied the matter.https://t.co/uijW7ypZqq pic.twitter.com/CsQpKyg6JC

Thapar struggled to get Yusuf to address the issue of Uyghur persecution at all for much of the interview, framing it as a contradiction for Khan – an Islamist who regularly uses international venues to demand global blasphemy laws and has accused India on multiple occasions of “Nazi” tactics and “genocide” in Kashmir. Khan has aggressively avoided the Chinese persecution of Muslims and refused to address it under his call for a war on “Islamophobia,” on one occasion claiming he simply had no information on the matter.

“At the UN, when Prime Minister Imran Khan speaks about Kashmir, he accuses India of genocide, he accuses India of what he calls ‘wanting a final solution’ – yet he hasn’t got a word to say about what’s happening to the Uyghurs in China,” Thapar noted, prompting some offended crosstalk with Yusuf.

“Here is what I will tell you, Karan: China and Pakistan are friends like none other. We have a completely transparent relationship, virtually everything under the sky we discuss. Uyghurs is a non-issue,” Yusuf asserted.

“Even our delegations have visited, we have seen, and we are 100 percent satisfied that it’s a non-issue,” he continued. “The West can say what it wants. I am telling you as a responsible official, we know everything we need to know about the Uyghurs and everything else in China as they do about us. We have zero concerns, absolutely zero concerns.”

“That’s not what Imran Khan said to The Financial Times last year. He said, ‘Frankly, I don’t know much about it,’” Thapar recalled.

“Clearly, we are 100 percent satisfied with our Chinese friends, full stop,” Yusuf repeated. “It’s a non-issue! It never comes up because it’s just not an issue. He doesn’t waste time on non-issues.”

The Pentagon estimated in mid-2019 that the Communist Party had imprisoned as many as three million people – most of them Muslim Uyghurs, Kazakhs, and Kyrgyz locals in Xinjiang – in concentration camps, where survivors said they were subject to communist indoctrination, forced to eat pork and learn Mandarin (a language not native to Xinjiang), and worship Chinese dictator Xi Jinping. Some said they experienced beatings and electroshock torture, others, that officials sterilized them without consent, forced abortions on them, or killed their children. Some survivors have testified to experiencing medical testing consistent with organ harvesting.

By mid-2020, estimates for the number of people trapped in China’s concentration camp system had decreased to up to two million as reports circulated of Beijing forcing crowds of victims into buses and shipping them to factories nationwide to engage in forced labor.

Pakistani citizens have suffered as a result of this policy. Police have arrested alleged criminals with ties to China in the country on charges of illegal organ trading. Some of the few survivors of the camps are spouses of Pakistani citizens; Uyghur-Pakistani marriages are not uncommon given the proximity of Pakistan to Xinjiang.

The World Uyghur Congress condemned Yusuf’s denial of the human rights crimes China is committing as “shameful” on Thursday.

“History will remember those who dismissed the suffering of millions,” the group added on its Twitter account.

Pakistan will join the United Nations Human Rights Council in 2021. Winning a seat on the council last week, Khan vowed to use the position to “stand resolute against Islamophobia.”

At his speech at the U.N. General Assembly in September, Khan used the position to call for a global ban on “Islamophobia.”

“We stress that willful provocations and incitement to hate and violence must be universally outlawed,” Khan said. “This Assembly should declare an ‘International Day to Combat Islamophobia’ and build a resilient coalition to fight this scourge.”

Khan did not identify the extermination of Muslim ethnic minorities in China as part of the “scourge,” opting, instead, to use cartoons in the French satirical magazine Charlie Hebdo as an example.

China and Pakistan are deeply economically intertwined, primarily through China’s Belt and Road Initiative (BRI), a global scheme to dominate the world’s transportation infrastructure. The BRI aspires to reconstruct the Ancient Silk Road, a trade route connecting China to Europe in which the territory now known as Pakistan is key for transit.