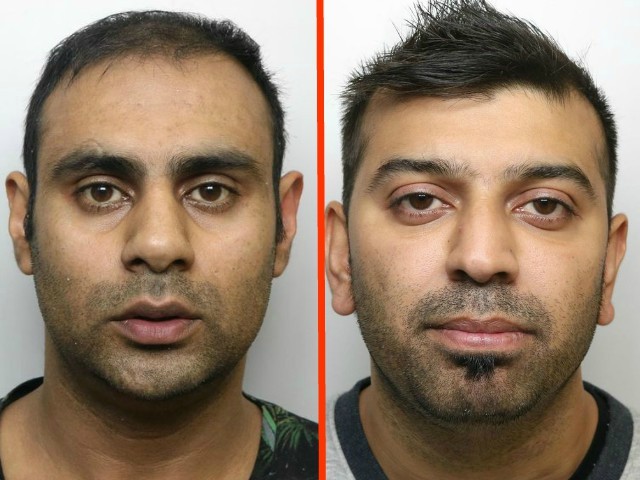 The mother of a Huddersfield grooming gang victim said her daughter’s rapist told her the police “won’t touch me, they don’t like us P***s”.

The mother of ‘Girl L’ told the Huddersfield Examiner that she had struggled to get West Yorkshire Police to take her complaints of grooming and abuse against her daughter seriously, and several times told the rapists to stay away from her daughter.

On one occasion, she said she told Irfan Ahmed (also known as ‘Finny’, pictured above, left) on the telephone: “I’ve reported you to the police for child sexual exploitation.”

“I would speak to them and then they’d threaten me,” she explained, and went on to describe how pleas to the police were ignored.

“We were passing all this information on and all they would say is ‘we’re building up intelligence’ and this went on for years,” she said, and added that “I believe that we were told that they weren’t going to do anything about it.”

When asked why she thought police were not actively investigating child sexual exploitation by the gang, who are majority Pakistani-Muslim, she said: “I think being in fear of being called racist. I think that’s got a lot to do with it.”

A spokesman for West Yorkshire Police denied the accusations that political correctness had hampered investigations into the child rapes, but the pattern of authorities fearing accusations of racism from the mainly Pakistani-Muslim rapists echoes that found in other towns plagued by grooming gang scandals such as in Rotherham, Rochdale, and Telford.

Girl L’s mother also said that her daughter no longer feels safe knowing that one of the 20 convicted Huddersfield child predators is still on the run.

Sajid Hussain (known as ‘Fish’, pictured above, right) absconded from the country while out on bail during the jury’s deliberation.

Hussain was found guilty at Leeds Crown Court last month of two counts of rape (against another victim, identified as ‘Girl A’) and sentenced to 17 years in prison in his absence.

Although he had to surrender his passport as part of his bail conditions, it is believed that Hussain has left the country.

Saying that her daughter was now too frightened to return home, Girl L’s mother told ExaminerLive: “Not long after the sentencing, the police removed her panic alarms even though Sajid is on the run and she’s worried as she gave evidence against him.”

West Yorkshire Police confirmed to Breitbart London that despite Sajid Hussain breaching terms of his bail and being on trial for rape, they were prevented from making a public appeal for his whereabouts after he absconded because of reporting restrictions at the time of the active trial.

The Huddersfield grooming gang trials, where 20 men were convicted for the systemic abuse, grooming, rape, and sex trafficking of 15 vulnerable, white girls — aged between 11 to 17 — were under a blanket media ban, resulting in citizen journalist and activist Tommy Robinson being jailed for contempt of court after he livestreamed outside one trial at Leeds Crown Court in May.

Robinson’s case has been referred to the Attorney General after his original conviction and imprisonment was overturned when an appeals court determined that the speed with which the original conviction was made “gave rise to unfairness”. Robinson was released from his previous bail conditions Monday.