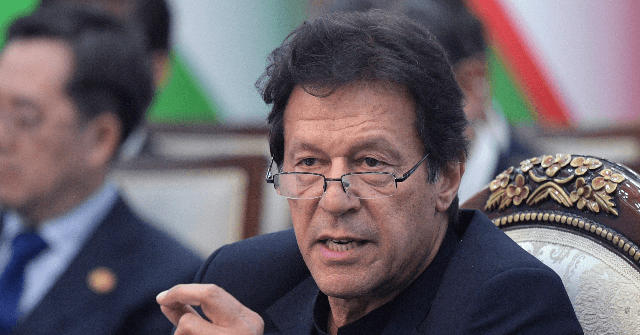 The former cricketer, elected prime minister last July, will be visiting Washington at the invitation of President Trump, a Foreign Ministry spokesperson told reporters, in his first foreign visit to the United States as the country’s leader. The focus of the visit will be on improving bilateral relations, the spokesperson added.

Last month, Foreign Minister Shah Mehmood Qureshi told reporters Khan had temporarily declined an invitation from Trump because he had to attend his parliament’s budget session. He added that any meeting would focus on “important regional matters,” given that Pakistan is facilitating ongoing U.S. peace talks with the Islamist terror group the Taliban.

Relations between the two countries have been strained in recent years. Many Washington foreign ministry officials have been highly critical of the Pakistani government’s tolerance towards Islamist terror groups, as well as the widespread persecution of the country’s Christian minority.

This week, the State Department designated the Balo­chistan Liberation Army (BLA) as a global terrorist group, accusing them of activity “that threatens the national security of the United States. ”

Addressing his cabinet in January, Trump said that he wanted “to have a great relationship with Pakistan,” but warned that “they house … and take care of the enemy.”

“We just can’t do that. So, I look forward to meeting with the folks from — and the new leadership in Pakistan, we’ll be doing that in the not-too-distant future,” he said at the time.

Last year, Trump cut off $300 million in military aid to Islamabad, accusing the country’s previous administration of lying and providing a safe haven for terrorists.

“The United States has foolishly given Pakistan more than 33 billion dollars in aid over the last 15 years, and they have given us nothing but lies & deceit, thinking of our leaders as fools,” he wrote on Twitter. “They give safe haven to the terrorists we hunt in Afghanistan, with little help. No more!”

The United States has foolishly given Pakistan more than 33 billion dollars in aid over the last 15 years, and they have given us nothing but lies & deceit, thinking of our leaders as fools. They give safe haven to the terrorists we hunt in Afghanistan, with little help. No more!

Last December, Imran Khan argued that he did not want his country to be treated “like a hired gun” by the U.S. in their ongoing war on terror.

“I would never want to have a relationship where Pakistan is treated like a hired gun — given money to fight someone else’s war. We should never put ourselves in this position again,” he told the Washington Post. “It not only cost us human lives, [the] devastation of our tribal areas, but it also cost us our dignity.”

Khan also dismissed claims by the State Department that his country serves as a sanctuary for terrorist groups in Afghanistan.

“When I came into power, I got a complete briefing from the security forces,” he said. “They said that we have time and time again asked the Americans, ‘Can you tell us where the sanctuaries are, and we will go after them?’ There are no sanctuaries in Pakistan.”