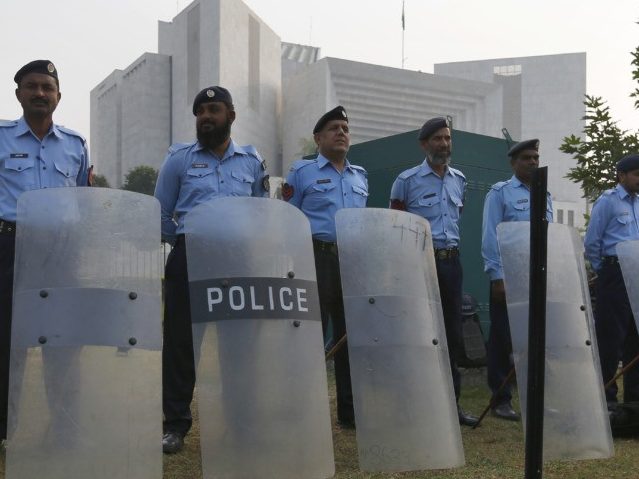 Pakistani Prime Minister Imran Khan chaired an emergency meeting focused on “law and order” Thursday amid widespread protests over the recent acquittal of Christian mother Asia Bibi sentenced to death by a court in the country on “blasphemy” charges.

Referring to the meeting of Pakistan’s federal cabinet on Thursday, Pakistan Today reports:

The cabinet discussed the overall law and order situation in the country arising out of the Supreme Court’s (SC) verdict in the Aasiya Bibi blasphemy case. Roads have been blocked, and educational institutes have been closed as protests by Tehreek-e-Labbaik Pakistan (TLP) workers against the verdict have paralyzed daily life in various cities of the country.

The meeting came a day after Prime Minister Imran Khan issued a stark warning to Islamists that have been threatening violence over the Pakistani Supreme Court verdict to acquit Bibi.

Addressing the protesters — linked to the Islamist TLP party that rose to prominence during the recent elections by campaigning on punishing blasphemy — PM Khan cautioned on Wednesday:

I appeal to these elements … do not clash with the state. I appeal to you, don’t harm this country in order to [increase your] vote bank. If you continue doing this… let me make it clear to you … the state will fulfil its duty [and] protect people’s properties and lives. We will not allow any vandalism [or] blockage of traffic. I appeal to you… do not take the state to a point where it has no option but to take action.

Nevertheless, thousands of protestors ignored the PM’s warnings and took to the streets on Thursday.

Thousands of far-right religious demonstrators continue to block major roads across Pakistan in protest against the acquittal of a Christian woman in a high-profile blasphemy case.

The Tehreek-e-Labbaik Pakistan (TLP) political party, led by firebrand Muslim leader Khadim Rizvi, organized rallies in cities across the South Asian country on Thursday, despite a warning from Prime Minister Imran Khan not to “force the government to have to take action”.

Protests have been raging across Pakistan since shortly after the country’s supreme court decision to rescind Bibi’s 2010 death row verdict on Wednesday. Bibi, a Christian mother of five, was on death row for eight years.

TLP-linked protesters have threatened to kill Bibi and judges who acquitted her.

On Thursday, Pakistan’s Information Minister Fawad Chaudhry indicated that Islamabad was avoiding the use of force against protestors to resolve the issue peacefully.

Human rights group have determined that some Muslims repeatedly use Pakistan’s blasphemy laws to settle personal vendettas against Christians and other religious minorities across the country, where authorities have arrested dozens of people for allegedly insulting Islam.

Punishments for blasphemy can include a fine or a prison term, depending on the nature of the offense.

Although Pakistan has sentenced offenders to death under the law, Pakistan has yet to execute anyone for committing blasphemy.

However, radicals are known to take the law into their own hands have killed dozens following blasphemy accusations.

According to a count by Al Jazeera, “at least 74 people have been killed in violence related to blasphemy allegations since 1990.”