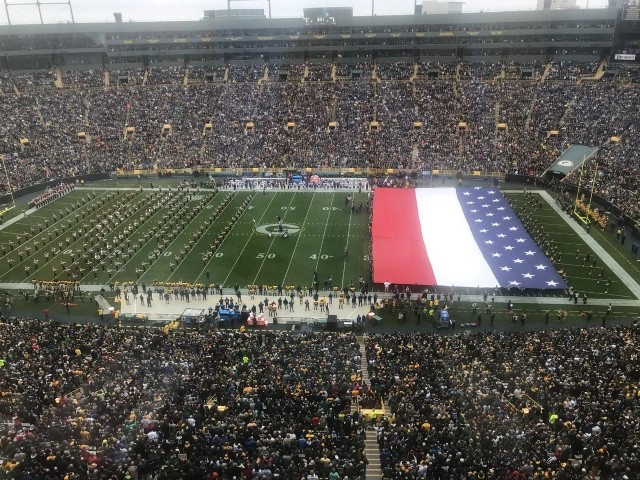 As Sunday’s Green Bay Packers game kicked off, fans were perplexed when a stylized version of the American flag that looks more like decorative bunting, than our actual national flag, was paraded out onto the field for a pre-game ceremony.

The strange banner caused ESPN’s Rob Demovsky to remark, “Not sure what country today’s Packers-Bills game is being played in but that’s not my flag.”

Not sure what country today’s Packers-Bills game is being played in but that’s not my flag pic.twitter.com/XGsk75sPsM

Others were just as confused as Demovsky.

Who comes up with ideas like this? Number of stars (States in Union) and number of stripes (colonies that won our independence) defines us. That thing on the field is not our nation’s banner.

in honor of the Euros winning the Ryder Cup?

The odd vexillological display brought many fans to wonder if they should stand or take a knee for the weird banner.

Do we stand or take a knee?

The giant display at the game reminds one of the US-themed bunting seen at political rallies, or patriotic ceremonies, but it certainly isn’t an American flag.

Just put up the US flag bunting! First time ever for a soccer match. #USMNT pic.twitter.com/gDHKK7daoi