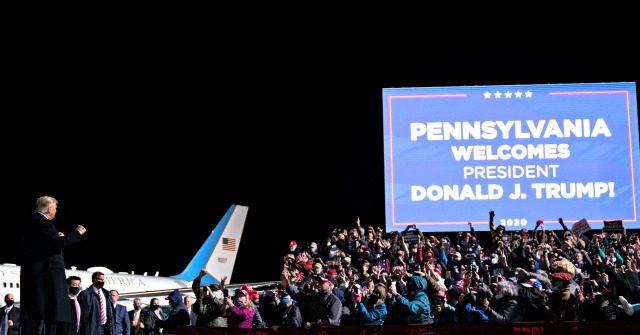 President Donald Trump debuted a new feature at his campaign rally in Erie, Pennsylvania on Tuesday.

“Take a look at this clip. We had it made up, and I think you’ll like it. First time I’ve ever done it,” Trump said.The president played a highlight video of Biden and his running mate, Kamala Harris, criticizing fossil fuels and talking about ending fracking during the Democrat primary.

The video was aired on a giant screen set up at the rally location.

Since winning the Democrat primary, the former vice president pivoted in August, telling Pennsylvania voters that he would not ban fracking.

The president then talked about the newly revealed Hunter Biden emails recovered from a laptop and published by the New York Post.

“But right now he’s got bigger problems than fracking, I think,” he said. “You know what it’s called? It’s called the laptop from hell.”