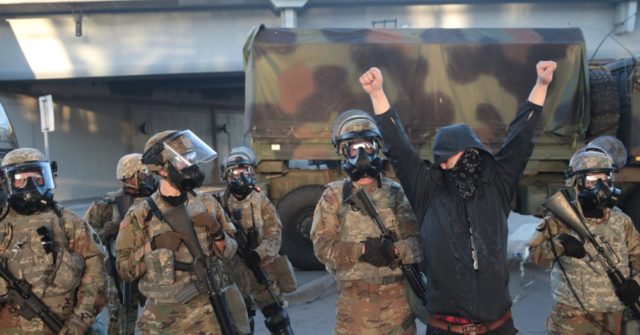 The governor of Minnesota and at least 12 others plus the District of Columbia have now activated the National Guard amid ongoing rioting and looting sweeping the nation triggered by the death earlier this week of a black man, George Floyd, while in police custody.

On Friday, Maj. Gen. Jon Jensen, the adjutant general of the Minnesota National Guard, told reporters the guardsmen are only providing support to law enforcement and are not authorized to make any arrests under their rules of engagement.

As of early Saturday, the governors in at least 13 states — Minnesota, Nevada, Georgia, Texas, Missouri, Utah, Ohio, Washington, Tennessee, Kentucky, Wisconsin, Colorado, and California— had activated the National Guard to help law enforcement officials quell protests that have erupted into riots in many cities.

Based on circumstances going on in Reno and at the request of local leaders, I have activated members of the @nvnationalguard to secure government buildings.

After numerous discussions with state and local leaders, I have signed an order authorizing the activation of up to 3,000 National Guard troops statewide ahead of several planned protests on Sunday, May 31. (1/2)

Today I signed Executive Order 20-11 to declare that a State of Emergency exists in Missouri due to civil unrest. The Missouri National Guard and the Missouri Highway Patrol stand ready to support local authorities.

We condemn violence and looting. I have activated the National Guard to help control the escalating situation in downtown Salt Lake City. I once again call on all who are protesting to do so peacefully.

Following a request from @CityofCleveland and @ClevelandPolice this evening, I have activated the @OHNationalGuard to assist in responding to incidents of violence during demonstrations within the city.

At the request of @CityofSeattle I have activated 200 members of the @WANationalGuard to help protect against property damage and manage crowds and traffic in downtown Seattle. They will be unarmed and work under the city’s leadership. https://t.co/vCdbHzHA1h

At the request of Mayor Cooper, I am authorizing the National Guard to mobilize in response to protests that have now taken a violent, unlawful turn in Nashville.

Although about half of the governors did not say how many National Guards troops they have mobilized, Breitbart News determined state leaders have activated around 17,000.

Of the 15,000, Minnesota Gov. Tim Walz activated all of the state’s guardsmen (about 13,200) in case all of them were needed. By the end of Saturday, the Minnesota National Guard planned to have 3,200 guardsmen activated to provide support to Minneapolis law enforcement, noting that additional troops would be called upon in coming days.

More than 1,000 additional Citizen-Soldiers and Airmen are activating today. This is in addition to the 700 that were on duty as of late last night. This represents the largest domestic deployment in the Minnesota’s National Guard’s 164-year history. pic.twitter.com/aV9NOFv5uo

Gov. Walz indicated he would only use the National Guard after the Pentagon offered help, placing a small number of U.S. Army units on standby to deploy to Minneapolis if necessary.

Violence intensified during the protests on Saturday night into Sunday morning despite curfews and the presence of the National Guard in cities across America, including Seattle (200 troops), Atlanta (3,000), Los Angeles (500-700), and Louisville (350).

Several U.S. governors have also declared a state of emergency over the widespread rioting and looting.

Demonstrations began in the Twin Cities after the death of Floyd, an unarmed man, while in Minneapolis police custody on Monday. Protests have since spilled into several cities across the United States.