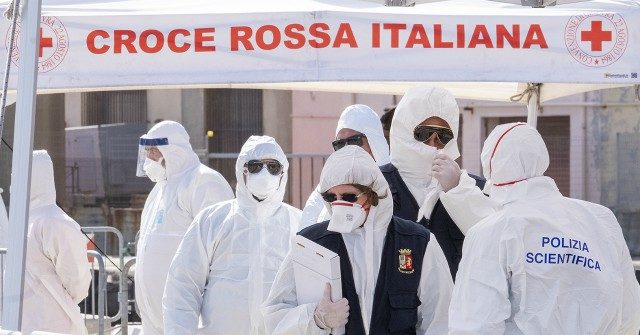 An estimated 134 migrants that the leftist government had relocated to a reception centre in northern Italy have tested positive for the Wuhan coronavirus.

The large coronavirus outbreak was reported in former barracks that have been converted into a migrant reception centre in the city of Treviso. A total of 134 out of 293 migrants tested positive for the virus.

Governor of Veneto Luca Zaia confirmed the cases this week, saying in comments reported by Il Giornale on Thursday: “There are more than 130, probably 134, positive migrants in the former Serena Barracks.”

28 Migrants Test Positive for Coronavirus After Being Brought to Italy by NGO https://t.co/4gzQyhFdwL

The screening was prompted on Tuesday when one of the migrants fell ill and later tested positive for the Chinese virus. Tests were then extended to all the residents of the reception centre.

Just over a month ago, a Pakistani migrant living at the facility tested positive for the virus and was placed in solitary confinement for four days. He had allegedly initially hidden his symptoms by taking ibuprofen.

The new large number of coronavirus cases come as Italy has seen a surge in migrants arriving in the country, primarily from North Africa.

Former Italian Interior Minister Matteo Salvini slammed the government earlier this week on the risk of a fresh wave of coronavirus inspections that could be sparked by the high number of migrant arrivals.

“Landings have tripled since last year, with illegal immigrants being recovered even near Maltese waters, while Lampedusa is collapsing and hundreds of immigrants flee the reception centres who risk spreading Covid-19,” Salvini said.

The island of Lampedusa in the Mediterranean has been particularly overwhelmed, with arrivals of migrants becoming so frequent that it has been claimed that a new boat containing more migrants arrives every hour on average.

“The situation has become uncontrollable. If the government doesn’t, I’ll declare a state of emergency,” the mayor of Lampedusa Totò Martello said.