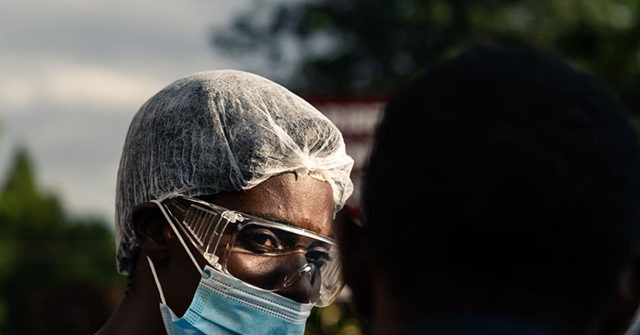 Photos and videos of Zimbabwean health workers wearing bedsheets as personal protective equipment (PPE) amid a shortage of Wuhan coronavirus medical supplies have outraged locals, Zimbabwe’s Pindula News reported on Friday, who are demanding the government come to their aid.

A photo of nurses wearing bedsheets in place of personal protective equipment (PPE) at the nation’s largest hospital has gone viral throughout Zimbabwe social media this week. According to Pindula, the picture was taken at Parirenyatwa General Hospital, Zimbabwe’s largest medical center located in the capital, Harare.

These are nurses at Zimbabwe’s BIGGEST hospital, Parirenyatwa, wearing BEDSHEETS as an alternative form of Personal Protective Equipment.

This is in a country where a company close to the President has LOOTED BILLIONS of dollars, yet Mnangagwa can’t provide PPE.

Many citizens have criticized the national government for failing to provide frontline healthcare workers with basic supplies as the country fights to contain its coronavirus outbreak. In response, Zimbabwean nurses at public health facilities have been resigning en masse, according to the report.

Zimbabwean health workers anticipated this shortage. In April, the Zimbabwe Association for Doctors for Human Rights (ZADHR) sued the national government for its failure to provide hospitals with sufficient PPE amid the country’s coronavirus outbreak, a move doctors hoped would spur authorities into action.

Prior to the lawsuit, in March, doctors and nurses in Zimbabwe went on strike to protest the lack of PPE. They also did this at the end of last year, prior to the coronavirus pandemic, to demand better wages.

“Huawei and Sichuan PD Times donated 50,000 medical surgical masks, 510 protective suits, and 1,000 pairs of medical goggles to Angel of Hope Foundation. These medical supplies will be distributed to medical workers on the frontline against COVID-19 [Wuhan coronavirus] in Zimbabwe,” Beijing announced in a statement shared by state-run news agency Xinhua.

“The donated supplies were brought to Harare from Beijing by a charter plane of Air Zimbabwe on [April 21],” the statement said.

Angel of Hope is the first lady’s foundation. Zimbabweans criticized China for donating the supplies to Mnangagwa directly rather than to the country’s public health ministry. Zimbabwean lawyer Alex Magaisa said that to give Mnangagwa PPE when it was urgently needed by frontline workers was a callous move, as it caused delays in distribution to public health facilities.

“Now they [Chinese companies] come through a non-state actor [the foundation] when the state entities exist … We can see through the veil,” the lawyer said.

Magaisa argues that the donation was merely a political act to generate positive publicity for China and to flatter Zimbabwe’s president, Emmerson Mnangagwa, and his ruling party.

The photos of Zimbabwean nurses wearing bedsheets as PPE this week, nearly a month after China’s donated PPE allegedly landed in Harare, appear to support Magaisa’s doubts that the PPE would actually reach public hospitals.

At press time on Friday, Zimbabwe had recorded 42 infections and 4 deaths from the Wuhan coronavirus.