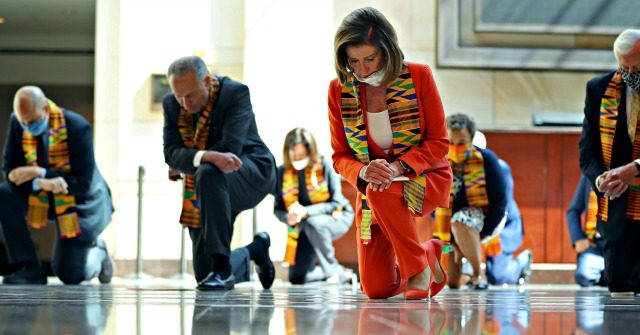 Democrat lawmakers, led by House Speaker Nancy Pelosi (D-CA), are facing overwhelming backlash after opting to wear Kente cloth during their nearly nine-minute moment of silence in a show against police brutality. Many users across social media questioned their motives and blasted them for missing the mark.

Pelosi and fellow Democrat lawmakers, including Sens. Kamala Harris (D-CA), Cory Booker (D-NJ), and Chuck Schumer (D-NY), took a knee on Monday for eight minutes and 46 seconds as a show of solidarity with Americans protesting police brutality and remembering those who have died, including George Floyd, Michael Brown, and Trayvon Martin. Democrats could be seen kneeling in unison, with most wearing Kente cloth — a special fabric with deep and meaningful origins rooted in West Africa — in a seeming attempt to show further solidarity with the black community. Their attempt, however, appeared to many to fall flat.

“There is more Kente fabric in this picture than at a Ghanaian traditional wedding,” pro-life activist Obianuju Ekeocha said.

“The DC African-fabric shop is probably now sold out in order to meet the demand of this ridiculous tokenism by Democrat politicians. Dear Africans step aside! #CulturalAppropriation at its worst,” she continued, blasting Democrats for glossing over the importance of the fabric with the Ghanaian identity, specifically:

I’m suresomeone told them that fabric represents black people but in truth a Nigerian like me cannot lay claim to this significant fabric which is very much a part of Ghanaian identity.

Dear democrats,these colors & patterns belong to ancient tribes and mean something to us. pic.twitter.com/nuB1RPBtQA

“Excuse me dear Democrats in your tokenism you didn’t wait to find out that this thing that you’re hanging around your neck is not just some African uniform,” she continued in a video response. “These fabrics … they all mean something to us”:

I had to say something about the American politicians shameless and ignorantly using the Kente fabric as a prop in their virtue signaling.

“The Democrats have no interest in black America. These fools think that because they put some Kente cloth on they’re going to get the black vote?” Errol Webber, Republican candidate for California’s 37th congressional district, said in part:

The Democrats have no interest in black America.

These fools think that because they put some Kente cloth on they’re going to get the black vote?

I’m waiting on Biden to put a durag on and start saying the “N” word.

As Congressmembers ice their knees and put away their kente cloth graduation stolls, I hope they consider supporting a monthly stimulus check. https://t.co/u1WAhukMdY pic.twitter.com/s4WwgCQ3wk

“I still can’t wrap my mind around the fact that they draped these white people in kente cloth to ‘honor’ him,” Joseph said in another tweet. “This has to be hell.”

I still can’t wrap my mind around the fact that they draped these white people in kente cloth to “honor” him.

This has to be hell.

Backlash continued to roll in, and it was both swift and severe:

This is too much to wake up to

Is that kente cloth they’re wearing ? … is this supposed to drive in the message “ we care for the blacks” What in the hell?…trying not to laugh but this is sending me. pic.twitter.com/uc7vHVMHAD

How wild to think this is what anyone wants. Hang up the kente cloth write laws and defund the police. https://t.co/tc0t3TZxMH

Be honest, if I showed up in DC wearing a Kente cloth, you’d rightfully boo me out of the city.pic.twitter.com/v4veAKXKGX

Who was intern that said, “You know what’ll drill home the point? KENTE CLOTH.” https://t.co/jTmoLeyKhl

And really fuck the Kente cloth, when does this legislation get voted on?

The Lynching Bill still has not passed btw

It’s performative activism because they never took a knee three years ago when it was controversial and had actual consequences. They do it now because they think it’s trendy—hence the Kente cloth.

they literally dressed up as a meme.

I would like to see the email thread that lead to the Democrats showing up to Capitol Hill in Kente cloth.

How is this pandering Democrats draping themselves in the Kente cloth not defined as cultural appropriation by every single standard of the modern left? pic.twitter.com/XBgrllaKHf

How is it not “cultural appropriation” for Nancy Pelosi, Chuck Schumer, & Jerrold Nadler to show up to the Capitol wearing West African “Kente Cloth”

Can you imagine if a Republican showed up in this for a publicity stunt?

As described by ThoughtCo:

Although kente cloth is now identified with the Akan people in West Africa, and particularly the Asante Kingdom, the term originates from the neighboring Fante. Kente cloth is closely related to Adinkra cloth, which has symbols stenciled into cloth and is associated with mourning.​

As one of the prominent symbols of African arts and culture, Kente cloth has been embraced by the broader African diaspora (which means people of African descent wherever they might live.) Kente cloth is particularly popular in the United States among African-Americans and can be found on all types of clothing, accessories, and objects. These designs replicate registered Kente designs, but are often mass-produced outside of Ghana with no recognition or payment going to the Akan craftsmen and designers, which Boatema Boateng has argued represents a significant loss of income to Ghana.

The Ultimate History Project also emphasized Kente cloth’s history with the Ashanti people, which is “strongly tied to the history of the slave trade”:

Pelosi spoke ahead of the collective moment of silence on Monday as Democrats gathered in Emancipation Hall at the U.S. Capitol.

“That tragedy, that hour of history … slavery in our own country and then all the consequences of that — we are here to observe that pain,” Pelosi said as the Kente cloth draped around her neck.

“We are here to respect the actions of the American people to speak out against that, specifically manifested in police brutality,” she added ahead of their moment of silence, struggling to stand back up as it concluded:

Democrats on Monday unveiled their latest police reform bill, the Justice in Policing Act, which bans chokeholds, no-knock warrants, and includes a racial bias training program, among other reforms.