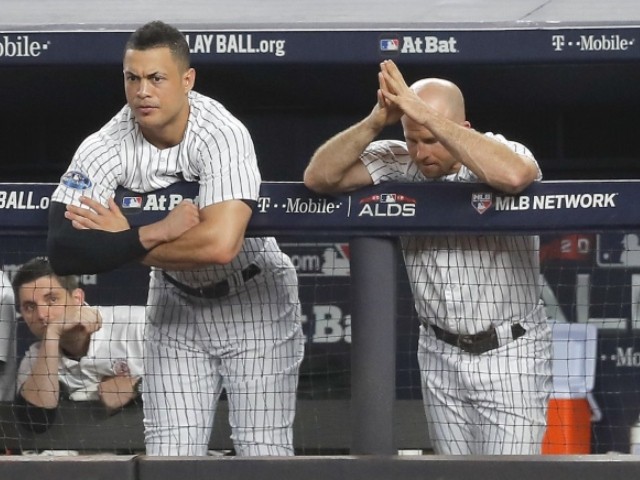 NEW YORK (AP) — Aaron Judge and the New York Yankees couldn’t wait to get back home.

CC Sabathia became the latest pitcher to put New York in an early hole as rookie manager Aaron Boone again stuck with his starter too long, and the Yankees fell just short of extending their season Tuesday night with a 4-3 loss to the rival Boston Red Sox in Game 4 of their AL Division Series.

“That’s the one team that you don’t want to lose to,” outfielder Brett Gardner said. “We hate losing to them and we love beating them. Obviously, they just had our number this year.”

New York mounted a last-ditch rally against wild closer Craig Kimbrel, scoring twice in the ninth inning . But the Yankees’ comeback stalled when Gary Sanchez’s bases-loaded sacrifice fly was caught on the left-field warning track , and rookie Gleyber Torres grounded out with two on to end it — sort of.

The play at first base was close, so both teams and a sellout crowd held their breath during a dramatic replay reviewbefore the out call was upheld following a 63-second delay. Kimbrel and the Red Sox — suspended in mid-celebration for a minute — resumed bouncing around in excitement.

“We played a really hard season, we managed to win 100 games and then we get to this point and we just can’t finish off a series against the Red Sox. It’s tough,” reliever David Robertson said.

Asked about his long fly, Sanchez said through a translator: “I wasn’t sure about it. I hit it well, but I got under it.”

After beating Oakland in the AL wild-card game, it was a humbling playoff exit for a power-packed Yankees team that added reigning NL MVP Giancarlo Stanton last offseason and hit a major league-record 267 home runs.

With the stakes at their highest, however, the Yankees never left the yard in two home games versus Boston. They were outscored 20-4 as the AL East champs took the best-of-five series 3-1 and advanced to the ALCS against defending World Series champion Houston.

“I didn’t expect to come here and lose two in a row. I expected to come back here and win two in a row,” Gardner said.

Last year, it was the Yankees who reached the AL Championship Series before their surprising run ended with a Game 7 loss to the Astros.

This time, a 2018 season that began with sky-high expectations — now over in bitter disappointment.

While the Red Sox got strong starts from Chris Sale, Nathan Eovaldi and Rick Porcello during the series, Yankees starters were charged with 15 runs over 13 innings in four games. Masahiro Tanaka was the only one to get an out in the fourth.

Adding to the humiliation, the Red Sox got to revel in a second champagne celebration at Yankee Stadium in less than three weeks.

“They got momentum on their side and never really slowed down,” Robertson said.

So while the Red Sox roll on seeking their fourth World Series title in 15 years, the Yankees own but one pennant and championship during that span (2009).

On deck, a long winter of wondering how they’ve fallen behind in a rivalry they dominated for nearly a century.

All that changed in 2004, when Mariano Rivera was finally unable to close out the pesky Red Sox and they rallied for an unprecedented comeback from a 3-0 deficit to win the ALCS. Boston took Games 6 and 7 at Yankee Stadium on the way to its first World Series championship in 86 years.

This was the first playoff meeting between the clubs since then, and the Red Sox once again made themselves right at home in the Bronx. After splitting two games at Fenway Park, they quieted the Yankees’ boisterous crowd — and their dangerous bats. New York hadn’t gone consecutive games at Yankee Stadium without a home run since April.

“Definitely frustrating,” Boone said. “I think one of their goals in this series was to keep us in the ballpark, and then coming here where we’re so good at that, they were able to do it. Credit to them for being able to hold us down and shut us down, but in the end, you don’t move on usually when you can’t get enough big hits in a series, and they just outplayed us a little bit.”

Before the last two games, New York was 7-0 at home over the past two postseasons.

Confident players were excited about returning to the Big Apple, and Judge even walked past Boston’s clubhouse inside Fenway Park early Sunday morning with Frank Sinatra’s rendition of “New York, New York” blaring from a boom box.

“It’s a good song. And Aaron, he’s one of our resident deejays, so he’s got a pretty extensive playlist,” Boone said later that day at Yankee Stadium, a smirk filling his face. “We like to hear that song sometimes when we win a big game.”

That was the last time they did.

Boston’s 16-1 blowout Monday marked the most lopsided defeat for a home team in postseason history, and shortstop Didi Gregorius called it “an embarrassing day.”

Boone acknowledged some regret in allowing ace Luis Severino to start the fourth inning down 3-0. Severino was removed with the bases loaded and nobody out, but relievers Lance Lynn and Chad Green quickly let the game get out of hand.

The next night, after 1978 Boston nemesis Bucky Dent threw out the first pitch , Boone stayed with Sabathia even when the 38-year-old lefty, pitching on 11 days’ rest, ran into trouble in the third . By the time the inning was over, the Red Sox had a 3-0 lead they never relinquished.

“I was fine with the way CC was throwing the ball,” Boone said. “I think it was a sound decision.”

Zach Britton gave up an opposite-field homer to No. 9 batter Christian Vazquez in the fourth, and New York never fully recovered.

“They’ve got a great team over there. They won 108 games,” Judge said. “They’re one of the most potent offenses in the game and it was a battle back and forth.”