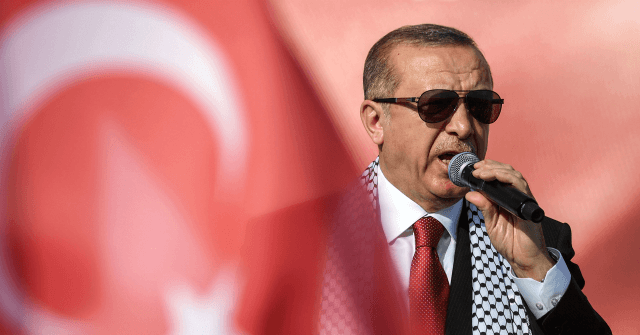 Turkish President Recep Tayyip Erdoğan has warned the world Jerusalem “belongs” to Turkey, harking back to the Ottoman Empire’s control over the city for hundreds of years up until it was ejected in 1917.

Erdogan made his public claim Thursday as he addressed Turkish lawmakers during a major policy speech in Ankara. He said:

In this city that we had to leave in tears during the First World War, it is still possible to come across traces of the Ottoman resistance. So Jerusalem is our city, a city from us. Our first qibla [direction of prayer in Islam] al-Aqsa and the Dome of the Rock in Jerusalem are the symbolic mosques of our faith. In addition, this city is home to the holy places of Christianity and Judaism.

As the Times of Israel reported, the Ottoman Empire ruled Jerusalem from 1516 to 1917. Modern Turkey, its successor state, has long claimed a connection to the holy city, regularly condemning Israel for alleged attemtps to “Judaize” it and the U.S. administration’s December 2017 recognition of it as Israel’s capital.

Turkey’s claim to ownership and an Islamic proprietary interest in the city defies thousands of years of accepted wisdom that confirms some of Judaism’s holiest sites are located in the West Bank and eastern Jerusalem.

These include the Temple Mount and Western Wall in Jerusalem; the Tomb of the Patriarchs and Matriarchs in Hebron; and Joseph’s Tomb in Nablus.

That did not stop Erdoğan during his lengthy speech to the Turkish parliament lamenting the fate of Jerusalem and Palestinians and reaffirming his embrace of Hamas, the Islamist group that controls the Gaza Strip, and is deemed a terrorist group by Israel, the E.U. and the U.S.

President @RTErdogan: “We consider it an honour on behalf of our country and nation to express the rights of the oppressed Palestinian people on every platform, with whom we have lived for centuries.” pic.twitter.com/yCcfrrc5RY

“Another crisis that our country and our nation carefully follow is the oppression of Israel against the Palestinians and the indifferent practices that disregard the privacy of Jerusalem,” he said toward the end of his address.

“The issue of Jerusalem is not an ordinary geopolitical problem for us. First of all, the current physical appearance of the Old City, which is the heart of Jerusalem, was built by Suleiman the Magnificent, with its walls, bazaar, and many buildings. Our ancestors showed their respect for centuries by keeping this city in high esteem.”

The Palestinian people have been living in the holy city “for thousands of years,” but they were occupied and had their rights violated, the Turkish leader further alleged, as the Times reported.

Calls by Turkey for intervention in Israel are not new.

As Breitbart News reported, back in June Turkey’s top religious official vowed to continue Islam’s global struggle for dominance “until Jerusalem is completely free” and called on the Muslim world to rally against Israel.

“It is never possible for Muslims to give up on the blessed city,” President of Religious Affairs Ali Erbas said in Turkish-language comments carried by T24 media and translated by the Jerusalem Post.

According to Erbas, Israel and its capital share “universal value” for the Islamic world.

His views echo those of Turkey’s Foreign Minister Mevlut Cavusoglu who recently said, “The ummah [Islamic community] will never give up on a sovereign Palestinian state with Quds al-Sharif as its capital.”