Every tow truck company that has a municipal contract has refused to haul away the Freedom Convoy trucks that have blocked city streets in the Canadian capital for the past two weeks, Ottawa City Manager Steve Kanellakos said Tuesday.

Ottawa declared a state of emergency over the protests on Sunday, with Mayor Jim Watson describing the truckers and their supporters as a threat to the “safety and security of residents.”

The state of emergency led to speculation that Ottawa, and perhaps other city governments, might break up the protests by towing the trucks away.

Commentators with knowledge of the towing industry suggested its drivers might be reluctant to take action against their fellow truckers, and even if they did agree to haul away Freedom Convoy trucks, the process of towing big rigs is far more complex and time-consuming than towing private motor vehicles – especially if the truck driver does not cooperate.

Kanellakos said Ottawa has contracts with ten towing companies, covering everything from enforcement of parking regulations to rescuing city vehicles. 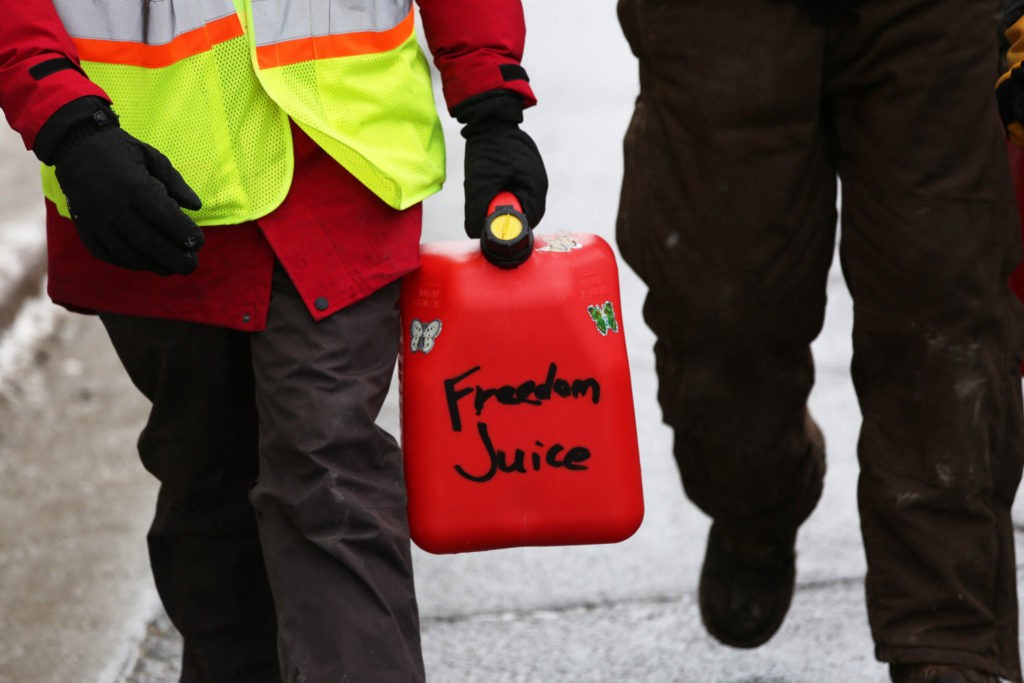 A person carries a fuel can on Wellington street as demonstrators continue to protest the Covid-19 vaccine mandates implemented by Prime Minister Justin Trudeau on February 9, 2022, in Ottawa, Canada. (DAVE CHAN/AFP via Getty Images)

“We’ve contacted them all and every one, they’re all refusing as of today to provide heavy tow truck work,” he said after briefing the city council on the situation. He added that the towing companies were still providing services for normal-sized vehicles. 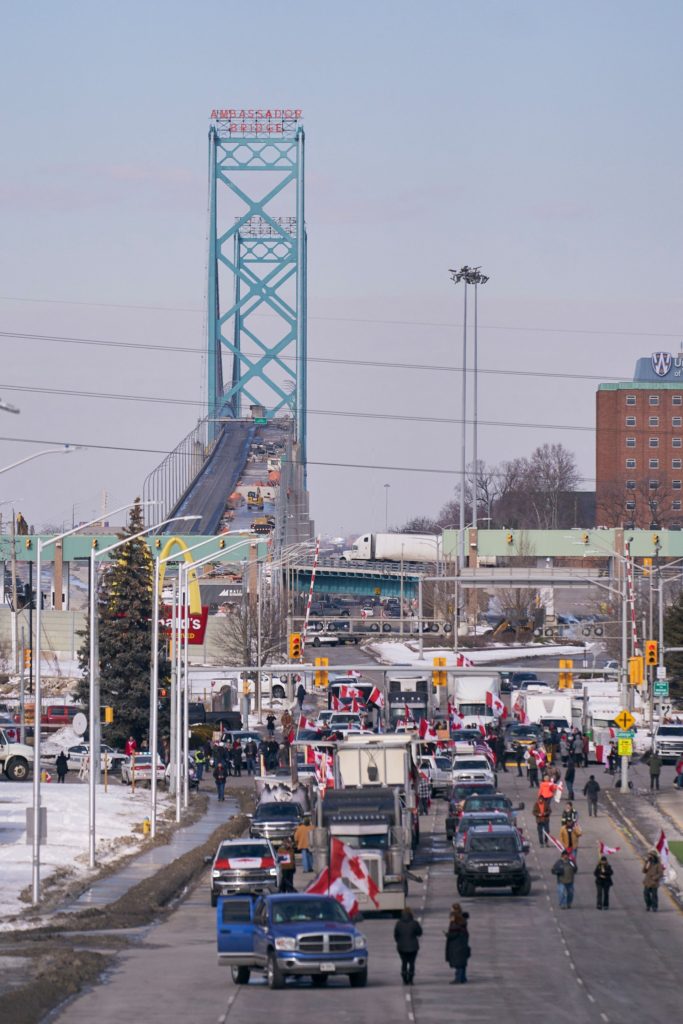 Covid-19 mandate protesters block the roadway at the Ambassador Bridge border crossing with the U.S., in Windsor, Ontario, on February 9, 2022. (GEOFF ROBINS/AFP via Getty Images)

A towing company CEO told the Globe and Mail he was concerned for the safety of his employees and future of his company if he instructed his drivers to intervene in the protests, because “nobody is going to have my back.”

A similar situation exists at the Coutts border crossing in Alberta, which has been blocked by protesting truckers, according to the Royal Canadian Mounted Police (RCMP).

“From the onset of this event, we actively engaged towing companies to assist. Unfortunately, they were unwilling to become involved when it was implied that helping law enforcement with removal would likely damage their livelihoods into the future,” said RCMP Deputy Commissioner Curtis Zablocki at a news conference on Tuesday.

Zablocki said it would be a severe “challenge” for the RCMP to move protesters’ trucks without the assistance of commercial towing services, since the police do not have access to the “heavy equipment” required. He said the RCMP has nevertheless been able to reduce the number of trucks blocking the Coutts crossing from 250 to about 50.

“They need to recognize that this protest is not lawful. We’re confident that charges will be laid,” he said.

Ottawa appears to be looking for a new angle to use against the Freedom Convoy truckers, as the Canadian Press on Tuesday quoted Deputy Police Chief Steve Bell noticing that “a quarter of the 418 trucks still camped out in the city’s downtown have children in them.”

“We’re concerned about access to sanitation, the ability to shower,” Bell said. “There’s a multitude of concerns. That’s why we’re raising it and identifying it as something that we need to address. We need to have discussions with our partners and the children’s aid society about how we manage moving ahead.”

This burst of concern for the children of protesters is a little difficult to reconcile with the current police strategy of pressuring the truckers to leave by denying them access to fuel, since trucks without fuel cannot run their heaters, and nighttime temperatures in Ottawa are projected to fall below zero over the weekend.

The fuel ban is not working well anyway, as the National Post on Tuesday reported hordes of protest supporters are marching around downtown Ottawa brandishing fuel containers that are either empty or filled with water, making it very difficult for the police to determine which containers might actually have fuel in them.

After the “fuel ban” it is now illegal to bring gas cans to the Freedom Convoy Peaceful Protest — here is what the streets of Ottawa looked like tonight.
God bless these people 🙏🏻😂 pic.twitter.com/kswVn4vtVS

“It does provide a layer of logistical complexity to us,” Deputy Police Chief Bell admitted.

At the same press conference, Bell said some of the protesters have removed the wheels from their vehicles, while truckers have employed various methods to “immobilize” their rigs, making the protest blockades hard to clear.