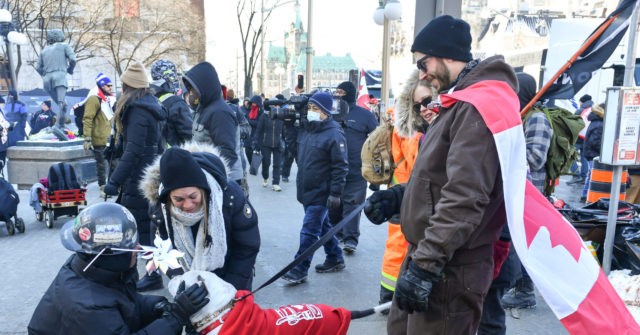 The city of Ottawa threatened in a statement Thursday to place the pets of Freedom Convoy protestors into “protective care” or possibly take them away permanently if their owners are arrested.

Ottawa By-Law, which enforces regulations made by the City of Ottawa, published a statement on Twitter Thursday indicating that animals of Freedom Convoy protestors could be taken into “protective care” if protestors are arrested by police.

“The Animal Care and Control By-law provides for temporary ‘protective care’ by the City of animals in the event that the owner is not available, under circumstances including eviction, incarceration, or fire or medical emergency,” the account later wrote.

Some replied to the post and questioned what would happen to the animals “relinquished” from their owners, while others accused the account of attempting to bully the protestors.

Breitbart News spoke briefly to an Ottawa City employee who stated that animals taken into care under normal circumstances are managed by the Ottawa Humane Society, a non-profit animal shelter.

While other branches of the Humane Society describe themselves as “no-kill” shelters, such as the Etobicoke Humane Society, a 2015 article on the Ottawa Humane Society website, written by Executive Director Bruce Roney, notes the shelter does euthanize animals.

“As an open admission shelter, the OHS accepts all animals at any time, no matter how old, sick, injured, and no matter what their behaviour or temperament. We are always here for them. That means those that are not treatable, rehabilitatable are humanely euthanized by caring professional staff who wish that they didn’t have to,” Roney wrote.

“So, is the OHS a no-kill shelter? I don’t know. It depends on which definition you subscribe to. But you won’t catch me or anyone else here using the term. I do know this: we are a no-suffering shelter,” he added.

Canadian banks will receive the names of people involved in “Freedom Convoy” protests that have descended on the nation’s capital, a first step in a financial crackdown on demonstrators being instituted by the far-left government of Justin Trudeau. https://t.co/GgrjPZ4wnu

The post from the Ottawa By-Law account comes just days after the government of Prime Minister Justin Trudeau stated that, under the Emergencies Act, protestors bringing children to the downtown Ottawa protest could face a $5,000 fine or five years in prison

The Children’s Aid Society of Ottawa also spoke out about the protests, warning parents that they should make arrangements for the care of their children if they are arrested by police.

“The Children’s Aid Society of Ottawa (CASO) is urging parents at the demonstration in Ottawa to make the necessary alternate care arrangements should they become unable to care for their children following potential police action,” the group said.

“If parents and children are separated following police efforts in ending the demonstration in the downtown core, CASO will work to reunite families as soon as possible,” they added.

Ottawa Mayor Jim Watson has also called on protestors with children to leave the area saying, “Using these kids as some kind of a shield or protection is absolutely reprehensible and irresponsible on the part of any parent. They should pack up and get their kids going back to school, back to their home provinces.”

Canada’s Justice Minister David Lametti has told Trump supporters who donated to the “Freedom Convoy” to be worried about accounts frozen. https://t.co/hEU8oQ4EUS