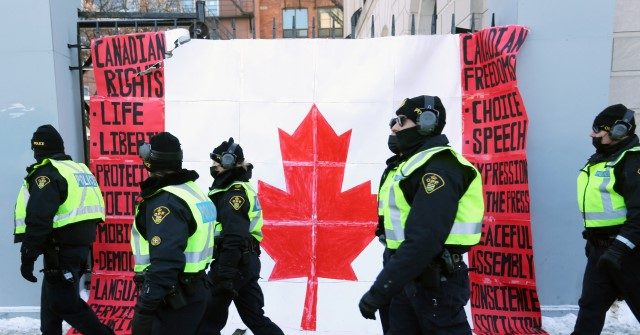 Ottawa police detained and brutalized a 78-year-old man identified as Gerry Charlebois on Monday for violating the ban imposed that day on honking car horns. Police appear in multiple videos twisting the elderly man’s arm around his back and shoving him into the side of a car.

The arrest took place amid attempts to crack down on a trucker-led protest in Canada’s capital dubbed the “Freedom Convoy” demanding an end to civil rights abuses by the Canadian government in the name of stopping the spread of Chinese coronavirus, including vaccine and mask mandates and business shutdowns. Over a week into the protest, the assembly has remained largely peaceful and manifested largely through incessant truck honking. A local court granted an injunction that bans any car honking in the city for ten days on Monday.

The images of police battering Carlebois are particularly striking given his small size – Carlebois’s family told the Toronto Sun on Monday that he is 4’10” – and the fact that the mandates the Freedom Convoy is protesting are ostensibly meant to protect people more vulnerable to severe coronavirus infections, like the elderly.

I spoke with him. He’s in pain. He’s 4 foot 10. A retired janitor with 11 grandkids, 4 great grandkids. If this disgraceful treatment of a 78 year old for honking his horn and a thumbs up to a trucker is acceptable to @JustinTrudeau @fordnation @JimWatsonOttawa no one is safe. https://t.co/DBgPLpCquX

Speaking to the Sun‘s Joe Warmington, Charlebois confirmed the incident and explained that he was not a protester or engaged in any disruptive activity. He is vaccinated. He has no criminal record and was “confused” as to why police would stop him for honking a horn; the court had just banned such an action within hours of the detention. Charlebois told Warmington that he wanted to go to the downtown neighborhood to “look at the trucks” but did not walk into the protest site specifically because he thought it may be dangerous. “I decided it was too much so I just looked from the van and then started to head home.”

In the time in which he was preparing to head home, a truck drove past, to which he offered “a thumbs up and a honk.” Police then battered him in response to the honk.

Warmington reported that Charlebois has suffered several cuts, bruises, and aches as a result of the attack. His sons, who also spoke to the Sun, said that Charlebois may need to visit the hospital to ensure that he does not have any long-term injuries, as he cannot move his arm properly and now has a “very messed-up shoulder.”

Police had not yet commented on the incident at press time.

I have put request to ⁦@OttawaPolice⁩ ⁦@JimWatsonOttawa⁩ ⁦@OPSChiefSloly⁩ To verify a video that shows an elderly man being taken to ground and handcuffed and taken away. Since I have not heard back I’m asking now publicly for verification. And for any witnesses pic.twitter.com/3iUBG9S4Mo

Ottawa police announced on Sunday, prior to the injunction passing, that authorities had arrested seven people within a 24-hour window and opened “over 60 criminal investigations” – small numbers given the thousands attending the protests – and conceded that most of those investigations were for “mischief, thefts, hate crimes and property damage.” Six of the seven arrests on Sunday were on charges of “mischief.”

The relatively minor police action – and the victims of said action, like Charlebois – contrast with the image of the protesters that leftist Prime Minister Justin Trudeau has attempted to cultivate. Discussing the protesters during a last-minute visit to Parliament on Monday, Trudeau repeatedly accused the protesters of displaying “swastikas.” He has in the past equated distrust of coronavirus vaccine products with racism and misogyny. More recently, he referred to mandate opponents as wearers of “tinfoil hats.”

Trudeau has taken a less hard line against the protesters than Ottawa Police Chief Peter Sloly, however, who has threatened to dislodge the honking truckers by any means necessary.

“All options are on the table, from negotiation through to enforcement,” Sloly said of removing the protesters last week. Trudeau has personally intervened to remove both options mentioned, refusing to meet with or address protesters’ concerns in any way, but also asserting that military intervention was “not in the cards” at the moment. The different approaches have created an appearance of significant tension between Trudeau and Ottawa police.

“This is a national issue, not an Ottawa issue,” Sloly told city councillors on Wednesday. “I am increasingly concerned there is no policing solution to this.”

Trudeau also appeared to have lost support from the left, which has grown increasingly frustrated with the fact that the protests not only appear not to be waning, but have expanded into other cities such as Montreal, Toronto, and Vancouver.

“Where is the Prime Minister? Has he got nothing? What is he doing about this?” a column in the Globe and Mail national newspaper asked on Tuesday.

Radical leftist New Democratic Party leader Jagmeet Singh took the lead this week in criticizing Trudeau from the left, asserting that the prime minister has “not been visible” and calling an emergency Parliament meeting to address the protests in the absence of any action by Trudeau. Trudeau attended the emergency meeting, where lawmakers urged him to provide ideas and solutions to end the protests and generally quell public unrest.

Simon Kent contributed to this reporting.