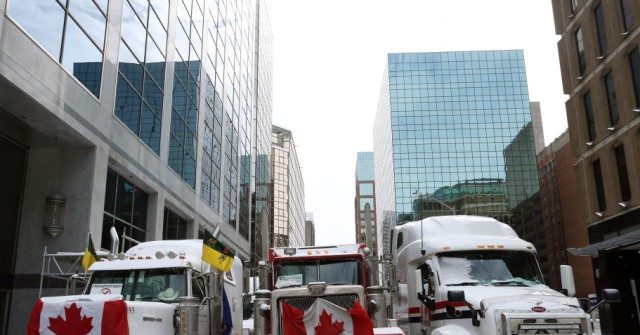 Tow truck companies, contracted by the City of Ottawa, are refusing all of the requests to take heavy vehicles associated with the “Freedom Convoy” from the downtown area, according to city manager Steve Kanellakos who told reporters on Monday.

The top city official explained that all of the tow truck operators from the list of companies the city typically uses to provide tow services have unilaterally said “no” to any request. Global News reported that the demonstrations are headed into the second week of protest.

“We’ve contacted them all and they’re all refusing … to provide heavy tow truck work,” Kanellakos said in a press conference. However, he explained that the tow truck operators are still doing “light” work, not heavy trucks and larger vehicles.

“Many of them or most of them don’t want to do the work, especially the heavy tow truck work, because they rely on the heavy truck industry for their livelihood and they don’t want to damage that part of their business,” Kanellakos explained.

The city’s mayor, Jim Watson, has reportedly been in touch and asked for resources from city officials in Toronto, Brampton, and other Ontario cities, according to Kanellakos. He also explained that the problems removing the “Freedom Convoy” are happening all over and not “an Ottawa-only problem.”

Local police Deputy Chief Steve Bell, not willing to share the specifics, said that the police are trying to find “creative solutions” to remove demonstrators since they do not have any cooperation from tow truck companies.

“We are coming towards a position where we’re not going to let the tow truck operators, and the ability to tow those vehicles out of there, be an obstacle to ending what’s occurring,” Bell said.

The top city officials noted that the city is reviewing its contract with the tow truck operators in order to see “what actions we can take to deal with this unprecedented situation.”