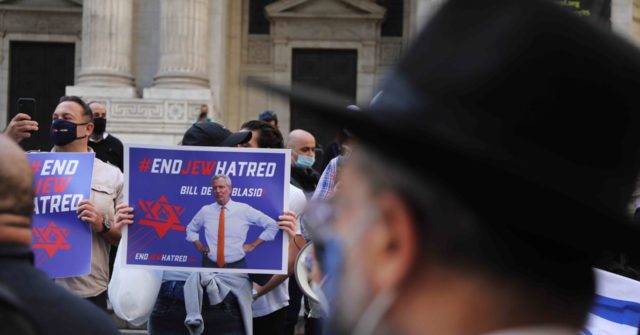 Members of the Orthodox Jewish community in Brooklyn are outraged at the sudden arrival of media “paparazzi” whom they accuse of trying to blame the community for a rise in coronavirus cases.

State and local authorities have clamped down on synagogues and other Jewish institutions, forcing many to close, because of a recent local uptick in cases around the time of the Jewish High Holidays. Gov. Andrew Cuomo (D) singled out the Orthodox Jewish community at a press conference earlier this month.

However, local Jewish community activists believe that they are being discriminated against, arguing that other communities have higher infection rates, and pointing out that elected officials have been supportive of ongoing Black Lives Matter protests.

I’m waiting for ⁦@NYGovCuomo⁩ to issue a statement saying Black Lives Matter gatherings are violating COVID regulations and he’s sending the police in…wait no, that type of language is reserved for Jews only #EndJewHatred pic.twitter.com/D6eE2rFmqB

With the throngs of Paparazzi in #Williamsburg, you would think they found #Hunterbidenlaptop. pic.twitter.com/w9LqEpRs25

Quick a Jew! Get the cameras fast everyone!

The sheer number of reporters flooding the Jewish community the past few days is simply  sickening and dangerous, as they stand around hoping to catch a Jew without a mask. It has reached a level of disgust.

Where was this crowd of reporters when a massive mask-less crowd gathered in Manhattan on Saturday to celebrate the memory of Breonna Taylor?

This behavior is despicable, and these reporters should be ashamed of themselves. The community finally had enough, and began horn-bombing the reporters as they attempted to record their newscasts.

Hello #NYC media, can you hear us now ?

Where were the media mobs, when Jews in #Brooklyn were attacked UNPROVOKED almost daily ?

A reporter was interrupted by heckler (aka hero)in Borough Park, Brooklyn as the fake news media continues to shame the Jewish community for spikes in COVID cases. pic.twitter.com/vpNjQ8fjHG

One journalist from within the community, Jacob Kornbluh, was recently assaulted, prompting condemnations from both Democrats and Republicans.