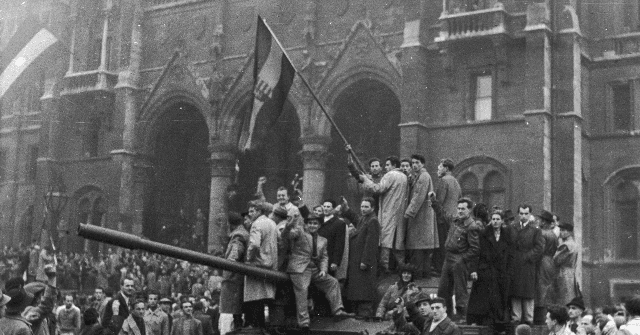 Hungarian prime minister Viktor Orbán believes it is the “calling” of Europe’s conservative former Soviet satellite states to bring their “uncompromising” tradition of anti-communism into the “common store” of Western values.

Orbán issued the calling to mark 30th anniversary of the formation of the Visegrád group of socially conservative countries in Central Europe — not Eastern European, as commonly thought Britain, given their place in the continent’s geographical centre between Western Europe and the nations of the former Soviet Union — namely Hungary, Poland, Czechia, and Slovakia.

The Visegrad countries’ “traditional mission”, the national conservative leader wrote in an article for Magyar Nemzet, a translation of which has been by Breitbart London, was “meaningless for as long as Soviet troops were stationed in our countries”.

“[O]ur horizons were restricted and our strength diverted by the task of freeing ourselves of our own communists and – after the bayonets of the occupiers had disappeared – consigning them to where they belonged: as far as possible from governmental power, to schoolbook compendiums of historical crimes with which we can educate our children and grandchildren, and show them what comes from trying to build a future without the embrace of national ideals and Christian teachings,” he explained.

Today, however, freed from the Soviet yoke and on a path to prosperity after struggling out of the economic wreckage of the old Eastern Bloc’s collapse, Orbán is turning a critical eye on North America and the Western European countries, many of which have a hand in Central Europe’s governance via the European Union.

On the hard-hitting realisations that came to central Europe after the migrant crisis, he wrote, it had become clear that Western Europe was now moving in a wholly new, and damaging direction. Orvan said they had been “redefining the essence of Europe, and had been steadily working on the implementation of their programme. ”

“They did not see Europe’s mission as repelling external attacks against Christianity, or as preserving our internal diversity. Their new European mission had become complete openness: the elimination of borders – or at most their existence as only a temporary, necessary evil; gender roles and family models that can be changed at will; and policy that sees the obligation to maintain our cultural heritage as a task that should rather be left to museologists,” he lamented.

Hungarian PM: ‘The Spirit of Marx, Lenin, and the Re-Education Camps’ Lives on in the EU https://t.co/nOmkbrK055

“In this situation in Europe, we Hungarians can clearly see the essence of our European calling,” wrote Orbán, noting that the hyper-diversity and state-sponsored multiculturalism backed by many of the European Union’s leaders is something they wish to force on the entire bloc, with conservative-minded countries not given the option to opt-out.

“It is to bring the uncompromising anti-communist tradition into the common store of European values. It is to place the crimes and lessons of international socialism alongside the crimes and lessons of national socialism,” declared the former anti-communist activist, who was famously pictured being detained by communist-era police with a club across his throat by the old regime as a young man.

“Not to defend oneself is de facto surrender, and its consequence will be complete civilisational transformation – as experienced at close quarters by nations in the Balkan neighbourhood on Europe’s southern and eastern perimeter,” he added, perhaps referring to regions such as Eastern Thrace and Islanbul, formerly Constantinople, where the last vestiges of the old Byzantine Greek culture and people are on the verge of extinction.

“[I]t is certain that our nations fully appreciate the responsibility they bear for the future of Europe: to defend it against external attacks and to defend it from internal imperial designs, maintaining the sovereignty of our homelands and nations,” Orbán vowed.